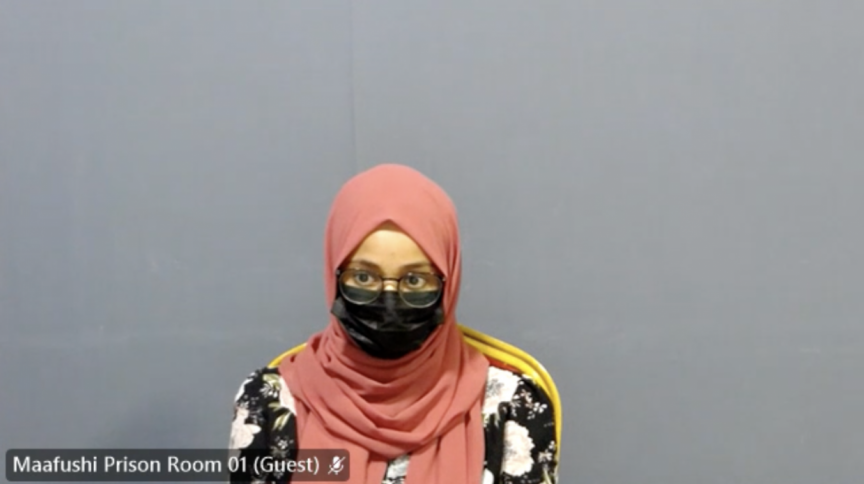 Haleemath Lamha Abdul Rahman attends a hearing at the Criminal Court on May19, 2022. Lamha is charged as an accomplice in the murder of IGMH nurse Mary Grace Oned Pineda.

The prosecution has produced over 100 corroborative evidence against Haleemath Lamha, charged as an accomplice in the murder of IGMH nurse Mary Grace Oned Pineda.

Mary was killed in her apartment on the first floor of Ma. Udhuheykokaage in Male’ City in the afternoon of October 19, 2021.

Her husband, Marvin S. Y. Vargas, 30, was charged with murder with intent in connection to her death.

Lamha, who was having an affair with Marvin, was charged as an accomplice to the murder.

Apart from this, she is charged with knowingly taking unauthorized control over the property of another after police found two syringes from IGMH which she had not been authorized to take out of the hospital hidden in an envelope in her bedroom.

She is also charged with carrying out an activity that requires permission from an authority, without obtaining permission from the relevant authority after police found a type of drug issued only for the use of hospitals and health facilities during a search of her bedroom.

Meanwhile, Lamha submitted 11 in her defense to include IGMH’s Director General of Pharmacist, Medical Officer Dr. Yoosuf Shan and the doctor who conducted postmortem examination as witnesses.

Sun’s journalist Ahmed Saiil Ali is also listed as a defense witness – in order to establish the manner her interview regarding the case was obtained for the news outlet.

Two individuals identified as Lamha’s housemates have also been submitted as defense witnesses. This is to prove Mary and Marvin’s daughter gone to Lamha’s house with her.

Lamha faces a minimum of six years and four months in prison should she be convicted on all three charges.

It had been Marvin who had taken Mary’s body to IGMH in an ambulance on October 19. He initially claimed her death as a suicide by hanging, and later changed his story and said she had suddenly collapsed.

Police found the death suspicious and opened an investigation into the case.

Both Marvin and Lamha had also worked as nurses at IGMH. Their trials are being held separately.

Lamha admitted to her affair with Marvin in an interview to Sun last year. She claimed they ended their relationship a day before Mary’s death, but got back together again.