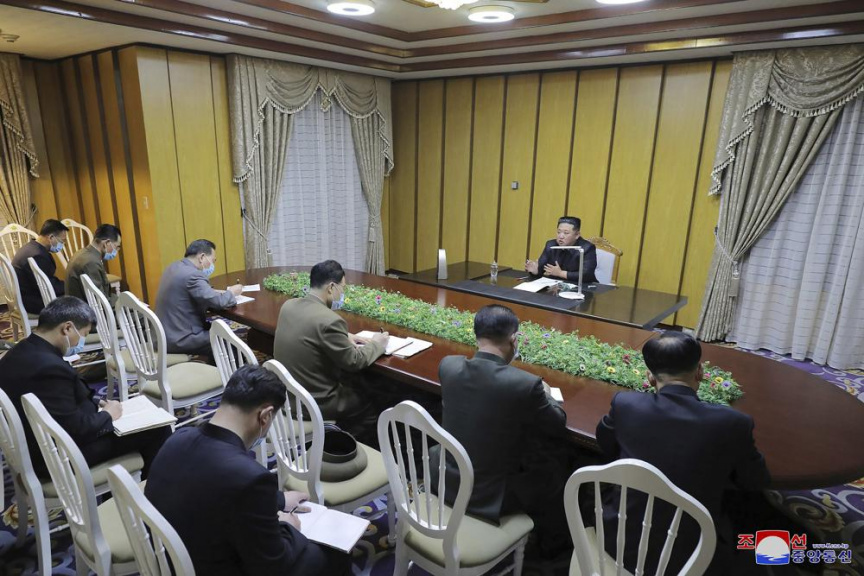 SEOUL, South Korea (AP) — Six people have died and 350,000 have been treated for a fever that has spread “explosively” across North Korea, state media said Friday, a day after acknowledging a COVID-19 outbreak for the first time in the pandemic.

North Korea likely doesn’t have sufficient COVID-19 tests and said it didn’t know the cause of the mass fevers. But a big COVID-19 outbreak could be devastating in a country with a broken health care system and an unvaccinated, malnourished population.

The North’s official Korean Central News Agency said of the 350,000 people who developed fevers since late April, 162,200 have recovered. It said 18,000 people were newly found with fever symptoms on Thursday alone, and 187,800 people are being isolated for treatment.

One of the six people who died was infected with the omicron variant, KCNA said, but it wasn’t immediately clear how many of the total illnesses were COVID-19.

North Korea imposed a lockdown Thursday after acknowledging its first COVID-19 cases. Those reports said tests from an unspecified number of people came back positive for the omicron variant.

It’s unusual for isolated North Korea to admit to the outbreak of any infectious disease, let alone one as menacing as COVID-19, as the country is intensely proud and sensitive to outside perception about its self-described “socialist utopia.”

While North Korean leader Kim Jong Un had occasionally been candid about his worsening economy and other problems in recent years, he had repeatedly expressed confidence about North Korea’s pandemic response and wasn’t seen wearing a mask in public until a ruling party meeting Thursday when the North announced the COVID-19 infections.

The spread of the virus was possibly accelerated by a massive military parade in Pyongyang on April 25, where Kim took center stage and showcased the most powerful missiles of his military nuclear program in front of tens of thousands.

Cheong Seong-Chang, an analyst at South Korea’s Sejong Institute, said the pace of the fever’s spread suggests the crisis could last months and possibly into 2023, causing major disruption in the poorly equipped country.

Some experts say the North’s initial announcement communicates a willingness to receive outside aid.

According to the latest figures from the World Health Organization, North Korea reported to the U.N. agency that it tested 64,207 people for COVID-19 in 2020 through March 22 of this year, a small number that may indicate insufficient tests for a population of 26 million.

The North last year shunned millions of shots offered by the U.N.-backed COVAX distribution program, including doses of AstraZeneca and China’s Sinovac vaccines, possibly because of questions about their effectiveness and unwillingness to accept monitoring requirements. The country lacks the extreme-cold storage systems that are required for mRNA vaccines like Pfizer and Moderna.

The office of South Korean President Yoon Suk Yeol, who began his single five-year term on Tuesday, said his government is willing to provide vaccines and other medical supplies and hopes to talk to the North about specific plans. It said the North hasn’t yet asked for the South’s help.

Boo Seung-chan, a spokesperson in South Korea’s Unification Ministry, which handles inter-Korean affairs, said Seoul doesn’t immediately have an estimate on the number of vaccine doses it could offer to North Korea.

Inter-Korean relations have deteriorated over the past three years amid a stalemate in larger nuclear negotiations between Washington and Pyongyang, which derailed over disagreements about exchanging the release of crippling U.S.-led sanctions against the North and the North’s disarmament steps.

“As its comrade, neighbor and friend, China stands ready to provide full support and assistance to the DPRK in the fight against the epidemic,” Zhao told reporters at a daily briefing, using the initials for North Korea’s official name, the Democratic People’s Republic of Korea.

He said the spread of the fever has been centered around the capital, Pyongyang, and underscored the importance of isolating all work and residential units from one another while providing residents with every convenience during the lockdown.

“It is the most important challenge and supreme tasks facing our party to reverse the immediate public health crisis situation at an early date, restore the stability of epidemic prevention and protect the health and wellbeing of our people,” KCNA quoted Kim as saying.

North Korea’s claim of a perfect record in keeping out the virus for two and a half years was widely doubted. But its extremely strict border closure, large-scale quarantines and propaganda that stressed anti-virus controls as a matter of “national existence” may have staved off a huge outbreak until now.

Hours after confirming the COVID-19 outbreak Thursday, North Korea launched three short-range ballistic missiles toward the sea in what possibly was meant to be a display of its strength. It was the North’s 16th round of missile launches this year.

“We do continue to support international efforts aimed at the provision of critical humanitarian aid to the most vulnerable North Koreans, and this is, of course, a broader part of the DPRK continuing to exploit its own citizens by not accepting this type of aid,” Psaki said Thursday in Washington.

“It’s not just vaccines. It’s also a range of humanitarian assistance that could very much help the people and the country and instead they divert resources to build their unlawful nuclear and ballistic missiles programs.”