No honor guard for Real Madrid as Atlético beats champion 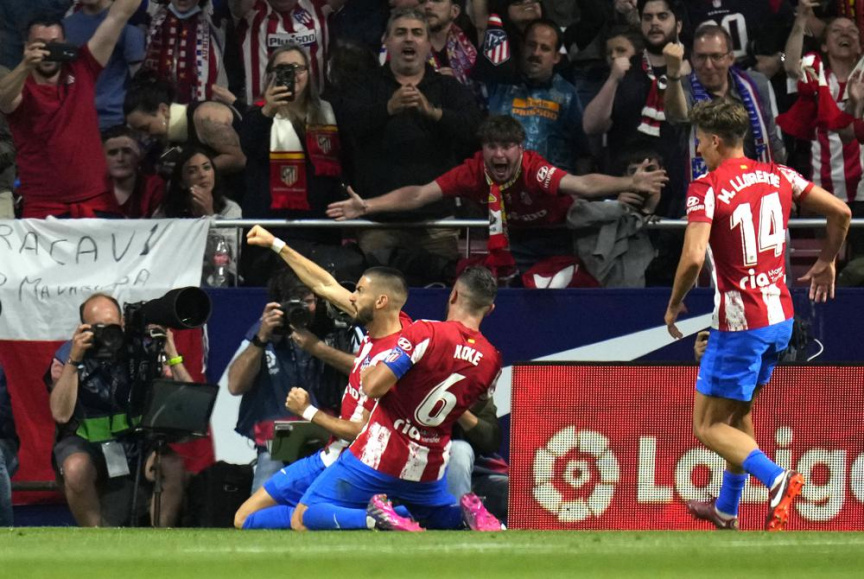 MADRID (AP) — After keeping a promise that it wouldn’t give Real Madrid an honor guard before the game, Atlético Madrid went on to beat the newly crowned Spanish league champion 1-0 Sunday and moved closer to securing a Champions League spot.

Atlético clinched the victory in the last city derby of the season with a 40th-minute penalty kick converted by Yannick Carrasco in the first win against its rival since 2018.

It gave fourth-place Atlético a six-point advantage over fifth-place Real Betis, the first team outside the Champions League spots with three rounds to go. Betis lost 2-1 at home to second-place Barcelona on Saturday.

Sevilla stayed one point in front of Atlético after salvaging a stoppage-time 1-1 draw at Villarreal earlier Sunday.

“We have three matches left but this was an important step toward reaching our goal,” Atlético coach Diego Simeone said.

Madrid’s fans wanted Atlético to keep a tradition whereby players line up to applaud their opponents as they enter the field before kickoff. But Atlético said ahead of the match that it was not going to do this to avoid upsetting its fans at the Wanda Metropolitano Stadium.

Madrid was coming off its epic victory over Manchester City to advance to the Champions League final.

“It was an even match,” Madrid coach Carlo Ancelotti said. “We couldn’t have asked for much more after the week we had. I didn’t expect much more than this, to be honest.”

The penalty came after a video review to check on a controversial foul by Madrid defender Jesús Vallejo on Atlético forward Matheus Cunha.

Atlético had won only one of its last six games in all competitions — 2-1 against Espanyol in the Spanish league two rounds ago. Since then it had drawn at home against relegation-threatened Granada and lost at Athletic Bilbao.

Jules Koundé scored deep into stoppage time as Sevilla escaped with a draw at Villarreal to stay one point ahead of Atlético and seven points in front of Seville city rival Betis.

Koundé found the net five minutes into stoppage time after getting to a loose ball inside the area in one of the last plays of the game. Sevilla goalkeeper Bono also was in the area trying to score the equalizer.

Villarreal, coming off elimination from the Champions League after a home loss to Liverpool on Tuesday, had opened the scoring with Giovani Lo Celso in the 86th.

It was the second consecutive winless game for Unai Emery’s team, which stayed in seventh place.

“We suffered a lot,” Koundé said. “It was an important goal that gives us a point in a complicated field after we didn’t play well. We know how important it is to stay in the Champions League places. We have to lock that spot as soon as we can.”

Koundé’s goal came in Sevilla’s only second shot on target at the La Cerámica Stadium.

Rayo Vallecano mathematically secured its position in the first division with a 0-0 draw at Getafe.

Radamel Falcao was a second-half substitute for midtable Rayo, which had returned to the top flight this season after two consecutive years in the second division.

Getafe is not yet out of danger of being demoted for the first time since 2016. It sits in 15th place, five points above the relegation zone.

Espanyol earlier Sunday drew 1-1 with Osasuna at home in a match between teams far from the relegation zone.

EA Sports to be title sponsor of Spanish league in '23