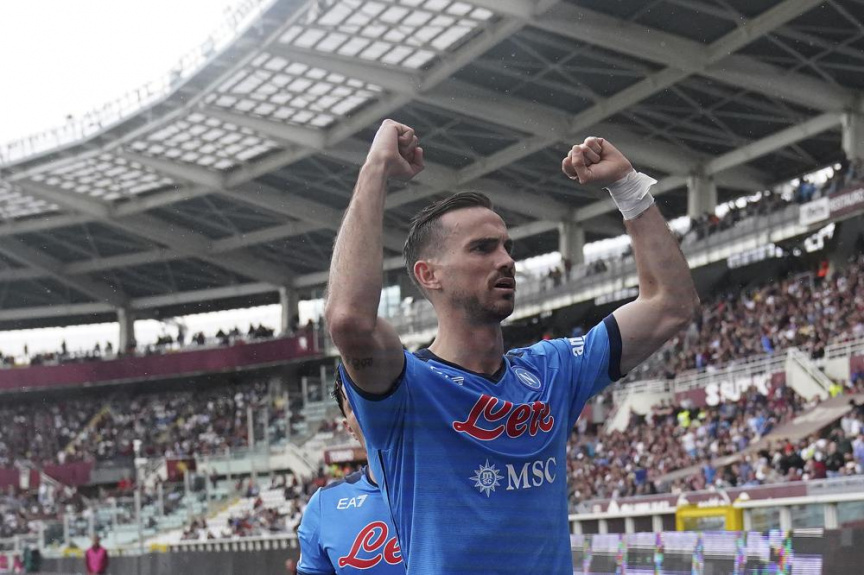 Napoli's Fabian Ruiz celebrates after scoring his side's first goal during the Italian Serie A soccer match between Torino and Napoli at the Olympic Stadium in Turin, Italy, Saturday, May 7, 2022. (Spada/LaPresse via AP)

MILAN (AP) — Napoli won at Torino 1-0 despite missing a penalty and consolidated third place in Serie A on Saturday.

Fabián Ruiz scored in the second half after Lorenzo Insigne had another spot kick saved.

Napoli moved four points above fourth-placed Juventus, which lost at Genoa 2-1 on Friday following two late goals from the home side.

It is five points behind league leader Inter Milan, with two matches remaining, and its title aspirations all but over.

Napoli had a great chance to break the deadlock on the hour mark when Torino defender Armando Izzo tripped Dries Mertens in the area but Insigne’s penalty was saved.

It was the fourth time this season that Insigne has failed to convert a penalty.

The visitors did take the lead in the 73rd when Ruiz stole the ball off Tommaso Pobega in the middle of the Torino half and mazed his way into the area before drilling into the bottom left corner.

Lazio boosted its chances of qualifying for Europe with a 2-0 win at Sampdoria, which was still not safe from relegation.

Patric’s first Serie A goal was shortly before halftime and Luis Alberto doubled the lead after the break.

Sampdoria remained five points clear of the drop zone ahead of the rest of the weekend’s matches.

Sassuolo drew at home with Udinese 1-1.