Special envoy: Lack of breakthrough in probe into wider links of May 6 attack concerning 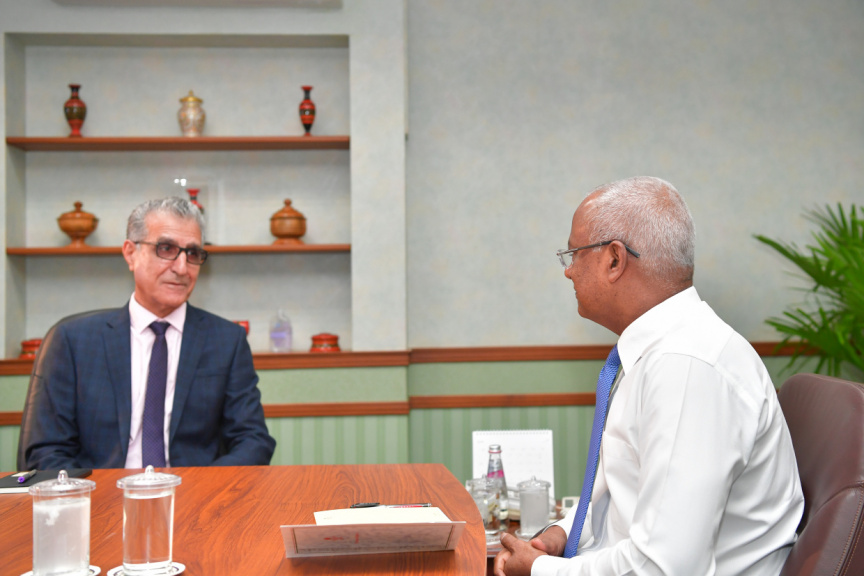 Abbas Faiz, the Special Envoy to the Government of Maldives to monitor the investigation, prosecution and trial process of the terrorist attack against the Speaker of the Parliament and former President Mohamed Nasheed meets President Ibrahim Mohamed Solih on May 12, 2021. (Photo/President’s Office)

Abbas Faiz, special envoy to the Maldivian government to monitor the investigation, prosecution and trial of the May 6 terror attack states that while the investigation of the physical attack itself, and that of the financial footprints of the accused linked to the physical attack was strong and conducted in line with international best practice, he found the lack of breakthrough in the investigation into any wider links and wider financial motives of the attackers as well as the delay in the trials of the accused concerning.

A homemade remote-controlled IED was strapped to motorcycle parked nearby Parliament Speaker, former President Mohamed Nasheed’s residence, and was detonated at 08:27 pm on May 6, 2021, just as Nasheed exited his residence and went to get in his car. Nasheed was thrown to the ground and sustained multiple shrapnel wounds, while three members of his security detail and two bystanders sustained minor wounds.

In a statement on Friday, as Maldives observes one year to the one of the worst terror attacks to take place on Maldivian soil, Faiz said expressed satisfaction at the investigation of the physical attack itself, as well as the cooperation between the prosecution and the police – which he said helped build strong cases against the accused.

Faiz noted the concern in Maldives that the May 6 attack could not have been planned and executed without encouragement and financial support from outside the current circle of suspects, and stressed the need to have the investigation into any wider links and wider financial motives of the attackers remain a crucial part of the process of investigation.

“It is a concern that there has been no breakthrough in this area of the investigation. Maldives Police Service need to redouble their efforts and conduct a detailed and rigorous investigation that could yield results on a par with their success in investigating the physical attack,” he said.

Faiz said the success in that part of the investigation could yield positive results not just for the prosecution and trial of any other elements linked to the May 6 attack, but also for the protection of politicians, personalities, and civil society activists against attacks of a similar kind.

Faiz also expressed concern over the delay in the trials of the accused, which he warned could erode confidence in the criminal justice system.

“Trials have not kept pace with the time bound momentum of the investigation and prosecution. Long trial delays of the kind we have witnessed in the cases of May 6 attack can have the negative impact of eroding confidence in the criminal justice system,” he said.

Faiz said that expectations that May 6 attack trials need to be expedited were legitimate because of the far-reaching impact of the attack on society, social harmony, and political health of the country.

He said that he had shared his concerns with Chief Justice Ahmed Muthasim Adnan as well as members of the Judicial Service Commission.

“There is an urgent need for renewed efforts towards ensuring that these trials take place without further delays,” he said.

Nine suspects were charged in connection to the attack. However, only one,  Adhuham Ahmed Rasheed, 26, who confessed to detonating the IED, was convicted. He was sentenced to 23 years in prison in December last year after he signed a plea deal with the state.

The other eight defendants are:

An additional suspect arrested in the case – Ahmed Fathih, Dunfiniufaa, L. Gan – was released due to insufficient evidence.