Inside the Met Gala: Glitter, glamour and 275,000 pink roses 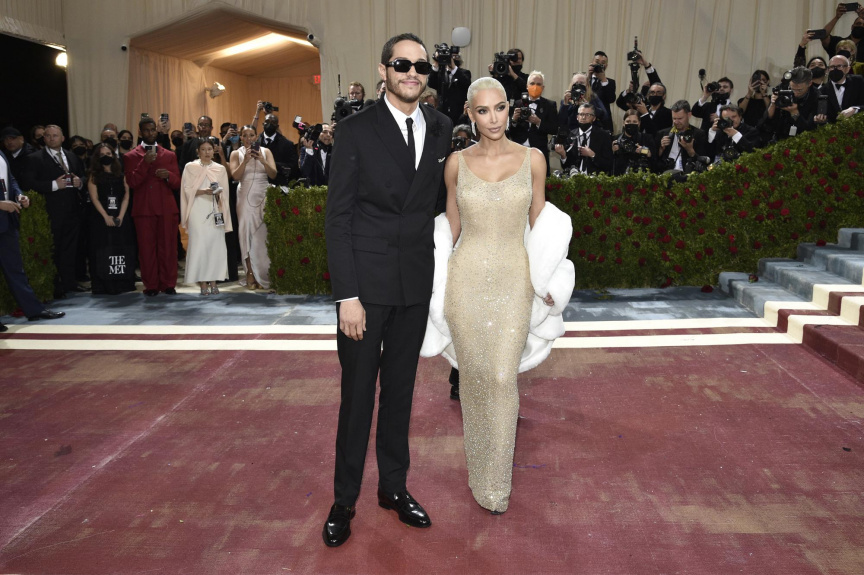 Kim Kardashian, right, and Pete Davidson attend The Metropolitan Museum of Art's Costume Institute benefit gala celebrating the opening of the "In America: An Anthology of Fashion" exhibition on Monday, May 2, 2022, in New York. (Photo by Evan Agostini/Invision/AP)

NEW YORK (AP) — Met Galas, he’s been to a few. But James Corden, schmoozing at this year’s cocktail reception, looked around and pronounced that this might be his favourite yet.

The TV host waved his arm around the room, taking in the hundreds of guests who’d followed the sartorial instructions – “gilded glamour” — and came in the best Gilded Age finery they could muster. Elegant gowns, shimmering with gold. Classic black and white. Tails and even some tophats. Headpieces and bustles and perhaps the accessory of the night: the tiara, sported by none other than Vogue’s Anna Wintour, who runs the gala, wearing a family heirloom. Even allowing for creativity, this was not the night for artfully ripped jeans.

Of course, take one letter off “classy” and you have “class,” with all the tricky implications of channelling an era that saw the creation of excessive wealth and income inequality in the United States. Some guests wrestled with that thought as they pondered the meaning of the evening. Others pointed out, accurately, that the gala funds the Met’s Costume Institute, allowing for exhibits such as “In America: An Anthology of Fashion,” which opens this week and seeks to uncover unsung heroes and untold stories in American fashion history, especially women, and women of colour.

Others said the night was an important way of showing that New York was back in full force, even with the pandemic still upon us. “We’re celebrating craftsmanship and we’re celebrating America,” said celebrity chef Marcus Samuelsson, who again this year curated the night’s menu, choosing a slate of female chefs and taking on the main course himself — a barbecue-style beef, he said, with corn and succotash. “We’re showing that New York is back.”

Certainly, New York florists were back, if they hadn’t been already. The question is whether there were any roses left in New York after Monday’s gala. The outside steps to the Metropolitan Museum of Art were lined with 50,000 in deep pink, with another 75,000 surrounding the lobby centrepiece. Another 150,000 roses bathed every inch of the Great Hall staircase — a striking backdrop for the hosts’ receiving line.

Also striking: The giant centrepiece, this year the tallest it’s ever been — a 50-foot, golden creation representing the torch in the hand of Lady Liberty. (Museum officials said this year for the first time, the centrepiece will remain in place another day, for public view).

As guests entered from the red carpet, with crowds screaming outside, they passed a 12-piece chamber orchestra that played American classics like “At Last” until dinner. After greeting, Wintour and her celebrity hosts (Blake Lively and Ryan Reynolds, Lin-Manuel Miranda and Regina King) guests wandered through the Arms and Armor galleries toward the American Wing and the huge Charles Engelhard Court, where cocktails were served and where curators built a bridge to access the exhibit in the period rooms.

Mostly, guests eschew the exhibit for the cocktails, but there was a decent flow of people in and out of the show, for which nine-film directors were tapped to create cinematic vignettes. It was, said some of the directors, a chance to engage in a different kind of storytelling.

“It was really fun,” said Tom Ford, not only a top fashion designer but one of those nine directors. Ford, assigned a room housing a grand, circular painting of Versailles and its gardens, chose to dramatize the story of the Battle of Versailles – a famous night for American fashion in 1973, when American sportswear designers showed up their French couture counterparts. Ford decided to stage a real conflict, involving weapons like fencing foils. “My 9-year-old kid was watching a lot of ‘Mulan,’” he quipped when asked about his inspiration. “I’d better go see that now,” said actor and producer-director Mindy Kaling, who’d been chatting with Ford. “Yes!” he encouraged her, and off she went.

Inside the exhibit, meanwhile, director Autumn de Wilde (“Emma”) was showing her own work in the period rooms to a few friends. “That woman has probably just lost the house with her gambling,” she said, pointing to a clearly distressed woman mannequin next to an overturned cards table. “I wanted to show how messy people’s lives are,” she said. “A beautiful home doesn’t mean a beautiful life.”

At that moment, a real “Gilded Age” character walked in — actress Denée Benton, who stars in HBO’s series of the same name. She congratulated de Wilde for her work, and de Wilde told her she was “obsessed” with her show.

Benton may not have chosen to wear a Gilded Age bustle, but Franklin Leonard did — two of them, actually. Leonard, a film executive who helped curator Andrew Bolton pick the diverse slate of film directors for the exhibit, said he was channelling Frederick Douglass in a coat that had not one bustle but two — on either side — one of the more clever looks of the night.

“I guess it’s a double bustle,” he said, crediting designer Ken Nicholson. Leonard, attending his first gala, said it was a surreal experience. “I, the captain of the high school math team in Columbus, Georgia, never thought I’d be wearing a double bustier jacket, inspired by Frederick Douglass, at the Met Ball,” he said. “It wasn’t part of the plan.”

“Listen,” Leonard said, pondering the uneasy balance between art and excess. “For all the excess, this is a fundraiser for the Costume Institute.” And he was said to be proud to have helped put together the slate of filmmakers for the show, who include not only gala hosts Ford and King but Radha Blank, Janicza Bravo, Sofia Coppola, Julie Dash, de Wilde, and Chloé Zhao, last year’s Oscar winner. “They were the best group of filmmakers out there,” he said.

Though many sipping cocktails and munching on coconut ceviche hors d’oeuvres were gala veterans – from actors like Sarah Jessica Parker, a gala stalwart, to designers like Thom Browne – there were a number of first-timers. One was Kieran Culkin — star of another series about excessive wealth, “Succession” – who professed to not knowing yet what he thought of the gala because he’d only had time to do three things. “I tied my shoes,” he said. “I went to the men’s room, and now I’ve ordered a Coke — straight Coke. They put a lime in it. Not usually my thing.” He headed off to see the exhibition.

For many gala first-timers, the most surreal part is seeing such a concentration of famous people from all walks of life, where there’s always someone more famous around the corner. Or when, as happened Monday night, a fun band starts snaking through cocktails, with drums and a tuba and a guy leading it with a melodica, you look more closely and the melodica guy is Jon Batiste, who just won five Grammys.

Another first-timer, New York City Mayor Eric Adams, wasn’t even the only New York mayor in attendance — Michael Bloomberg was there, too.

Adams, who wore a tuxedo with the words “End Gun Violence” on the back and featuring other symbols of the city he has run for several months, said he was thinking about the “very real” income inequality that stemmed from the Gilded Age, as the city now recovers from the pandemic.

Noting that the wealthiest two percent of the city was represented in the room, he said his role was “to come among these New Yorkers and talk about the issues that the other 98% of New Yorkers need that are not in this room …. Not to divide us, but to unite us.”

Adams also joked about a tabloid report that he had been dying to come to the gala for years.

“They’ve been trying to get ME to come for years,” he quipped. “They wanted a mayor with swagger.”