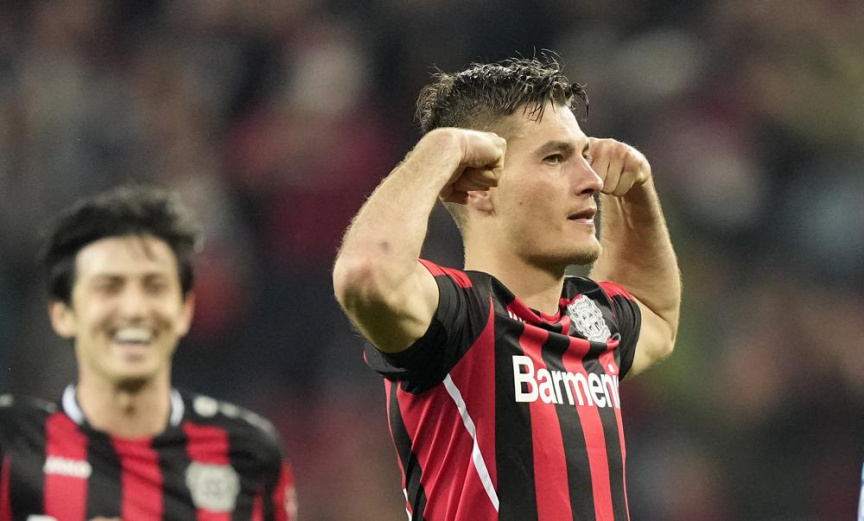 BERLIN (AP) — Bayer Leverkusen consolidated third place and Leipzig dropped out of the Bundesliga top four after contrasting fortunes for both in their quest for Champions League qualification on Monday.

Leipzig slipped to its second consecutive defeat when 10-man Borussia Mönchengladbach won their game 3-1 to move to 10th. That left visiting Leipzig fifth, one point behind Freiburg, which has the last qualification place for the Champions League with two rounds remaining.

Before the previous round, Leipzig was third until visiting Union Berlin struck late to win 2-1 and end the team’s 15-game unbeaten run across all competitions.

Goals in each half from Paulinho and Patrik Schick gave Leverkusen a 2-0 win at home over Eintracht Frankfurt.

In Mönchengladbach, the home supporters protested against Monday night games and Leipzig with a large banner behind one of the goals, while any time a Leipzig player had the ball he was subjected to a chorus of whistles from the fans.

Leipzig is frequently the subject of opposing teams’ fans’ protests. The club, which was founded only in 2009, is widely resented for its fast rise from the lower divisions to the Bundesliga on the back of massive investment from energy drinks manufacturer Red Bull.

Freiburg, which Leipzig will face in the German Cup final on May 21, has vetoed the use of its club crest or logos for any potential joint merchandise endeavors with Leipzig for the final.

Up 2-1, Gladbach defender Nico Elvedi was sent off in the 64th minute for bringing down Christopher Nkunku. The French attacker would have been through on goal with only goalkeeper Yann Sommer to beat.

Jonas Hofmann’s second goal in the 77th allayed the home fans’ fears of a Leipzig comeback.

Leipzig could also reach the Champions League by winning the Europa League. Domenico Tedesco’s team has a 1-0 lead over Glasgow Rangers going into the second leg of their semifinal on Thursday.

Robert Lewandowski says time at Bayern Munich is ‘over’