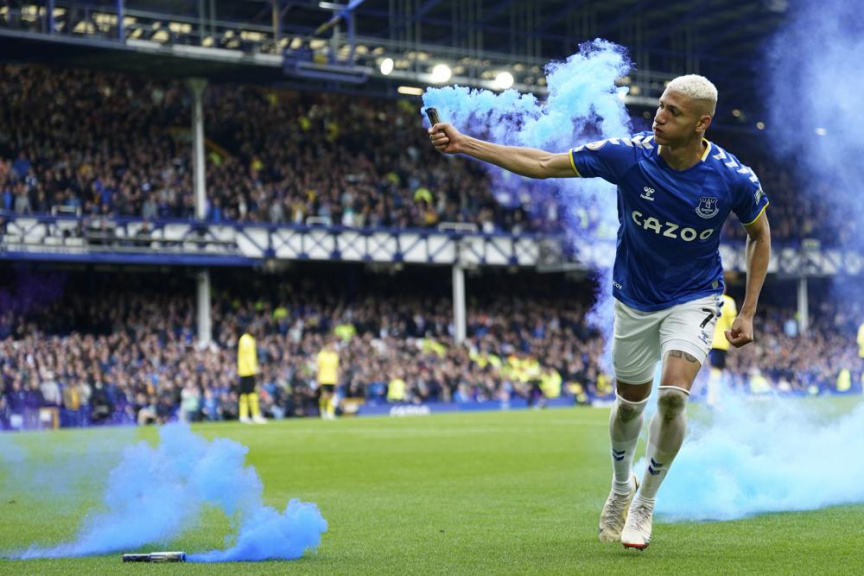 Everton's Richarlison ruins with a flare as he celebrates after scoring his sides first goal during the Premier League soccer match between Everton and Chelsea at Goodison Park in Liverpool, England, Sunday, May 1, 2022. (AP Photo/Jon Super)

LIVERPOOL, England (AP) — Everton forward Richarlison threw a lit flare back into the stand after picking it up from the field while celebrating scoring to secure a 1-0 victory over Chelsea on Sunday that helped his team’s push to avoid relegation from the Premier League.

Everton moved two points from safety with five matches remaining and a game in hand over both Leeds and Burnley.

The goal came 59 seconds into the second half at Goodison Park. Richarlison and Demarai Gray pressured Chelsea defender Cesar Azpilicueta into losing possession and the Brazilian benefited by sweeping a shot past goalkeeper Edouard Mendy.

Chelsea remained third in the standings despite losing to the team managed by its former player and coach, Frank Lampard.

Richarlison’s four goals in his last five league matches are as many as he scored in his first 21 games of the season. They are helping Everton’s bid to extend its 67-year stay in the top division.

But it relied on Jordan Pickford’s saves to preserve the win, having faced no shots on target for almost an hour.

There was a superb denial of Azpilicueta after Pickford scrambled across his goal, having been beaten by Mason Mount.

Then came a one-handed save from Ruben Loftus-Cheek’s shot and a low save in stoppage time to block Thiago Silva’s effort.

Ronaldo charged by English FA for incident at Everton

Fulham, Villa win as EPL resumes with tributes to queen

Winless Leicester in turmoil after 5-2 loss at Brighton