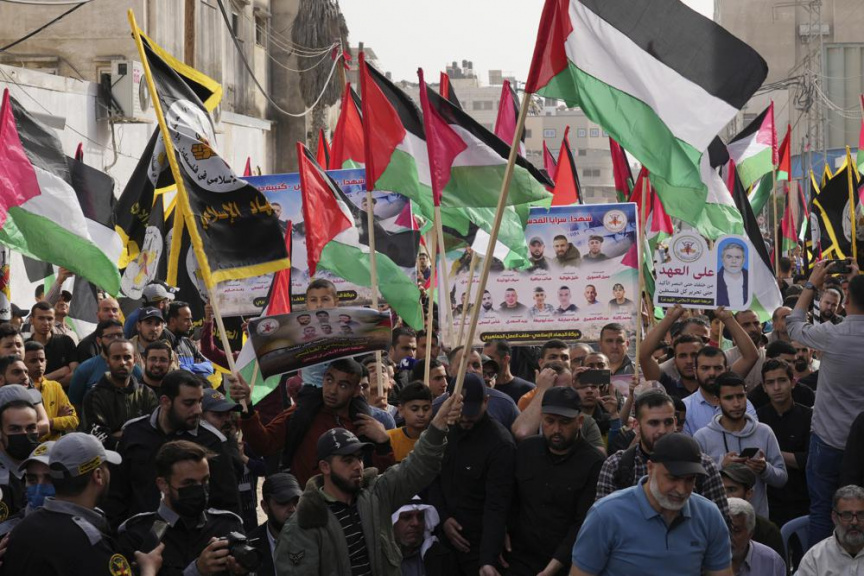 JERUSALEM (AP) — Palestinian assailants shot and killed a security guard at the entrance of a Jewish settlement in the occupied West Bank late Friday, the Israeli military said, in a fresh attack that could further fuel Israeli-Palestinian tensions that have soared in the past two months.

The Israeli military said early Saturday that the attackers arrived at Ariel settlement entrance and shot the guard in his post before fleeing the scene. The military launched a pursuit of the suspects in the West Bank.

In a separate incident, Israeli troops shot and killed a 27-year-old Palestinian man during clashes at Azoun village near the town of Qalqilya early Saturday, the Palestinian Health Ministry said.

A string of Palestinian attacks in Israel and the West Bank over the past two months have left 14 Israelis dead.

Hamas, the militant group ruling Gaza, praised the attack but stopped short of claiming responsibility for it.

“The operation proves that revolution is raging all over the West Bank,” said spokesman Hazem Qassem. “This is a practical implementation of our people’s declaration that Jerusalem is a red line.”

Tensions increased this month at a major Jerusalem holy site, with Palestinian worshippers clashing daily with Israeli police. The site contains Al-Aqsa Mosque, the third holiest site in Islam, and increasing numbers of Palestinians go there to pray during the Muslim holy month of Ramadan.

Earlier Friday, Palestinians hurled stones and Israeli police fired rubber-coated bullets at the site, which has seen a wave of unrest in recent weeks.

The police say Palestinians inside the Al-Aqsa Mosque compound began hurling stones and fireworks around dawn in the direction of a heavily guarded gate that leads to the Western Wall, the holiest place where Jews can pray. The police advanced into the compound, firing rubber-coated bullets.

The violence ended around an hour later after other Palestinians in the compound intervened, convincing the stone throwers and the police to pull back.

The Palestinian Red Crescent emergency service said more than 40 people were wounded, with 22 requiring treatment at local hospitals. It said Israeli forces prevented first responders from entering the compound during the clashes, and that one of its medics was beaten by police.

The police did not immediately respond to a request for comment, but said in a statement they had arrested three people.

The Al-Aqsa Mosque compound is built on a hilltop that is the most sacred site for Jews, who refer to it as the Temple Mount because it was the location of the Jewish temples in antiquity. It has long been a flashpoint in the Israeli-Palestinian conflict.

In recent weeks, Israeli police and Palestinians have clashed there on a number of occasions. Israeli authorities accuse Hamas of inciting violence and say security forces were forced to intervene to halt stone-throwing.

The Palestinians say the presence of Israeli police at the site, and regular visits by increasing numbers of nationalist and religious Jews, are a violation of decades-old informal arrangements governing the site. The visits were halted last week for the last 10 days of the Muslim holy month of Ramadan, which concludes this weekend.