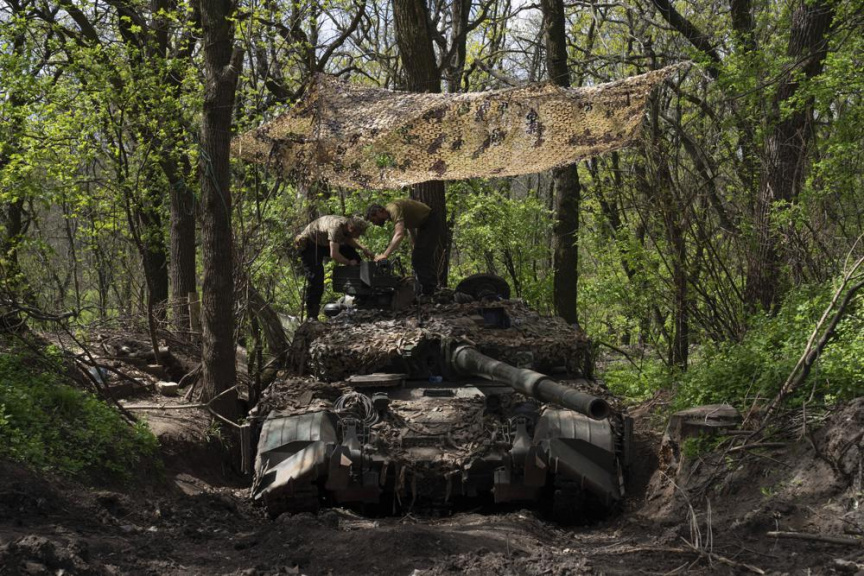 POKROVSK, Ukraine (AP) — Russia cut off natural gas to NATO members Poland and Bulgaria on Wednesday and threatened to do the same to other countries, using its most essential export in what was seen as a bid to punish and divide the West over its support for Ukraine.

The move, condemned by European leaders as “blackmail,” marked a dramatic escalation in the economic war of sanctions and countersanctions that has unfolded in parallel to the fighting on the battlefield.

The tactic, coming a day after the U.S. and other Western allies vowed to rush more and heavier weapons to Ukraine, could eventually force targeted nations to ration gas and could deal another blow to economies suffering from rising prices. At the same time, it could deprive Russia of badly needed income to fund its war effort.

Poland has been a major gateway for the delivery of weapons to Ukraine and confirmed this week that it is sending the country tanks. Just hours before Russia’s state energy giant Gazprom acted, Poland announced a new set of sanctions against the company and other Russian businesses and oligarchs.

Bulgaria, under a new liberal government that took office last fall, has cut many of its old ties to Moscow and likewise supported punitive measures against the Kremlin. It has also hosted Western fighter jets at a new NATO outpost on Bulgaria’s Black Sea coast.

The gas cuts do not immediately put the two countries in any dire trouble. Poland, especially, has been working for many years to line up other suppliers, and the continent is heading into summer, making gas less essential for households.

Also, Russian gas deliveries to both Poland and Bulgaria were expected to end later this year anyway.

Still, the cutoff and the Kremlin warning that other countries could be next sent shivers of worry through the 27-nation European Union. Germany, the largest economy on the continent, and Italy are among Europe’s biggest consumers of Russian natural gas, though they, too, have been taking steps to reduce their dependence on Moscow.

“It comes as no surprise that the Kremlin uses fossil fuels to try to blackmail us,” said EU Commission President Ursula von der Leyen. “Today, the Kremlin failed once again in his attempt to sow division amongst member states. The era of Russian fossil fuel in Europe is coming to an end.”

Gazprom said it shut off the two countries because they refused to pay in rubles, as President Vladimir Putin has demanded of “unfriendly” nations. The Kremlin said other countries may be cut off if they don’t agree to the payment arrangement.

Most European countries have publicly balked at Russia’s demand for rubles, but it is not clear how many have actually faced the moment of decision so far. Greece’s next scheduled payment to Gazprom is due on May 25, for example, and the government must decide then whether to comply.

Polish Prime Minister Mateusz Morawiecki told his country’s parliament that he believes Poland’s support for Ukraine — and the new sanctions imposed by Warsaw on Tuesday — were the real reasons behind the gas cutoff.

Bulgarian Prime Minister Kiril Petkov called the suspension blackmail, adding: “We will not succumb to such a racket.”

Ukrainian President Volodymyr Zelenskyy said that Russia views gas as a weapon for political blackmail and “sees a united Europe as a target.”

On the battlefield, fighting continued in the country’s east along a largely static front line some 300 miles (480 kilometers) long.

Russia claimed its missiles hit a batch of weapons that the U.S. and European nations had delivered to Ukraine. One person was killed and at least two were injured when rockets hit a residential neighborhood in Kharkiv.

Western officials, speaking on condition of anonymity to discuss intelligence findings, said Russia has made slow progress in the eastern Donbas region, with “minor gains,” including the capture of villages and small towns south of Izyum and on the outskirts of Rubizhne.

Serhiy Haidai, the governor of the Luhansk region, conceded that Russia has made minor progress in its advance on Rubizhne through its nearly constant bombardment, but that Ukrainian troops are fighting back and retreating only when there is nothing left to defend.

“There is no point in staying on territory that has been fired on so often that every meter is well known,” he said.

The Western officials said some Russian troops have been shifted from the gutted southern port city of Mariupol to other parts of the Donbas. But some remain in Mariupol to fight Ukrainian forces holed up at the Azovstal steel plant, the last stronghold in the city. About 1,000 civilians were said to be taking shelter there with an estimated 2,000 Ukrainian defenders.

“The situation is very difficult. There are huge problems with water, food,” Serhii Volynskyi, commander of the marine unit inside the plant, said in a Facebook video message. He said hundreds of fighters and civilians were wounded and in need of medical help, and those inside included children, older people and disabled people.

In the Black Sea port city of Kherson, which Russian forces have occupied since early in the war, a series of explosions boomed late Wednesday near the television tower and at least temporarily knocked Russian channels off the air, Ukrainian and Russian news organizations reported.

Just across the border in Russia, an ammunition depot in the Belgorod region burned after several explosions were heard, the governor said. Blasts were also reported in Russia’s Kursk region near the border, and authorities in Russia’s Voronezh region said an air defense system shot down a drone.

Earlier this week, an oil storage facility in the Russian city of Bryansk was engulfed by fire.

Ukrainian presidential adviser Mykhailo Podolyak hinted at the country’s involvement in the fires, saying in a Telegram post that “karma (is) a harsh thing.”

— The head of the International Atomic Energy Agency, Rafael Grossi, said the safety level at Europe’s largest nuclear plant, now under Russian occupation in Ukraine, is like a “red light blinking” as his organization tries in vain to get access to the Zaporizhzhia power station for repairs.

— Amid rising tensions over gas, Moscow and Washington carried out a dramatic prisoner exchange, trading a Marine veteran jailed in Moscow for a convicted Russian drug trafficker serving a long prison sentence in the U.S.

With the help of Western arms, Ukrainian forces managed to thwart Russian forces’ attempt to storm Kyiv. Moscow now says its focus is the capture of the Donbas, Ukraine’s mostly Russian-speaking industrial heartland.

A defiant Putin vowed Russia will achieve its military goals, telling parliament, “All the tasks of the special military operation we are conducting in the Donbas and Ukraine, launched on Feb. 24, will be unconditionally fulfilled.”

Simone Tagliapietra, senior fellow at the Bruegel think tank in Brussels, said Russia’s goal in cutting off the flow of gas is to “divide and rule” — pit European countries against one another as they cast about for energy.

While Poland gets around 45% of its gas from Russia, it relies overwhelmingly on coal and said it was well prepared for the cutoff. It has ample gas in storage and will soon benefit from two pipelines coming on line, analyst Emily McClain of Rystad Energy said.

Bulgaria gets over 90% of its gas from Russia, but it could increase imports from Azerbaijan, and a pipeline connection to Greece is set to be completed later this year.

Dobrin Todorov, a resident of Bulgaria’s capital, Sofia, said the suspension is not a big problem.

“Ultimately, the choice between freedom and dignity or gas, the answer is clear, in favor of freedom and dignity,” Todorov said, adding that a lack of gas “cannot be compared to the hardship and tribulations that the Ukrainian people are currently suffering.”

Europe is not without its own leverage, since it is paying some $400 million a day to Russia for gas, money Putin would lose in a complete cutoff. Russia can, in theory, sell oil elsewhere — to India and China, for instance. But it doesn’t have the necessary pipelines in some cases, and it has only limited capacity to export gas by ship.

“The move that Russia did today is basically a move where Russia hurts itself,” von der Leyen said.