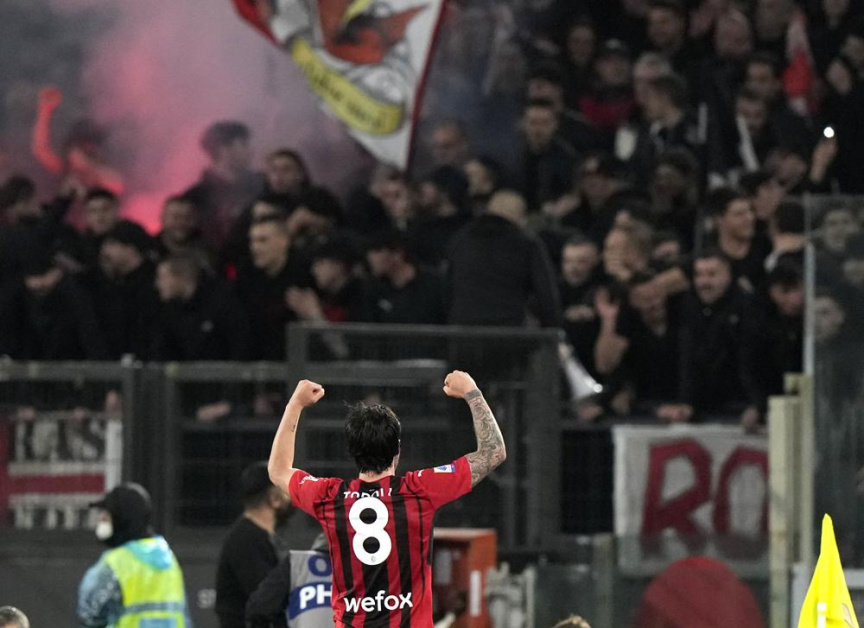 ROME (AP) — If AC Milan wins its first Serie A title in 11 years this season — and that’s looking more and more like a distinct possibility — its last-gasp comeback victory at Lazio on Sunday might go down as one of the keys to success.

Sandro Tonali scored in stoppage time as Milan came back from a goal down for a 2-1 win that restored the Rossoneri’s position atop the Italian league table.

With four matches remaining, Milan moved two points ahead of city rival Inter Milan, which has a game in hand on its rival. Milan had put the pressure on with a 3-1 win over Roma on Saturday, and can reclaim the lead if it beats Bologna on Wednesday in a rescheduled match.

After a failed clearance from Francesco Acerbi, Tonali used his thigh to control a headed pass from Zlatan Ibrahimović, then poked the ball in — setting off wild celebrations among a large crowd of visiting fans at the Stadio Olimpico. In a display of determination, the play began when Ante Rebić stripped the ball from Lazio’s possession.

“It’s only right to be happy and satisfied with this game and our fans, who once again proved themselves fantastic,” Pioli said.

Napoli’s hopes of a first Serie A title in more than three decades were virtually torn apart over an eight-minute span late in the second half at Empoli on Sunday.

Napoli conceded three straight goals — including one that was the product of a terrible error by goalkeeper Alex Meret — and squandered a two-goal advantage in a 3-2 defeat that extended its winless streak to three matches.

Third-place Napoli was left seven points behind Milan. Fourth-place Juventus can move within one point of Napoli with a win at Sassuolo on Monday.

Napoli stalwarts Dries Mertens and Lorenzo Insigne had put Napoli 2-0 up before the hour mark and the Partenopei looked confident entering the final 10 minutes.

That’s when the match turned.

Meret then took too long to clear and when he finally did try to launch the ball away from his goal, Andrea Pinamonti was right on top of him and the ball ricocheted off the Empoli striker and into Meret’s net.

Finally, in the 88th, Pinamonti finished off a swift counterattack to earn 14th-place Empoli its first win since December.

It marked only the third time in Serie A history that a team won after trailing by two goals after 79 minutes.

“Clearly imagining an end to the game like that was difficult,” Napoli coach Luciano Spalletti said. “We made a few too many mistakes and lost the ball too easily.”

Having spent most of the season in last place, Salernitana is suddenly on a three-match winning streak — its first such run in its Serie A history — and putting up a fight to avoid relegation.

The southern club beat visiting Fiorentina 2-1 to move within three points of 17th-place Cagliari, which lost 1-0 to Genoa — another club in the drop zone.

Substitute Federico Bonazzoli scored the winner in the 79th after Milan Đurić had given Salernitana an early advantage. Riccardo Saponara had equalized for Fiorentina.