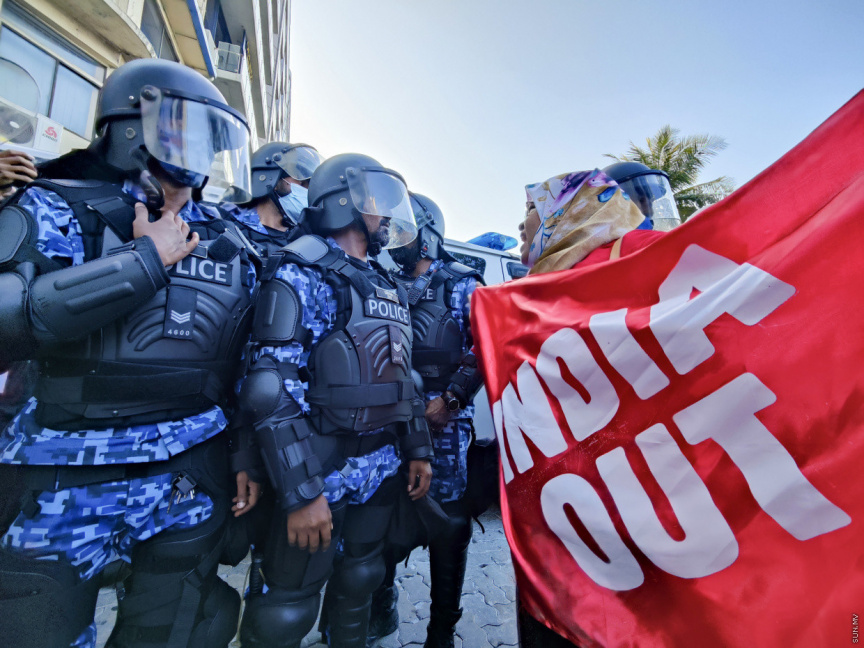 A capture from a protest held as part of the opposition coalition's 'India Out' campaign. (Sun Photo/Mohamed Hayyan)

Opposition coalition – comprised of Progressive Party of Maldives (PPM) and People’s National Congress (PNC) – has called on President Ibrahim Mohamed Solih to not obstruct efforts by Maldivian citizens to safeguard the independence and sovereignty of Maldives.

In a statement released condemning the suspension of a teacher who had criticized the presidential decree banning the ‘India Out’ campaign, and voiced out support for the campaign – the opposition coalition stressed that the president’s decree does not fall within the three circumstances stipulated in the Maldivian constitution under which presidential decrees can be issued.

The coalition, therefore, said that the decree is void. In light of this, they expressed concern over the intimidation, suspension and dismissal of individuals employed as civil servants in connection to the decree.

“The biggest threat to Maldivians at present is the undisclosed agreements being executed with India and the increased control of Indian military personnel on Maldivian soil which has subjected the country’s independence and sovereignty to risk,” they had also said.

In their statement, the opposition coalition had directly challenged the president’s decree stating that actions being taken against ‘India Out’ activities hold no legal basis.

They also called on the president to not obstruct efforts by Maldivian citizens to safeguard the country’s independence and sovereignty and called on security forces to not enforce such orders.

As part of the campaign being carried out against the presence of Indian military personnel in the Maldives, huge banners with ‘India Out’ written in bold letters were hung at former President Abdulla Yameen Abdul Gayyoom’s house, H. Dhoovehi, and PPM headquarters, located in H. Hurafa. They were both forcibly removed by Police on Thursday, after entering the buildings with court orders.

In the presidential decree titled ‘Stopping Planned Activities to Incite Hatred Towards Specific Countries Under Various Slogans’ which was gazetted today, it was stressed that the National Security Council had decided the ‘India Out’ campaign posed a threat to national security.

President Solih, in the decree, also said the ‘India Out’ campaign put Maldives at risk of loss of peace and stability, huge economic and social burden, and isolation in the international arena.

He said that failure to save Maldives from the danger could lead to irrevocable losses, and make it difficult to maintain Maldives’ independence, and ascertain the safety of Maldivians living or visiting overseas, and foreigners in Maldives.

Citing these reasons, President Solih had ordered to stop ‘India Out’ activities and instructed all government authorities to enforce this.

Opposition coalition had deemed the decree to be unlawful and has revealed plans to challenge it in court.

Opposition to challenge decree on ‘India Out’ at court