Opposition to challenge presidential decree on ‘India Out’ campaign at court 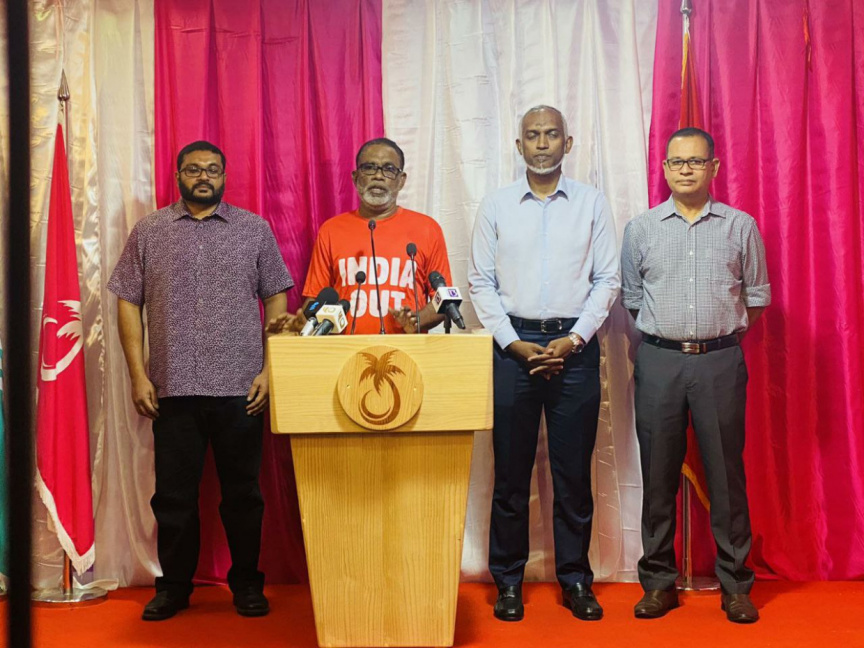 PNC’s Leader Abdul Raheem Abdulla (Adhurey) has stated that the opposition coalition will be going to court to dismiss the decree issued by President Ibrahim Mohamed Solih earlier today declaring the ‘India Out’ campaign as a threat to national security.

Speaking at a press conference held at PPM headquarters this afternoon, Adhurey said that the decree is unlawful.

He detailed that discussions were underway with the opposition’s legal team on challenging the decree at court – for which a decision shall soon be made.

“We are discussing with our legal team on challenging the decree,” he had said.

In the presidential decree titled ‘Stopping Planned Activities to Incite Hatred Towards Specific Countries Under Various Slogans’ which was gazetted today, it was stressed that the National Security Council had decided the ‘India Out’ campaign posed a threat to national security.

President Solih, in the decree, also said the ‘India Out’ campaign put Maldives at risk of loss of peace and stability, huge economic and social burden, and isolation in the international arena.

He said that failure to save Maldives from the danger could lead to irrevocable losses, and make it difficult to maintain Maldives’ independence, and ascertain the safety of Maldivians living or visiting overseas, and foreigners in Maldives.

Citing these reasons, President Solih had ordered to stop ‘India Out’ activities and instructed all government authorities to enforce this.