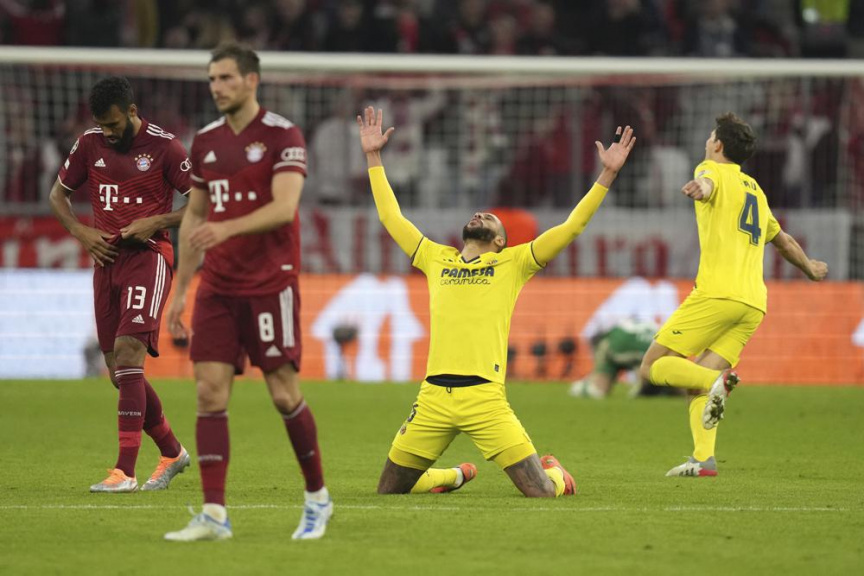 MUNICH (AP) — As the final whistle blew — and Bayern Munich’s dejected superstars slumped to the ground — Villarreal’s substitutes raced onto the field to join the teammates who ousted the six-time European champions.

There would have been room enough in Bayern’s stadium for the entire population of Villarreal to celebrate with them Tuesday after the team reached the Champions League semifinals for the first time since 2006.

Such are the disparities in size and status between these clubs, that all 50,000 residents of the southeastern Spanish city could fit into Bayern’s 75,000-capacity Allianz Arena.

“We are a small city but they are strong players,” Villarreal coach Unai Emery said after his team earned a late 1-1 draw that secured a 2-1 aggregate victory in the quarterfinals.

Villarreal had won the first leg 1-0 at home when it squandered chances for an even bigger lead, and Bayern had leveled the aggregate score when Robert Lewandowski netted seven minutes into the second half. This time it was Bayern that missed chances to score again, and Samuel Chukwueze completed a counterattack in the 88th minute to extend Villarreal surprising run in the competition.

“They made the mistake today of not killing us off and we took advantage of that,” Villarreal striker Gerard Moreno said. “What this team has done is great.”

Especially given that Villarreal only qualified for the Champions League by winning the Europa League and is seventh in the Spanish league after struggling domestically. Bayern, meanwhile, is the runaway Bundesliga leader.

And while Bayern lifted the European Cup in 2020, the furthest Villarreal has reached in the competition is the semifinals the single time in 2006.

“If you take just this game into account, without the first game, we should have gone through convincingly,” Bayern forward Thomas Müller said. “It’s difficult to accept this; I don’t know what to say.”

But the same resolve that saw Villarreal beat Manchester United on penalties in the 2021 Europa League final has now seen the team oust both Juventus and Bayern in the knockout phase of the Champions League.

There could be another six-time champion to eliminate to a reach a first Champions League final. Liverpool or Benfica awaits in the semifinals, with the English club holding a 3-1 lead over the Portuguese side heading into Wednesday’s second leg at Anfield.

Even when Lewandowski leveled the quarterfinal on aggregate — with a low shot after being set up by Müller — Villarreal continued to cause Bayern problems.

The decisive moment came when Dani Parejo gained possession by the Villarreal penalty area and then launched the breakaway by sending the ball to Giovani Lo Celso. Lo Celso then slid a pass across the face of goal and Chukwueze struck into the top corner of the net.

Villarreal was delirious and held out for the memorable win.

“We knew we were going to suffer in defense but we were going to have our chances,” Moreno said. “And, in the end, Chukwueze was able to make the most of it. We want to thank those who came here tonight and those who are in Villarreal. It’s great to be a Villarreal fan, and you have to enjoy nights like this.”