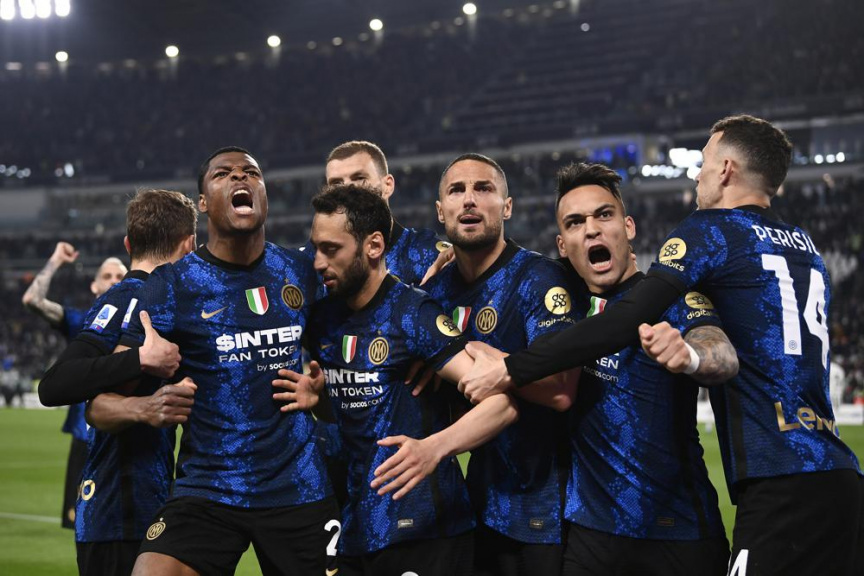 Inter's Hakan Calhanoglu, 4th from right, celebrates with teammates after scoring his side's opening goal during the Serie A soccer match between Juventus and Inter Milan, at the Allianz stadium in Turin, Italy, Sunday, April 3, 2022. (Fabio Ferrari/LaPresse via AP)

MILAN (AP) — Inter Milan halted its poor run of form in the best possible way by beating fierce rival Juventus 1-0 to boost its Serie A title chances and hinder its opponent’s own hopes on Sunday.

Hakan Çalhanoğlu converted a penalty at the second time of asking in first-half stoppage time. Defending champion Inter moved to within three points of leaders AC Milan and Napoli, which won at Atalanta 3-1 earlier.

Inter, which has played a match fewer than most of its title rivals, had won just one of its previous seven league matches.

“It’s a fundamental step because at the moment we’re chasing the others and we want to remain up there with Milan and Napoli,” Inter coach Simone Inzaghi said.

“We’ve lost points, we know that, and we want to try and get them back in the eight matches that remain.”

Juventus hit the woodwork twice and had 23 shots compared to just five for Inter in one of the Bianconeri’s best matches of the season, but it remained fourth and slipped four points below Inter.

“It was a good Juventus performance, we’re improving and I am happy,” Juventus coach Massimiliano Allegri said. “But finally we can say that Juve is definitively out of the title race.

“We have to try and get as many points as possible to hold onto fourth spot and get to the starting blocks next year ready to try to win the title.”

The Derby d’Italia is always hotly contested but this time Juventus knew it could move above Inter in what has become a thrilling title race.

Juventus was unbeaten in 16 consecutive league matches and started brightly in Turin, with three early opportunities to take the lead including Giorgio Chiellini hitting the underside of the crossbar.

However, it was Inter which broke the deadlock on the stroke of halftime after Juventus forward Álvaro Morata fouled Denzel Dumfries just inside the area. Referee Massimiliano Irrati awarded the penalty after reviewing the incident on the pitchside monitor.

Çalhanoğlu’s first attempt was saved by Wojciech Szczęsny but – after another VAR check – it was ordered to be retaken because of encroachment and the Inter forward buried his second chance into the bottom left corner.

Juventus again had the better of the chances in the second half but it was denied by wayward finishing and good saves by Inter goalkeeper Samir Handanović, who also tipped an effort from Denis Zakaria onto the post.

Lorenzo Insigne scored one and set up another to help Napoli move level with Milan at the top of the table.

Insigne, who is leaving Napoli at the end of the season after 15 years to join Toronto FC in Major League Soccer, converted a penalty and provided the assist for a Matteo Politano volley to give them a comfortable halftime lead.

Marten de Roon got Atalanta back into the match in the 58th minute but Eljif Elmas sealed the result nine minutes from time following a swift counterattack as the hosts laid siege to the Napoli goal.

Napoli is below Milan on head-to-head record.

Atalanta’s hopes of qualifying for the Champions League for a fourth straight season appear to be all but over as it was eight points behind Juventus.

José Mourinho’s Roma moved to within five points of the top four after winning at struggling Sampdoria 1-0.

Beto bagged a hat trick to help Udinese recover to beat Cagliari 5-1 in a relegation fight.