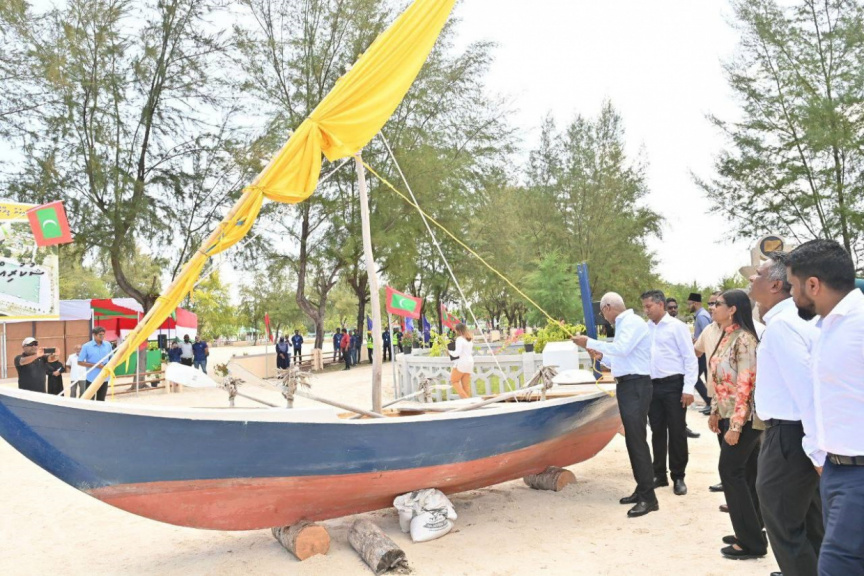 The harbor was inaugurated as part of the first couple’s recent four-day trip to Addu and Fuvahmulah City.

Meedhoo Harbor was developed by Maldives Transport and Contracting Company (MTCC). Under this project, the company deepened the harbor and its entrance and a new sand fill breakwater, a 115-meter seawall, and a 496-meter quay wall structure were constructed. Apart from this, pavements were laid and lights were installed along the harbor.

Following the inauguration of the Meedhoo Harbor, President Solih had handed the place over to Addu City Council.

He also toured the worksite of Hulhudhoo harbor development project which is also undertaken by MTCC, and inspected its progress.

Works planned under this project include deepening the entrance, installation of a 624-meter revetment, 114-meter breakwater, 742-meter quay wall and finishing the project with pavements and lights laid out along the harbor.

Earlier in the day, the first couple toured the ‘Vilunu’ Drug Detoxification and Community Rehabilitation Centre in Hulhudhoo.

The first couple concluded their four-day trip and arrived back in Male’ this afternoon. The couple was accompanied by a high-level delegation from the government during this trip.