Ecuador, Uruguay book their places for World Cup in Qatar 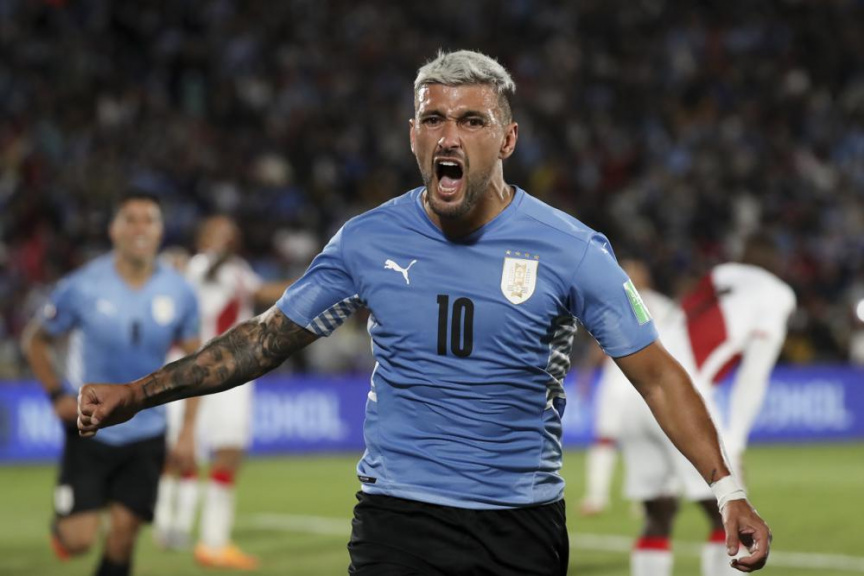 SAO PAULO (AP) — Ecuador and Uruguay have secured their spots at soccer’s World Cup in Qatar, joining Brazil and Argentina from South America.

The third-place Ecuadorians lost 3-1 at Paraguay on Thursday, but they achieved one of the four direct spots after the Uruguayans, in fourth position, beat Peru 1-0 in Montevideo, a result that also allowed them to book their flights to Qatar.

Ecuador and Uruguay reached 25 points on the table and can no longer be overtaken by other teams. Brazil and Argentina had earlier secured two of the region’s direct spots.

Uruguay’s Giorgian de Arrascaeta scored the goal that advanced both his team and Ecuador into the next World Cup in the 42nd minute from close range in a hard-fought match.

It was very different in Ciudad del Este, where Ecuador was no match for Paraguay.

Robert Morales opened the scoring in the ninth minute, Ecuadorian defender Piero Hincapié scored an own goal from long range seconds before the halftime whistle and Miguel Almirón added a third in the 54th minute.

Jordy Caicedo scored for Ecuador from the spot in the 85th minute.

The fifth position, which qualifies for an international playoff against an Asian team, is still up for grabs. Peru, with 21 points, can get it by beating Paraguay at home on Tuesday. Colombia, with 20 after its 3-0 win against Bolivia, needs to beat Venezuela and cheer against the Peruvians.

Chile, with 19 points, will have to overcome Uruguay in Santiago and hope other results go its way. La Roja will not be very confident about that result after being crushed by Brazil 4-0 at the Maracanã Stadium.

Colombia managed to stay alive with its first goals in almost 700 minutes in South American qualifiers. It beat Bolivia with goals by Luis Diaz in the 39th minute, Miguel Borja in the 72nd and Mateus Uribe shortly before the final whistle.

The remaining match of the penultimate round of South American World Cup qualifiers will be played on Friday, when Argentina takes on Venezuela in Buenos Aires.

By the end of last year, Uruguay was nearly out of the World Cup, firing its veteran coach Óscar Tabárez and struggling to see a future past Qatar.

Three matches and three wins after new coach Diego Alonso took over, an Uruguay team with a lot of fighting spirit will play its fourth consecutive World Cup. It could even finish third in South American World Cup qualifiers depending on Tuesday’s results.

The first minutes of the match in Montevideo didn’t make local fans too confident, though, with Peru’s Gianluca Lapadula nearly scoring with a header in the fifth minute.

Unlike in previous matches, Uruguay recovered control and scored in its first clear opportunity. Rodrigo Betancur passed to Darwin Núñez on the left, and he crossed to Josema Giménez. He fired on the post and De Arrascaeta just pushed it to the net.

Uruguay kept the pressure and hit the bar with Valverde in the 48th minute. But Peru did little to trouble the hosts despite its need for a win. Their best chance to equalize came in added time with a long and high shot by Miguel Trauco, which goalkeeper Rochet barely kept out of his goal.

“We have to stress all the work our maestro Tabárez made, everything that he built cut a lot of the path and we had the chance of enjoying everything he has done so we could give our best to be in a World Cup again,” Alonso said at a media conference.

Brazil coach Tite wanted to test a light offensive trio with Vinicius Jr., Neymar and Antony. The excited fans leaving the Maracanã Stadium after the match suggested the idea was well worth it.

Neymar scored from the spot in the 44th minute and two minutes later assisted Vinicius Jr. to score his first goal for the national team.

Antony nearly scored with a lob past Chile goalkeeper Claudio Bravo, but the referee awarded a penalty in the same play. Philippe Coutinho then made it 3-0 in the 72 minute.

In added time, substitute Richarlison scored his with a crossed shot.

Vinicius Jr. was emotional after his first goal for the national team.

“At the Maracanã, with my family there ... there was no better place to score my first goal for Brazil,” he said. “This is our last match in Brazil before the World Cup, I am glad that the fans are with us. Now we have to work more to get the title in the end of the year.”

Neymar and Vinicius Jr. will not play against Bolivia on Tuesday due to a third yellow card. A win by Brazil would give it 45 competition points, a record for a South American qualifying tournament. The previous mark of 43 was set by Argentina in qualifying for the 2002 World Cup.