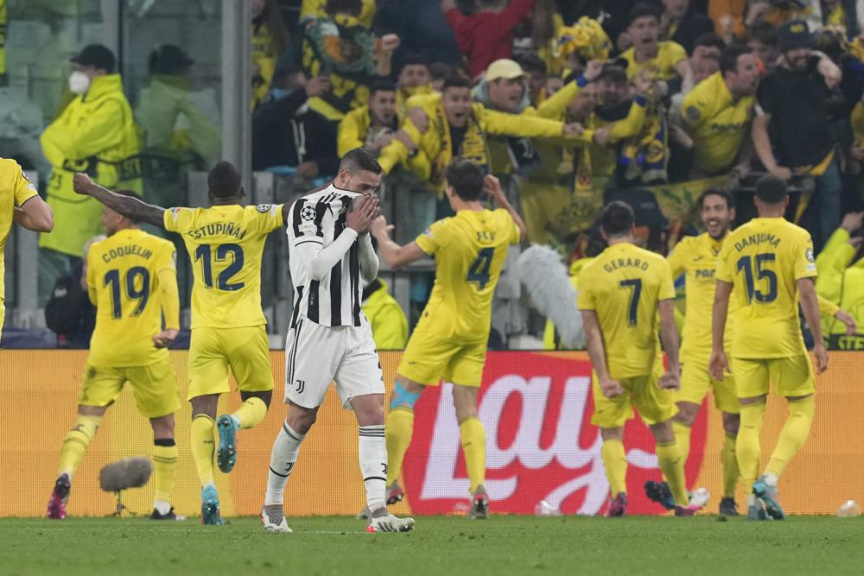 TURIN, Italy (AP) — With three different coaches in three seasons, the result remains the same for Juventus: three straight eliminations at home in the Champions League round of 16.

Europa League champion Villarreal scored three second-half goals in a 3-0 win on Wednesday to advance to the quarterfinals for the first time in 13 years.

Substitute Gerard Moreno converted a penalty in the 78th minute to break the deadlock following a 1-1 draw in the first leg. Then Pau Torres was left unmarked to redirect in a corner before Arnaut Danjuma added another spot kick as Villarreal advanced 4-1 on aggregate.

“For 75 minutes the squad did well,” Juventus coach Massimiliano Allegri said. “Then a single episode changed the match. These things happen in soccer and we have to accept this heavy loss.”

Allegri returned to Juventus this season after Maurizio Sarri and Andrea Pirlo coached the Bianconeri during defeats to Lyon and Porto at this stage over the last two seasons, respectively.

Including a quarterfinal defeat to Ajax in 2019, it’s the fourth straight time that Juventus has been knocked out after a home second-leg match.

“We have to improve in scoring goals when we are dominating games like tonight,” Juventus defender Danilo said. “We made another mistake after their first goal. We still had time to equalize and bring the game to extra time but we all went forward and they punished us.”

In Wednesday’s other match, defending champion Chelsea advanced 4-1 on aggregate after a 2-1 win at Lille.

The draw for the quarterfinals will be held Friday.

Juventus sorely missed captain Giorgio Chiellini, who never left the bench following an injury layoff, and fellow center back Leonardo Bonucci, who was still out injured.

The Bianconeri were eliminated by Lyon and Porto at Allianz Stadium the last two years under Maurizio Sarri and Andrea Pirlo, respectively. With Massimiliano Allegri having returned as coach this season, the trend was expected to be broken. But after a strong first half, Juventus was broken down midway through the second half.

The penalty was awarded after a VAR ruling determined that Juventus defender Daniele Rugani fouled Francis Coquelin. Juventus goalkeeper Wojciech Szczęsny has saved three straight penalties in Serie A and got his gloves on Moreno’s kick but couldn’t stop it.

“We’re here at Juve’s stadium, we were always going to suffer,” Villarreal goalkeeper Gerónimo Rulli said. “We defended incredibly and we have to applaud that. We’re happy to still be in the competition.”

Torres netted from close range in the 85th after a corner was flicked on. Then a handball from Matthijs de Ligt in stoppage time set up Danjuma’s spot kick.

“That’s the script. We wanted to make it a long game for them,” Torres said. “We had a number of important lads on the bench and Gerard changed the side completely when he came on because he’s a top player.”

With the away goals rule no longer in use, both teams needed to win to advance.

Juventus had several chances early on, including when Dušan Vlahović hit the crossbar with one touch following a cross from Mattia De Sciglio, and a header from Álvaro Morata. Giovani Lo Celso curled wide in Villarreal’s best chance of the first half.

At the start of the second half, it appeared that Villarreal was content to sit back and defend and try to get take the game to extra time and a shootout. But when Moreno came on, the momentum shifted.

“That’s soccer,” Juventus midfielder Juan Cuadrado said. “We had a good first half with some chances. In the second half we tried to move the ball around more to create spaces but they were placed well.”