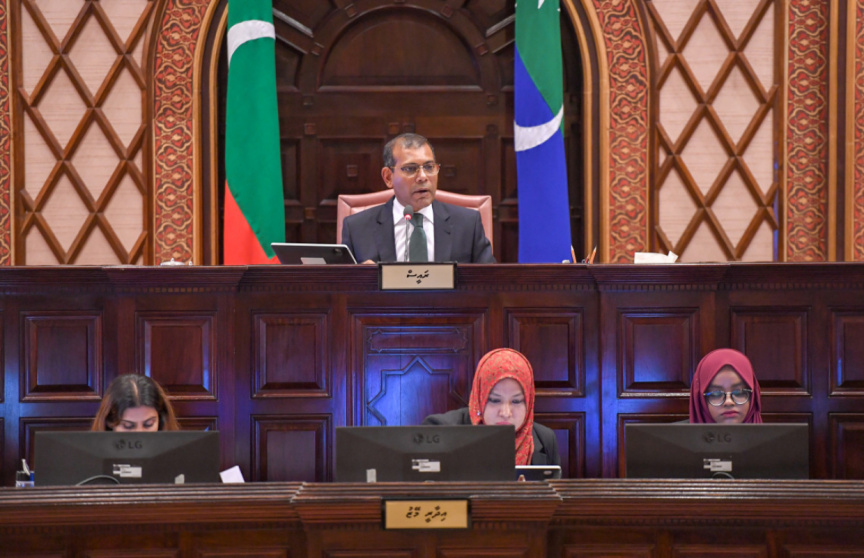 Former President and current Speaker of the Parliament Mohamed Nasheed stated that the former President Abdulla Yameen Abdul Gayoom’s claims regarding the Uthuru Thila Falhu agreement signed with India were all untrue.

Speaking at the Parliament sitting on Monday, Nasheed said that the statements made by Yameen while speaking at an ‘India Out’ gathering held in ADh. Mahibadhoo on Friday were all false and noted that he has been spreading false information regarding the contents of the agreement.

Nasheed said that although Yameen alleged that as long as the UTF agreement stands, the Indian government ‘owns’ the area and that an airbase and military base at sea will be developed, it was all false.

Additionally, he noted that Yameen’s claims that Indian military vessels need no permission from the Maldivian government to dock at UTF and the claims that Indian soldiers working to develop the region can bring in any weapons were all lies too.

“In addition to this, the claims that under UTF agreement Indian military personal were allowed to bring in any weapons are all against the truth.”

The UTF project involves developing a modern naval port and dockyard in the base. Maldivian government has stated that Maldives will have full ownership of the facilities established at the UTF base under the project and that the facilities will be operated by Maldives.

Noting that MP Adam Shareef submitted the UTF case to the Parliament in September 2021. He went on to state that the motion submitted requested to study the contents of the original agreement, and investigate if there is any ‘danger’ in it.

Nasheed said that the Parliaments National Security Committee studied the agreement following this. Both Maldives National Defence Force (MNDF) and Ministry of Defense were summoned and they gave a presentation regarding the agreement.

“In these meetings, MP Adam requested to share the original agreement with committee members. And so, it was shown on screen as well.”

He highlighted that hardcopy of the agreement was not shared as the committee believed that since it was a bilateral agreement signed between two nations, and should the contents be leaked to social media, it might cause distress to the diplomatic relations.

“Looking at the investigation done by the committee, it was stated that under the agreement, the facilities to be developed in UTF, infrastructure, intellectual property rights and equipment installed there was the sole property of the Maldivian government.”

'Dev. of Addu will result in nation-wide progress'

Nasheed asks if changes to Tourism Act can be legalized