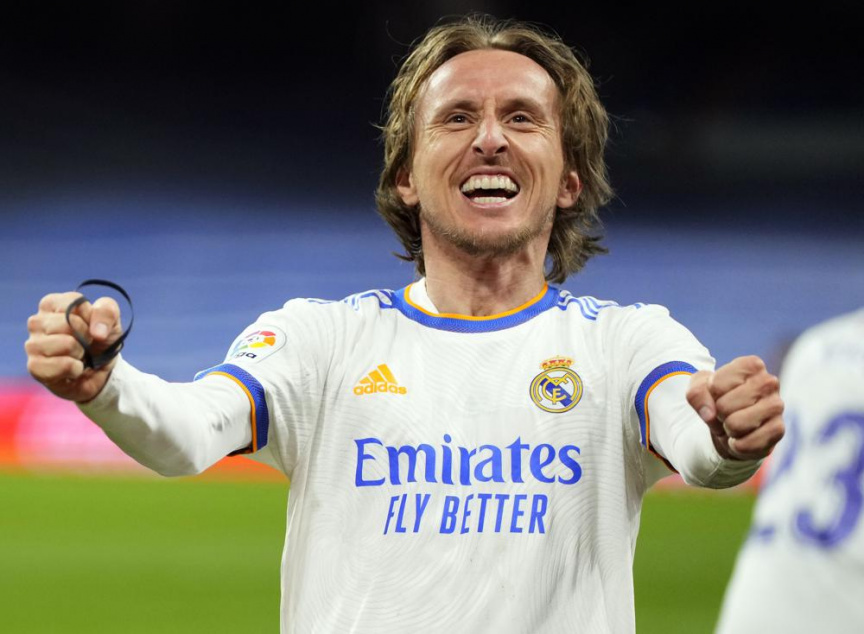 BARCELONA, Spain (AP) — Luka Modric and Eduardo Camavinga struck scorching goals from outside the area to lead Real Madrid from behind to beat Real Sociedad 4-1 and increase its lead of the Spanish league on Saturday.

After his midfielders scored just before halftime to overturn an early spot kick by Mikel Oyarzabal, Karim Benzema added a second-half penalty to put the result beyond doubt and take his league-leading goal tally to 20. Marco Asensio then finished off the demoralized visitors.

Madrid will prepare for Wednesday’s critical game against Paris Saint-Germain with the French powerhouse holding a 1-0 advantage going into the return leg of their Champions League round-of-16 tie.

The comeback over Sociedad lifted Madrid eight points clear of second-placed Sevilla, which a day before was held to a scoreless draw at Alavés.

“There is still a long way to go in the league, but these are three important points because we have to think that way, going forward game by game,” Madrid midfielder Casemiro said.

Before kickoff, both teams posed with shirts and large signs reading “Everyone for Ukraine” in Spanish to protest Russia’s invasion of its neighbor. Madrid’s backup goalkeeper Andriy Lunin, who is Ukrainian, was among the players. Fans at the Santiago Bernabéu also held up large cards with either the yellow or blue colors of the Ukrainian flag.

Sociedad struck first thanks to David Silva. A pass by Silva for Oyarzabal was deflected back to the former Manchester City midfielder in the area, where he was tripped by Dani Carvajal as he tried to dribble past the defender.

Oyarzabal converted the resulting spot kick in the ninth minute by driving a low strike just inside the right post and beyond the reach of Thibaut Courtois.

But Madrid finished the first half after a blitz of opportunities while Sociedad could barely touch the ball and was pushed into its own box.

Camavinga stunned Sociedad in the 40th when he opted to unleash a long-range strike that took a slight deflection off Asier Illaramendi before beating goalkeeper Álex Remiro. It was Camavinga’s second goal since joining Madrid in the offseason. The 19-year-old started in place of Toni Kroos, whom coach Carlo Ancelotti said he expects to be back for PSG.

Modric, who at 36 is still in top form, bettered that blast just three minutes later when he juked past Silva outside the area before curling a powerful left-footed shot into the corner of Remiro’s net.

“We know the talent this team has. In two great strikes it flipped the game around,” Oyarzabal said.

Benzema made it 3-1 in the 69th from the penalty spot after a video review adjudged that Aritz Elustondo fouled Vinícius Júnior just inside the area.

Asensio added a fourth goal from a pass by Carvajal.

Osasuna ended Villarreal’s six-game unbeaten streak after Chimy Ávila scored a second-half header to secure a 1-0 home victory. The loss stalled Villarreal’s climb up the standings to get within reach of the Champions League berths.

Gonçalo Guedes kept up his good scoring form with another goal to help Valencia beat Granada 2-0. The Portuguese winger has scored 12 times in all competitions this season. His goal from long distance on Wednesday to beat Athletic Bilbao 1-0 put Valencia into the final of the Copa del Rey where it will play Real Betis.

Espanyol got its first win of 2022 after beating Getafe 2-0 in Barcelona thanks to a goal by Leandro Cabrera and an own-goal by Getafe’s Erick Cabaco.