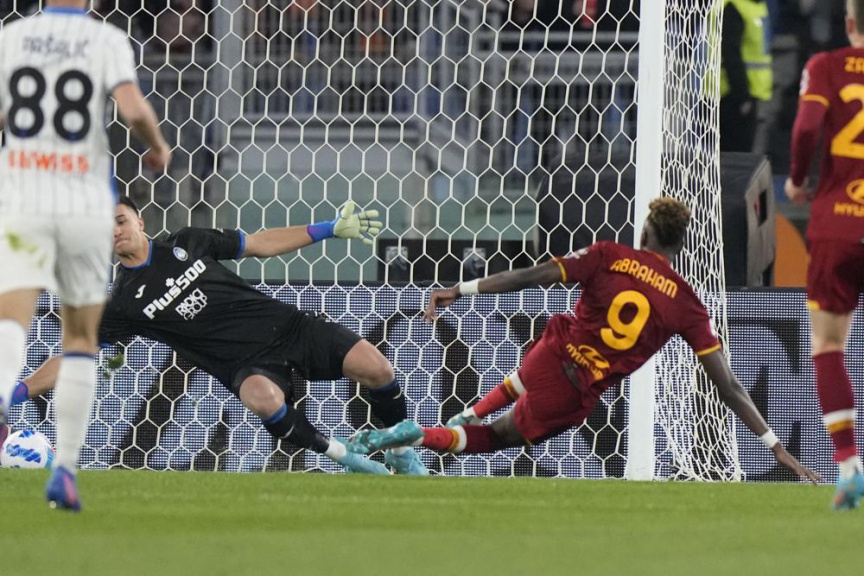 The forward whom Jose Mourinho convinced Roma to spend 40 million euros ($44 million) on in August was decisive for the second consecutive game as Roma beat Atalanta 1-0 in Serie A on Saturday in a key match for the Champions League places.

Abraham’s first-half goal was his 20th across all competitions for Roma and it followed his late strike against Spezia in another 1-0 win last weekend.

The victory extended Roma’s unbeaten streak to seven matches and drew the Giallorossi level on points with Atalanta, three points behind fourth-placed Juventus — with the top four qualifying for the Champions League.

Shortly after the half-hour mark, Rick Karsdorp intercepted an Atalanta pass then Nicolo Zaniolo set up Abraham, who darted between the two center backs to complete the counterattack.

“We’re learning more and more about each other every today,” he said. “A couple of months ago we probably would have conceded a goal in the last minute. But we fought as a team today.”

After the goal, Abraham kissed his shirt -- which he said was a tribute to a team that “lifted me up” after “a low time” in his career.

“I’ll do everything for this club,” Abraham said.

Mourinho served the second game of a two-match ban for insulting the referee.

Lazio remained one point behind Atalanta and Roma after beating relegation-threatened Cagliari 3-0 with goals from Ciro Immobile, Luis Alberto and Felipe Anderson.

A penalty from Immobile was his 143rd Serie A goal for Lazio, matching Silvio Piola’s club record. Alberto then finished off a counterattack after an exchange with Felipe Anderson, who scored himself after the hour mark by dribbling past four defenders.

Earlier, Udinese took a step toward safety with a 2-1 win over Sampdoria with goals from Gerard Deulofeu and Destiny Udogie.

Lukaku completes return to Inter on loan from Chelsea