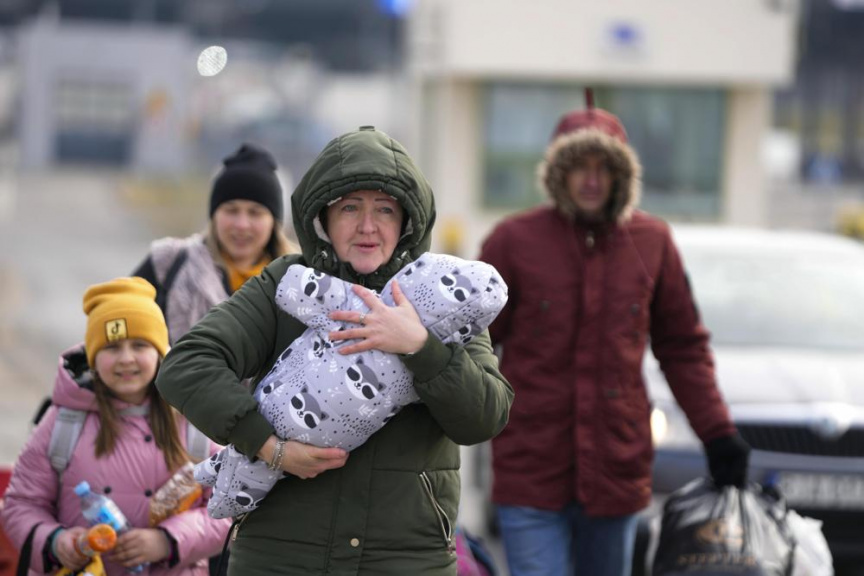 A family arrive at the border crossing in Medyka, Poland, Wednesday, March 2, 2022, after fleeing from the Ukraine. (AP Photo/Markus Schreiber)

The tally from the U.N. refugee agency released to The Associated Press amounts to more than 2% of Ukraine’s population being forced out of the country in less than a week. The mass evacuation could be seen in Kharkiv, where residents desperate to get away from falling shells and bombs crowded the city’s train station and tried to press onto trains, not always knowing where they were headed.

In a videotaped address, Ukrainian President Volodymyr Zelenskyy called on Ukrainians to keep up the resistance. He vowed that the invaders would have “not one quiet moment” and described Russian soldiers as “confused children who have been used.”

Moscow’s isolation deepened when most of the world lined up against it at the United Nations to demand it withdraw from Ukraine. And the prosecutor for the International Criminal Court opened an investigation into possible war crimes.

With fighting going on on multiple fronts across the country, Britain’s Defense Ministry said Mariupol, a large city on the Azov Sea, was encircled by Russian forces, while the status of another vital port, Kherson, a Black Sea shipbuilding city of 280,000, remained unclear.

Russian President Vladimir Putin’s forces claimed to have taken complete control of Kherson, which would make it the biggest city to fall yet in the invasion. A senior U.S. defense official disputed that.

“Our view is that Kherson is very much a contested city,” the official said, speaking on condition of anonymity.

Zelenskyy’s office told the AP that it could not comment on the situation in Kherson while the fighting was still going on.

The mayor of Kherson, Igor Kolykhaev, said Russian soldiers were in the city and came to the city administration building. He said he asked them not to shoot civilians and to allow crews to gather up the bodies from the streets.

“We don’t have any Ukrainian forces in the city, only civilians and people here who want to LIVE,” he said in a statement later posted on Facebook.

The mayor said Kherson would maintain a strict 8 p.m.-to-6 a.m. curfew and restrict traffic into the city to food and medicine deliveries. The city will also require pedestrians to walk in groups no larger than two, obey commands to stop and not to “provoke the troops.”

“The flag flying over us is Ukrainian,” he wrote. “And for it to stay that way, these demands must be observed.”

Mariupol Mayor Vadym Boychenko said the attacks there had been relentless.

“We cannot even take the wounded from the streets, from houses and apartments today, since the shelling does not stop,” he was quoted by the Interfax news agency as saying.

Russia reported its military casualties for the first time since the invasion began last week, saying nearly 500 of its troops have been killed and almost 1,600 wounded. Ukraine did not disclose its own military losses but said more than 2,000 civilians have died, a claim that could not be independently verified.

In a video address to the nation early Thursday, Zelenskyy praised his country’s resistance.

He said the fighting is taking a toll on the morale of Russian soldiers, who “go into grocery stores and try to find something to eat.”

rgiy Kyslytsya said Russian forces “have come to the Ukrainian soil, not only to kill some of us ... they have come to deprive Ukraine of the very right to exist.” He added: ”The crimes are so barbaric that it is difficult to comprehend.”

Russia ramped up its rhetoric. Foreign Minister Sergei Lavrov reminded the world about the country’s vast nuclear arsenal when he said in an interview with Al-Jazeera that “a third world war could only be nuclear.”

In the northern city of Chernihiv, two cruise missiles hit a hospital, according to the Ukrainian UNIAN news agency, which quoted the health administration chief, Serhiy Pivovar, as saying authorities were working to determine the casualty toll.

— A second round of talks aimed at ending the fighting was expected Thursday, but there appeared to be little common ground between the two sides.

— Russia found itself even more isolated economically as Airbus and Boeing said they would cut off spare parts and technical support to the country’s airlines, a major blow. Airbus and Boeing jets account for the vast majority or Russia’s passenger fleet.