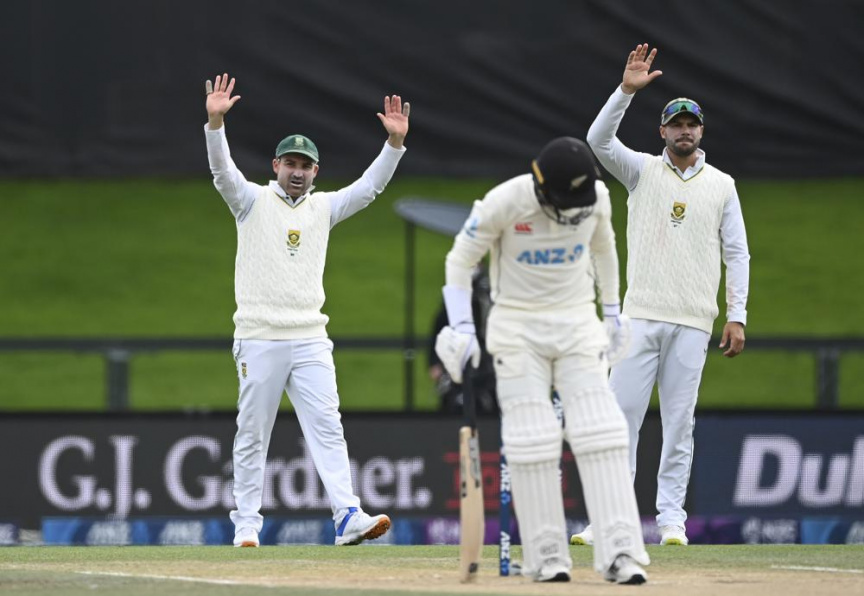 South Africa completed an extraordinary turnaround in form when it beat New Zealand by 198 runs in the second test on Tuesday to square the two-match series.

After setting New Zealand a target of 426, South Africa bowled out the home team for 227 to win with more than a session remaining at Hagley Oval in Christchurch.

New Zealand won the first test by an innings and 276 runs, bowling out South Africa for 95 and 111 at the same venue.

As if to defy that result, South Africa captain Dean Elgar made the bold decision to bat on winning the toss in the second test. Determined to atone for the first test loss, the Proteas held the upper hand for most of the next five days.

“It was a bold decision and one we had to take as a unit,” Elgar said. “Luckily it paid off. It was something which could have backfired and I would have looked like an absolute idiot.

“This is a big win in the context of playing away from home, being 1-0 down and being beaten within 2-1/2 days in the first test and then bouncing back to what we’ve done now.”

Kyle Verreyne, thrust into the role of wicketkeeper-batsman by the sudden retirement of Quinton de Kock, also posted a maiden test century to lead South Africa to a declaration at 354-9 in its second innings, a lead of 425.

Any hopes New Zealand might have had of winning the test crumbled before stumps on the fourth day when it lost its first three wickets for 25 runs. In an outstanding opening spell, Rabada removed both New Zealand openers, Tom Latham and Will Young, within the first three overs.

New Zealand resumed Day 5 at 94-4, needing to bat through all of the final day with six wickets in hand. It probably never considered an attempt to overtake the West Indies’ world-record winning fourth innings total of 418.

At first its prospects of saving the match looked good. Devon Conway, who was 60 when play began, and Tom Blundell who was 1, both appeared comfortable as the session progressed, eating up valuable time.

But Conway was out for 92 close to the end of the first session. He fell lbw to the young fast bowler Lutho Sipamla, playing across the line to a ball that was hitting leg stump.

It was a crucial blow for South Africa. Had the fifth wicket partnership, broken at 83, continued into the second session of the day, the tension of the final day would substantially have ramped up.

Instead, New Zealand went to lunch five wickets down and saw its hopes of saving the match fade away when Blundell (44) and first innings century-maker Colin de Grandhomme (18) were out within five overs of the start of the second session. That left only the bowlers to come.

Kyle Jamieson, who has some allround ability with a test half century to his credit and a batting average of 25, was 12 when he casually hoisted a ball from Marco Jansen high into the leg side where it was calmly taken by Rabada.

Tim Southee hit Rabada for four and was out two balls later in the first over after drinks, leaving South Africa one wicket from victory.

New Zealand’s last-wicket pair, Neil Wagner and Matt Henry, offered a hint of resistance. Henry made 58 and Wagner 49 in the first innings of the first test and they held out for 34 minutes.

In a last, dramatic twist, light rain began to fall at 3:17 p.m. and the umpires called for the covers and for tea to be taken early.

The final wicket fell shortly after the resumption when Henry was adjudged lbw to Keshan Maharaj, who took 3-71.

Shane Warne, one of cricket’s icons, dies at 52