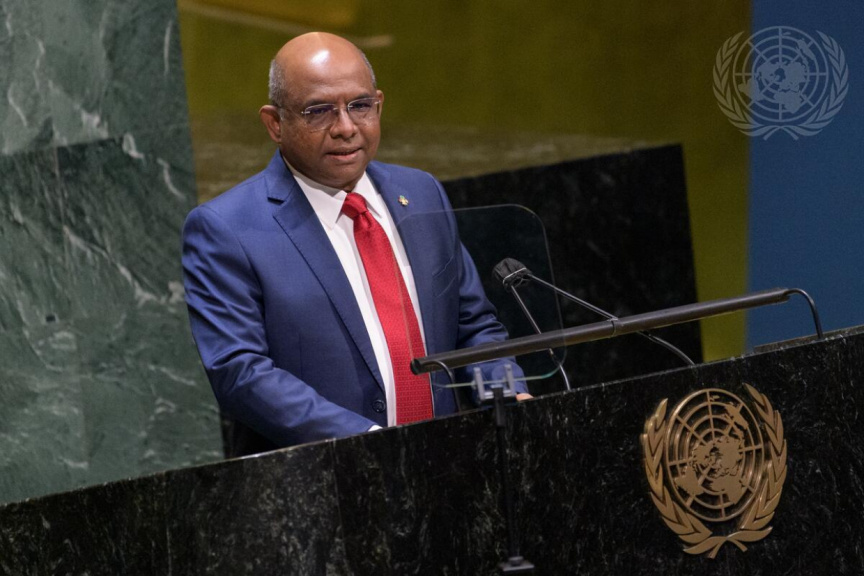 President of the 76th United Nations General Assembly (UNGA) and Maldivian Foreign Minister Abdulla Shahid has renewed his call for an immediate ceasefire, as the situation in situation in Ukraine following the invasion by Russian forces continues to deteriorate.

He made the appeal in an emergency special session on Ukraine held at the UNGA on Monday evening.

Speaking at the session, Shahid said that the UN was gravely concerned about the fast-deteriorating situation and ongoing military action in Ukraine.

“As I emphasized last week, the military offensive by the Russian Federation is a violation of the territorial integrity and sovereignty of Ukraine and is inconsistent with the Charter of the United Nations,” he said.

Shahid renewed his call for an immediate ceasefire; for all parties to exercise maximum restraint; and for a full return to diplomacy and dialogue.

“It is imperative that we act on behalf of the women, children and men caught in the crossfire. It is imperative that we pursue all available channels to contain the situation, to de-escalate tensions, and to seek peaceful resolution, in accordance with international law and the principles of the United Nations Charter,” he said.

Shahid welcomed the recent announcement by the UN Secretary-General António Guterres that USD 20 million from the Central Emergency Response Fund would be allocated to the humanitarian crisis in Ukraine.

He said that the humanitarian consequences on civilian populations, in particular women, children, the elderly and other vulnerable groups, would be devastating.

“The mass exodus of refugees including foreign nationals, numbering over half a million, from Ukraine to the eastern edge of the European Union has showed no signs of stopping. Checkpoints at the borders of Poland, Hungary, Slovakia, Romania and non-EU member Moldova have turned into choke points,” he said.

“There are no winners in war, but countless lives are torn apart. To that effect, security and access for humanitarian efforts must be guaranteed,” he said.