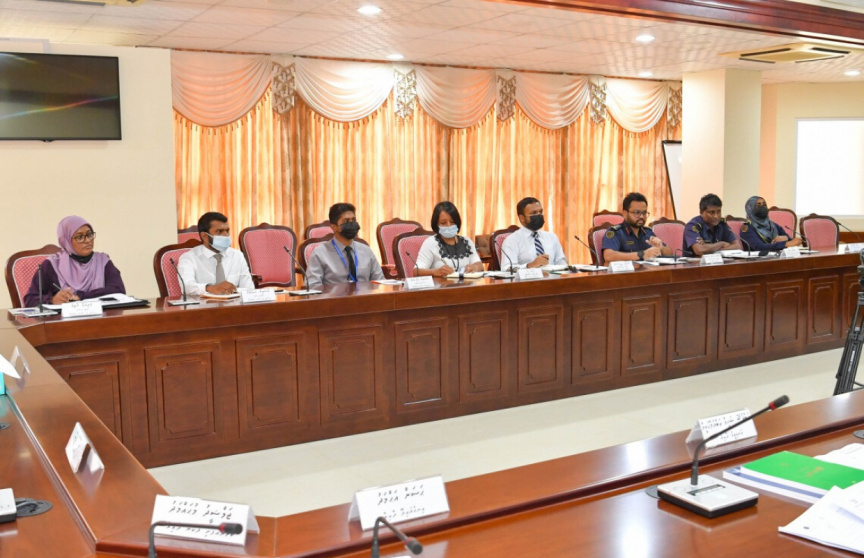 A meeting of Parliament's Committee on Foreign Relations held on February 23, 2021. (Photo/People's Majilis)

Maldives Immigration has stressed that cases of locals marrying foreigners deported from Maldives at their respective countries, and trying to bring them back to Maldives, have significantly increased.

At a convening of Parliament’s Committee on Foreign Relations regarding undocumented migrant workers, Deputy Chief Immigration Officer Mohamed Shifan said that when marriage applications of locals to foreigners are submitted, the court inquires information regarding the foreigner in question from Immigration.

“Court asks for a background check from Immigration when marriage applications of locals to foreigners are submitted. Even if we reject, because marriage is a right, the court weds them,” he had said.

“If entry to Maldives is not granted, cases are submitted to Human Rights Commission and other authorities. There are many cases like this,” he added.

Speaking at today’s Foreign Relations Committee meeting, Shifan had brought many issues to the attention of the Committee.

He said that Police had informed Immigration of the active involvement in crimes by foreigners who have been married to locals previously, in the Maldives.

In this regard, he detailed that foreigners who get their marriage visa after marrying a Maldivian, afterwards becoming involved in serious criminal offenses such as prostitution has significantly increased and become a common occurrence.

Shifan said that such marriages are opted to gain undue advantages, and not to live a proper married life.

“In such circumstances, foreigners are choosing marry Maldivian who are quite elder,” he added.

Stressing that it is not possible prove this through evidence within the criminal justice system, Shifan said that such individuals cannot be charged, therewith.

“When considering canceling the visa, because it has been a long marriage, there are children. So when deporting a mother or a father, such issues arise,” he had said.

“On rare occasions, we have deported under such circumstances as well. Nevertheless, this effectively breaks up a family. So, it is a very difficult decision to make,” he added.

Noting that there will be no one to look after the expenses of the child if an individual with a child is – Shifan said that such children usually end up in state care.

Speaking further, Shifan said that Police have flagged 18 such foreigners involved in different criminal activities – for which the Immigration is cooperating with the Police in investigating.

“For example selling dollars in the black market. In cases such as this, we have conducted ‘targeted operations’ with the police and deported about 11 people within the past two months,” he detailed.

“In addition to this, a lot of foreigners involved in prostitution. Within the past year, we have deported about 46 foreigners,” he had also said.

Shifan added that as such cases have become so common, joint operations are collaboratively carried out with different intelligence departments of the Police on almost a weekly basis.