France and EU to withdraw troops from Mali, remain in region 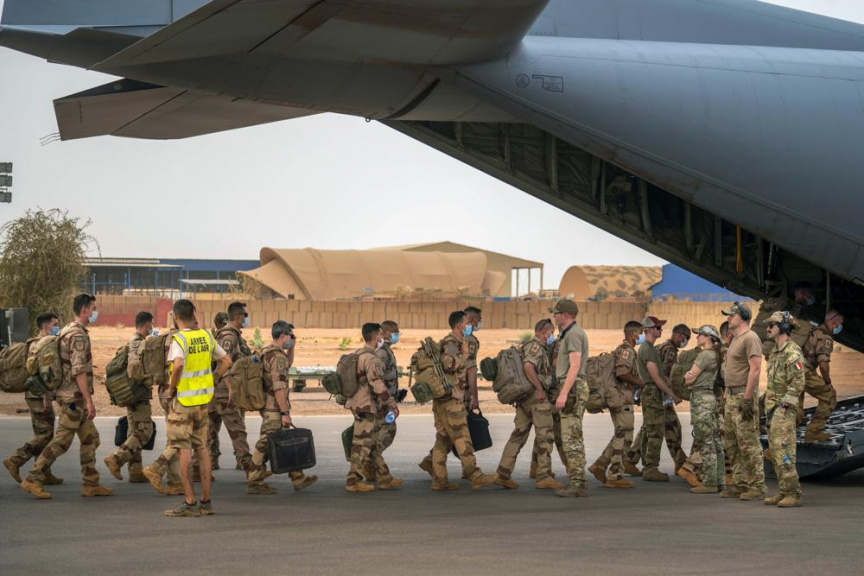 FILE - French Barkhane force soldiers who wrapped up a four-month tour of duty in the Sahel board a US Air Force C130 transport plane, leave their base in Gao, Mali Wednesday June 9, 2021. (AP Photo/Jerome Delay, File)

PARIS (AP) — France announced Thursday that it will no longer have troops in Mali by the summer amid tensions with the country’s ruling military junta, although Paris intends to maintain a military presence in neighboring West African nations.

President Emmanuel Macron accused Mali’s authorities of neglecting the fight against Islamic extremists and said it was logical for France to withdraw.

“Victory against terror is not possible if it’s not supported by the state itself,” the French leader told a press conference with European Union and African Union officials.

Tensions have grown between Mali, its African neighbors and the EU, especially after the West African country’s transitional government allowed Russian mercenaries from the Wagner Group to deploy on its territory. Senior U.S. officials said Thursday that up to 1,000 mercenaries from the group have recently moved into Mali.

France has about 4,300 troops in the Sahel region, including 2,400 in Mali. The so-called Barkhane force is also involved in Chad, Niger, Burkina Faso and Mauritania.

The “complex” withdrawal operation will take up to six months, Col. Ianni told the Associated Press, warning that it will take place “in a deteriorated security context.”

Extremist groups “will likely try to harass us, to attack us ... So we will need to keep fighting” to be able to move away men and equipment on the ground and in the air, he said.

French forces have been active since 2013 in Mali, where they intervened to drive Islamic extremists from power. But the insurgents regrouped in the desert and began attacking the Malian army and its allies.

“We got some results in Mali, but the work has not been achieved,” Col. Ianni added. “It’s not the Malian junta who kicks us out. We decided to leave because ... we cannot work in such conditions.”

Malian politicians and international experts worry the French pull-out will result in a security vacuum that will embolden jihadi groups to increase their power.

But Malian army spokesman Col. Major Souleymane Dembélé said that despite the presence of French and European forces in Mali, the country continues to be plagued by jihadists who have encroached in many areas.

“What have they given us?” he asked during a press conference. “Mali is not alone and will not remain alone. France and European countries can leave. ... Let’s give it time and you will see what will happen.”

An August 2020 coup led by Col. Assimi Goita grabbed power in Mali. Goita carried out a second coup by dismissing the civilian leaders in Mali’s transitional government and putting himself in charge last year.

European leaders simultaneously announced Thursday that troops from a EU-led military task force known as Takuba also would withdraw from Mali. The Takuba force is composed of several hundred special forces troops from about a dozen countries, including France.

Thursday’s announcements were made after involved leaders gathered in Paris ahead of a two-day EU-Africa summit in Brussels. Representatives from Mali and Burkina Faso were not invited since both nations were suspended from the African Union following coups.

“They will withdraw from Mali, but we are not abandoning Mali,” Josep Borrell, the EU’s top diplomat, said in Brussels. “We are not abandoning Sahel. We are just restructuring our presence. We will continue supporting the people in Sahel and Malian people.”

Macron criticized the Malian junta for its decision to hire the Wagner Group, which the EU accuses of fomenting violence and committing human rights abuses in Africa.

“They have now come to Mali to act in a very predatory manner,” he said. He asserted there are some 800 Wagner mercenaries present in the country.

Senior U.S. officials on Thursday said between 800-1,000 mercenaries from the Wagner group have moved into Mali in recent weeks and months. They said the number is growing and they expect it to continue to increase as the French troops leave. Overall on the continent the officials said there are between 3,000-5,000 of the Russian mercenaries.

The officials, who spoke on condition of anonymity to discuss intelligence matters, said that so far the Wagner Group’s primary mission is limited to internal Mali security, but they said they are watching it carefully and are concerned that they will move into counterterror operations.

The officials said the U.S. will continue to provide support to the French. That support has largely been intelligence, surveillance and logistics.

Macron said a coalition of allies will remain in the Sahel and the Guinea Gulf to counter actions from Al-Qaeda and the Islamic State.

The “heart” of the French operation will be moved to Niger, especially in the region bordering Burkina Faso, he said.

Col. Ianni said the new military strategy in the region, in place since last year, consists in helping local forces to “lead the fight” with French and European backing.

“The solution is in the hands of local forces, not foreign forces,” he said. “The longer a foreign force stays in a country, the more it is seen as an occupying force, helpless and criticized by the population.”

German Defense Minister Christine Lambrecht said she was “skeptical” that Germany could continue to take part in the training of Malian armed forces, raising doubts about the EU mission’s future.

Senegalese President Macky Sall, who also chairs the African Union, said he understood the decisions by France and the EU but was pleased that an agreement on a new arrangement was reached to provide a continued presence in the Sahel.

Sall said there was a consensus that the fight against terror “should not be the sole business of African countries.”

Anti-poverty organization Oxfam criticized the planned withdrawal as a “terrible admission of failure.” The group said more than 2.1 million of people have left the country because of violence, and another 13 million were in need of humanitarian assistance.

With the relocation to Niger and the reorganization of the military set up in the region, France and its allies hope to avoid a situation similar to the chaotic aftermath of the U.S. troop withdrawal from Afghanistan last year. The issue is important for Macron, who is expected to run for a second term in France’s April 10 presidential election.