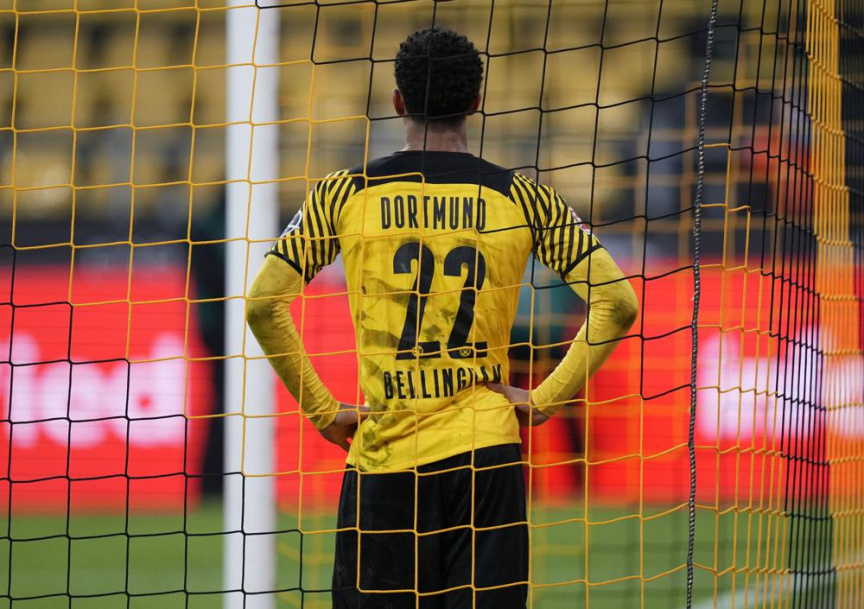 BERLIN (AP) — The injured Erling Haaland watched as his Borussia Dortmund teammates were outclassed and outgunned in a humiliating 5-2 loss at home to Bayer Leverkusen in the Bundesliga on Sunday.

Haaland, who hasn’t played since Jan. 22 due to what the club says are muscular problems, was among 10,000 spectators permitted under new nationwide coronavirus restrictions. Germany coach Hansi Flick was another.

Haaland, Dortmund’s top goal-scorer with 16 goals in 14 Bundesliga appearances this season, has been the subject of intense transfer speculation. His team’s latest performance will have done little to encourage him to stay as the defeat allowed Bayern Munich to pull nine points clear of Dortmund at the top of the table.

Gio Reyna made his comeback after a five-month injury layoff for Dortmund, but the American came on when the team was already four goals down and was foiled by a good save from Leverkusen’s Lennart Grill in the 80th minute.

Grill was only playing due to Leverkusen captain Lukáš Hrádecký’s COVID-19 infection and Andrey Lunyov’s injury. The No. 3 goalkeeper also denied Jude Bellingham late on as Leverkusen allowed Dortmund dominate possession to see out the result.

“A catastrophic day for us,” Dortmund captain Marco Reus said.

There were no clear openings for either team until Dortmund defender Dan-Axel Zagadou invited trouble in the 10th minute. Florian Wirtz pressured Zagadou into playing the ball to Leverkusen’s top scorer Patrik Schick, whose shot was saved by Gregor Kobel, only to rebound back in off the retreating Manuel Akanji.

Wirtz replied on a brilliant counterattack for Leverkusen four minutes later. Mitchel Bakker played the ball forward for Moussa Diaby, who passed it to Schick with his heel. Schick and Karim Bellarabi burst forward. Bellarabi played it at just the right time for the 18-year-old Wirtz to score.

Leverkusen maintained its pressure and Robert Andrich made it 3-1 in the 28th with a perfectly placed free kick inside the top left corner.

Jonathan Tah made it 4-1 in the 53rd with the next spectacular goal, firing a volley in under the bar after Dortmund failed to clear a corner.

Rose brought Reyna on for the ineffective Thorgan Hazard in the 63rd. The American missed 25 games across all competitions after getting hurt playing for the United States on Sept. 2.

The visitors were happy to cede possession and Grill denied Reyna and Bellingham before Diaby wrapped up the rout on another counterattack in the 87th.

Dortmund substitute Steffen Tigges capitalized on a rare lapse by Leverkusen to score in injury time, but it didn’t prevent boos and whistles from the home team’s fans.

Wolfsburg ended its 11-game winless streak across all competitions with a 4-1 victory over last-place Greuther Fürth.

Max Kruse, in his first game for Wolfsburg since switching from Union Berlin, helped the home team to its first win since its 1-0 victory over Augsburg on Nov. 6.