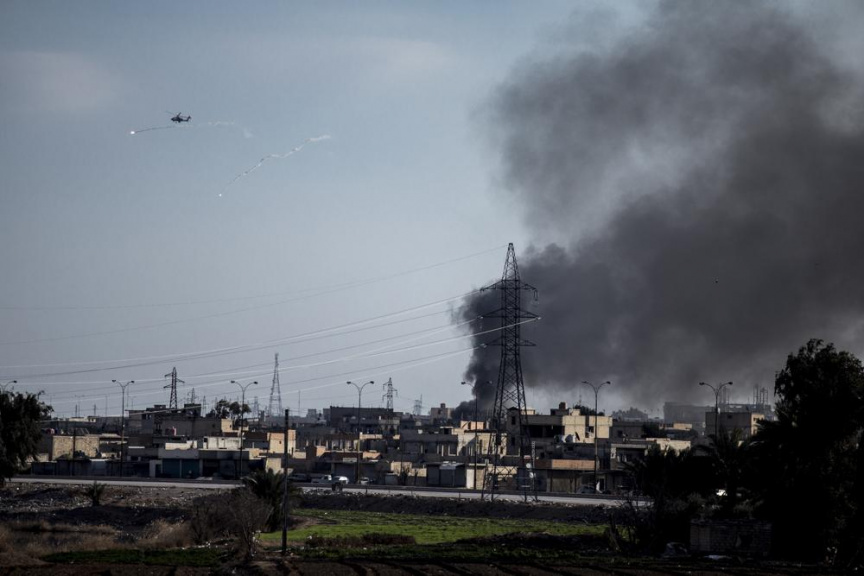 BEIRUT (AP) — With a spectacular jail break in Syria and a deadly attack on an army barracks in Iraq, the Islamic State group was back in the headlines the past week, a reminder of a war that formally ended three years ago but continues to be fought mostly away from view.

The attacks were some of the boldest since the extremist group lost its last sliver of territory in 2019 with the help of a U.S.-led international coalition, following a years-long war that left much of Iraq and Syria in ruins.

Residents in both countries say the recent high-profile IS operations only confirmed what they’ve known and feared for months: Economic collapse, lack of governance and growing ethnic tensions in the impoverished region are reversing counter-IS gains, allowing the group to threaten parts of its former so-called caliphate once again.

One Syrian man said that over the past few years, militants repeatedly carried out attacks in his town of Shuheil, a former IS stronghold in eastern Syria’s Deir el-Zour province. They hit members of the Kurdish-led security force or the local administration — then vanished.

They are “everywhere,” he said, striking quickly and mostly in the dark, creating the aura of a stealth omnipresent force. He spoke on condition of anonymity out of fear for his safety.

IS lost its last patch of territory near Baghouz in eastern Syria in March 2019. Since that time, it largely went underground and waged a low-level insurgency, including roadside bombings, assassinations and hit-and-run attacks mostly targeting security forces. In eastern Syria, the militants carried out some 342 operations over the last year, many of them attacks on Kurdish-led forces, according to the Britain-based Syrian Observatory for Human Rights.

The Jan. 20 prison break in Syria’s Hassakeh region was its most sophisticated operation yet.

The militants stormed the prison aiming to break out thousands of comrades, some of whom simultaneously rioted inside. The attackers allowed some inmates to escape, took hostages, including child detainees, and battled the Kurdish-led Syrian Democratic Forces for a week. It was not clear how many militants managed to escape, and some remain holed up in the prison.

The fighting killed dozens and drew in the U.S.-led coalition, which carried out airstrikes and deployed American personnel in Bradley Fighting Vehicles to the scene. The battle also drove thousands of neighboring civilians from their homes.

It harkened back to a series of jail breaks that fueled IS’s surge more than eight years ago, when they overwhelmed territory in Iraq and Syria.

Hours after the prison attack began, IS gunmen in Iraq broke into a barracks in mountains north of Baghdad, killed a guard and shot dead 11 soldiers as they slept. It was part of a recent uptick in attacks that have stoked fears the group is also gaining momentum in Iraq.

An Iraqi intelligence source said IS does not have the same sources of financing as in the past and is incapable of holding ground. “They are working as a very decentralized organization,” said the official, who spoke on condition of anonymity to discuss security information.

The group’s biggest operations are conducted by 7-10 militants, said Iraqi military spokesman Maj. Gen. Yehia Rasool. He said he believes it is currently impossible for IS to take over a village, let alone a city. In the summer of 2014, Iraqi forces collapsed and retreated when the militants overran vast swathes of northern Iraq.

On its online channel, Aamaq, IS has been putting out videos from the prison attack and glorifying its other operations in an intensified propaganda campaign. The aim is to recruit new members and “reactivate quasi-dormant networks throughout the region,” according to an analysis by the Soufan Group security consultancy.

On both sides of the Syria-Iraq border, IS benefits from ethnic and sectarian resentments and from deteriorating economies. In Iraq, the rivalry between the Baghdad-based central government and the autonomous Kurdish region in the north of the country has opened up cracks through which IS has crept back. Sunni Arab disenchantment with Shiite politicians helps the group attract young men.

In Afghanistan, IS militants have stepped up attacks on the country’s new rulers, the Taliban, as well as religious and ethnic minorities.

In eastern Syria, the tensions are between the Kurdish-led administration and Arab population. IS feeds off Arab discontent with the Kurds’ domination of power and employment at a time when Syria’s currency is collapsing.

Kurdish authorities have carried out crackdowns against the Arab population on suspicion of IS sympathies, especially after a wave of protests against living conditions. At the same time, to reduce tensions, Kurdish authorities released detained Arabs and encouraged members of Arab tribes to join the ranks of the SDF. But those steps have raised concerns over infiltration or charges of corruption, adding to the challenges.

The militants have cells extending from Baghouz in the east to rural Manbij in Aleppo province to the west, according to Rami Abdurrahman, the head of the Syrian Observatory.

“They are trying to reaffirm their presence,” he said.

East Syria is also fractured among several competing forces. The Kurdish-led administration runs most of the territory east of the Euphrates, supported by hundreds of U.S. troops. The Syrian government, with its Russian and Iranian allies, is west of the river. Turkey and its allied Syria fighters, who view the Kurds as existential enemies, hold a belt along the countries’ border.

Dareen Khalifa, a senior Syria analyst for the International Crisis Group, said the SDF’s dependence on an “unpredictable U.S. presence” in fighting the militants is one of its biggest challenges.

She said the SDF is viewed as a lame duck that makes local residents reluctant to cooperate with anti-IS raids or provide intelligence on IS cells, particularly after the group threatened or killed many suspected collaborators in the past.

Moreover, the Kurdish authorities’ claim to be able to govern and provide services to the region and its mixed population “has taken a blow in 2021 as the economic conditions in the area deteriorated,” Khalifa said.

Residents say the Islamic State group is not collecting taxes or actively recruiting people, indicating they are not seeking to seize and control territory like they did in 2014, when they became de-facto rulers of an area that stretched across nearly a third of both Syria and Iraq. Instead, they exploit the security vacuum and lack of governance and resort to intimidation and kidnappings.

The resident of Shuheil in Deir el-Zour said they mostly operate at night, in flash attacks on military posts or targeted killings carried out from speeding motorcycles.

He described the area as constantly on edge, under an invisible threat from militants who blend into the population. The fear is so great, no one talks openly about them, whether good or bad, he said.

“Everyone is afraid of assassinations,” he said. “They have prestige, they have a reputation. They will never go away.”