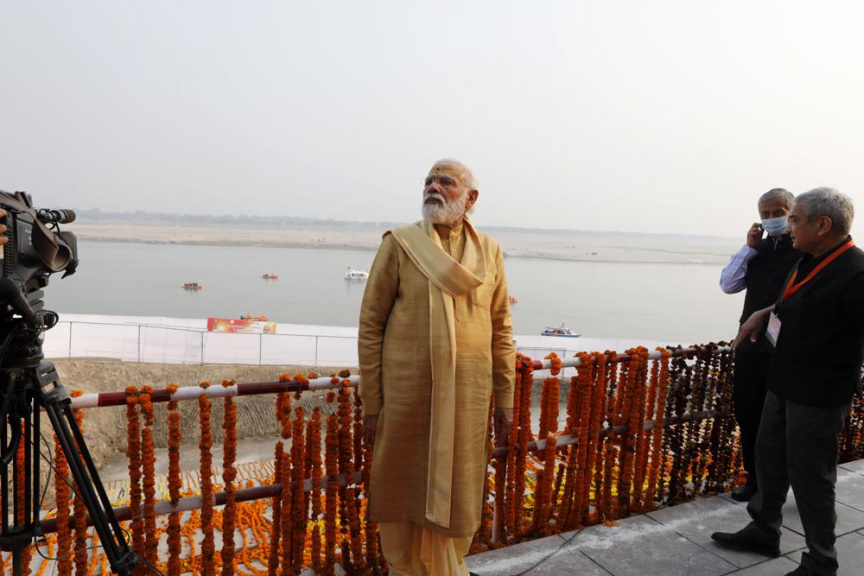 The following is an op-ed written by Manish Chand.

As India celebrates 75 years of independence and the Modi government completes eight years at the helm, the world is looking at the country of 1.4 billion anew as an emblem of hope, resilience and resurgence. Transformational diplomacy – pragmatic and visionary at the same time – has played a pivotal role in India’s ongoing global ascent, opening new avenues for prosperity and well-being of its citizens.

With the overarching strategic objective of making India a great power and its people prosperous, Prime Minister Narendra Modi has led India’s diplomatic outreach from the front. Shedding years of risk-aversion, under his watch, Indian diplomacy has become innovative, courageous, and nimble-footed, enabling India to navigate its own emergence on its own terms. This out-of-the-box approach was evident from Day 1 when Prime Minister Narendra Modi, armed with the largest mandate in a quarter century, took charge of the country on May 26, 2014. Showcasing its Neighborhood First diplomacy, the leaders of all neighboring countries and Mauritius were invited to the swearing-in ceremony of the Prime Minister. The primacy on neighborhood was also exemplified by the choice of Bhutan as the first overseas destination of PM Modi. Over the next few years, PM Modi has visited all SAARC countries sans Pakistan.

The last eight years saw an unprecedented diplomatic outreach with a record number of high-level incoming and outgoing visits. Reaching out to countries big and small – on the side-lines of the UNGA, PM Modi met the leaders of big countries as well as island nations such as St Vincent and Grenadines. Several countries saw the first-ever high-level visits from India at the level of Heads of State/Heads of Government. In sync with its rising global profile, India hosted the first-ever summit of the International Solar Alliance, the first summit with the leaders of Pacific Island states and the largest ever gathering of African leaders on the Indian soil.

The focused and systematic upgrade and transformation of India’s relations with the Gulf countries is widely seen as among major foreign policy achievements of the Modi government. PM Modi has deftly steered diplomatic outreach to the energy-rich region, forging robust security and counter-terror cooperation with key players in the region, including Saudi Arabia and the UAE.

Another major achievement of the NDA government was the upgrade of Look East to Act East policy, which signified accelerated result-driven engagement with the strategically located region. The India-ASEAN commemorative summit in 2018 was a milestone that brought the leaders of all ASEAN countries to India for the first time as chief guests at the Republic Day celebrations.

Undistracted by power games, India fused diplomacy with national development and resurgence, leading to foreign collaborations and financial support for flagship schemes of national renaissance, including Make in India, Skill India, Smart Cities, Digital India, Namami Gange and Start-up India. Enhanced engagement with India’s external partners has brought visible benefits to people through foreign investment and technology tie-ups, leading to the setting up of factories and creation of jobs. Forging of green energy partnerships with countries like the US, France and Denmark has set the stage for clean low-carbon life for citizens of India.

The recalibration of India’s foreign policy in tune with the emerging world order has led to an increasing recognition of India’s indispensability to addressing diverse cross-cutting challenges, ranging from combating terrorism, global warming, piracy and pandemics to reshaping of global governance architecture. Instead of being reactive, India proactively set the global agenda and played a constructive role in key multilateral platforms such as the UN, the G20 and the COP 26. The country’s rising global stature is clearly reflected in its ongoing tenure as a non-permanent member of the UNSC on January 1, 2021. India’s presidency of UNSC for the month of August 2021 was marked by pioneering initiatives and its focus on effective multilateralism. Under New Delhi’s presidency, a strong resolution was adopted on the situation in Afghanistan, which demanded that the Afghan territory not be used to threaten any country or shelter terrorists. The highlight of the month-long presidency was a high-level signature event on maritime security presided over by Prime Minister Narendra Modi, the first time the Prime Minister of India chaired the Security Council. The finesse with which India has steered global issues during its UNSC tenure has buttressed its credentials for acquiring a permanent seat in UN Security Council. On terrorism, India pursued the policy of zero tolerance and forged counter-terror coalitions. National security issues moved center-stage to India’s diplomatic outreach.

In view of emerging geopolitical equations, India has minted its unique brand of multi-alignment to grapple with an increasingly multipolar world which underlines the country’s growing confidence in harnessing ties with mutually antagonistic power centers without getting sucked into zero sum games.

This approach was crystallized in PM Modi’s vision of a free, open and inclusive Indo-Pacific at the Shangri La Dialogue in June 2018. In his speech, PM Modi underlined the centrality of ASEAN to the new Indo-Pacific and rejected any attempt to portray the Indo-Pacific Region as a club of limited members. In sync with this vision, New Delhi played a constructive role in bolstering the Quad grouping comprising India, US, Japan and Australia and in shaping outcomes of the two Quad summits held so far. In yet another sign of nimble-footed diplomacy, New Delhi has joined a new Quad comprising India, Israel, UAE and US, which is focused on enhancing economic cooperation in West Asia.

There are many other achievements in the realm of foreign policy the NDA government can take justifiable pride in. India has been admitted as a member of top global atomic export regimes, including Missile Technology Control Regime (MTCR), the Wassenaar Agreement and the Australia Group. Signaling India’s rising regional profile, India was admitted as a full member of the Shanghai Cooperation Organization at the SCO summit in Astana in June 2017. Now, in a unique move, PM Modi will be holding a digital summit with the leaders of the five Central Asian countries on January 27, which could prove to have a force multiplier effect on India’s relations with the resource-rich region.

A Bouquet of Hope

Looking ahead, many more milestones await India in an emerging world order. As the world grapples with the third wave of the coronavirus pandemic and its new variants, India has exhibited unique strength and resilience as it has not only vaccinated nearly a billion Indians, but has also provided vaccines and other medical support to over 100 countries around the world under the “Vaccine Maitri” initiative. In his recent address at the World Economic Forum in Davos, PM Modi underlined India’s unique strengths as an emerging country of great potential and provider of global public goods. “A strong democracy like India has gifted the whole world a beautiful gift, a bouquet of hope. In this bouquet, we Indians have an unwavering trust on democracy; this bouquet has the technology that will empower the 21st century; and it also has temperament and the talent of us Indians. The multi-lingual, multi-cultural environment in which we Indians live is a great power not only of India but of the whole world.” The world will be watching closely how this bouquet of hope provides new energy to a conflicted world.