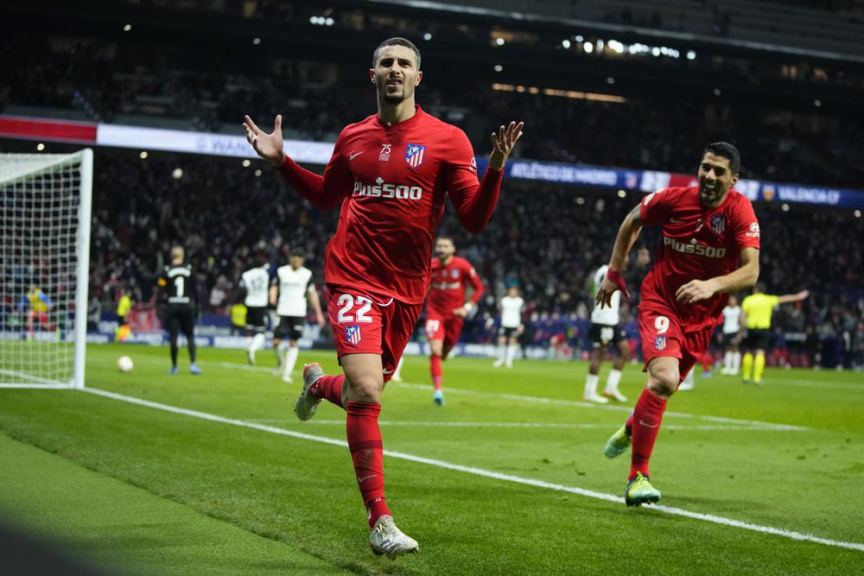 MADRID (AP) — Diego Simeone sprinted toward the stands and celebrated with Atlético Madrid fans, then jogged back to the bench and dropped his hands to his knees, breathing a big sigh of relief.

Atlético had pulled off a dramatic comeback, and just like that a ton of pressure was lifted from Simeone’s shoulders.

With a couple of goals two minutes apart in stoppage time, Atlético rallied from a two-goal deficit to end its poor run with a 3-2 win over Valencia in the Spanish league on Saturday.

The thrilling victory ended a three-match winless streak that included elimination from the Copa del Rey and the Spanish Super Cup — and had increased pressure on Simeone. It was only Atlético’s second win in its last seven league games.

“There are days that will stay with you, and this is one of them,” Simeone said. “We went for the win with all we had. The fans were behind us and the team responded.”

The result gives a much-needed boost to the team — and coach — and leaves the defending champions within four points of third-place Real Betis with a game in hand. Atlético remains far from the top, though, as leader Real Madrid is 13 points ahead.

Valencia opened a two-goal lead in the first half, but Atlético cut the gap with a goal by Matheus Cunha shortly after the break before Ángel Correa and Mario Hermoso scored two minutes apart early in injury time. Hermoso’s winner came with the player just barely onside after a shot by Cunha.

“It was a crazy one from the start,” Correa said. “We are happy we found a way to come back against such a complicated rival.”

American midfielder Yunus Musah gave Valencia the early lead in a breakaway in the 20th for his first league goal since 2020. His other two goals this season had come in the Copa del Rey.

“I’m happy for my goal but it’s a shame to lose like this,” the 19-year-old Musah said.

Simeone’s team was coming off consecutive losses to Athletic Bilbao in the Spanish Super Cup semifinals and to Real Sociedad in the round of 16 of the Copa del Rey.

The crowd at the Wanda Metropolitano Stadium supported Simeone by chanting his name early in the game, but there were some jeers when he replaced forward João Félix with defender Felipe early in the second half.

Barcelona, 17 points off the lead in seventh place, plays at relegation-threatened Alavés on Sunday.

Second-place Sevilla missed yet another chance to move close to Madrid after being held by Celta Vigo to a 2-2 draw at home.

Sevilla came from behind with two second-half goals to salvage a point, its second consecutive draw after it failed to get past Valencia in the previous round.

Julen Lopetegui’s team could have moved within a point of Madrid, which faces Elche on Sunday at the Santiago Bernabéu Stadium.

“The feeling is that if we have five more minutes maybe we could have earned the victory,” Sevilla midfielder Papu Gómez said. “The team showed character and personality. We were close to the victory.”

The setbacks have allowed third-place Real Betis to close its own gap on city rival Sevilla to six points. Betis won 4-1 at Espanyol on Friday.

Celta, which was looking for its second win in a row, sits in 11th place. It had won three of its last four games.

“We had the victory in our hands,” Franco Cervi said. “We came away with only one point when we had the three secured.”

The visitors took a 2-0 lead with goals by Cervi in the 37th minute and Iago Aspas in the 40th. Sevilla equalized with Gómez scoring in the 71st and Óliver Torres in the 74th.

The hosts came close to the win when Torres’ attempt from close range hit the post in the 81st.

Cádiz won 2-0 at last-place Levante to end a seven-match winless streak and move closer to escaping the relegation zone.

Villarreal beat Mallorca 3-0 at home as it chases a European qualification spot.