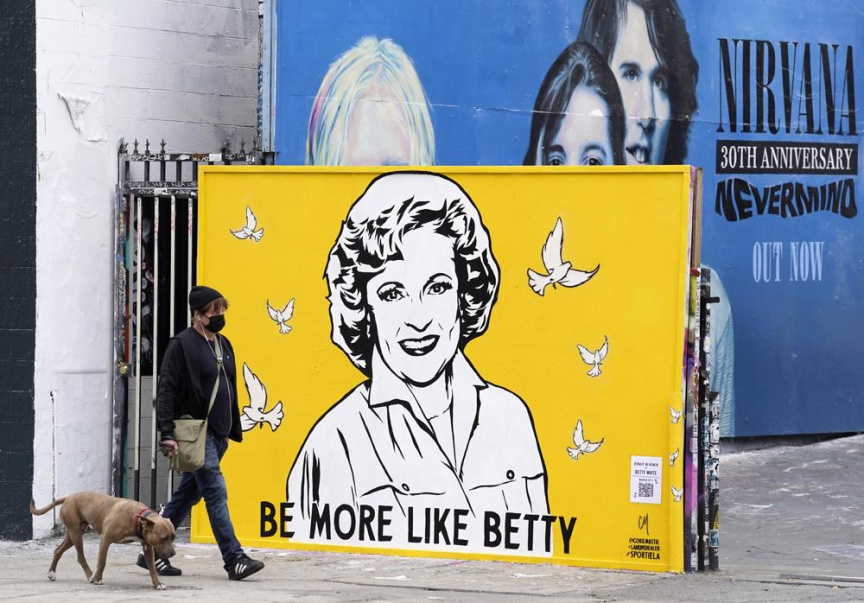 A person walks a dog past a new mural of the late actress Betty White by artist Corie Mattie, Tuesday, Jan. 13, 2022, in Los Angeles. Mattie added a QR code to the mural so people walking by can donate to the local shelter Wagmor Pets Dog Rescue in honour of White, an animal welfare advocate. White died Dec. 31, 2021, at age 99. (AP Photo/Chris Pizzello)

The late Betty White was a tireless lifetime advocate for animals, from caring for those without homes to launching her own weekly TV show, “The Pet Set,” dedicated to her celebrity friends and their pets.

Her most far-reaching contribution, though, maybe yet to come: On Monday, fans of White will be poised to donate to animal welfare charities and shelters as part of what’s been dubbed the #BettyWhiteChallenge. And animal welfare nonprofits are gearing up to capitalize on the viral tribute to the star of “The Golden Girls” and “Hot in Cleveland” on what would have been her 100th birthday.

“I’ve had many conversations with Betty about animal welfare, and I know she’s looking down from heaven and really smiling,” said Robin Ganzert, who leads American Humane, an animal welfare organization that White was involved with for more than 60 years.

It isn’t exactly clear who started the #BettyWhiteChallenge on social media shortly after White’s death on Dec. 31. However it began, the idea — to donate $5 to a local animal rescue organization in White’s name on her birthday — quickly took off and drew support from celebrities like actors Mark Hamill and George Takei on Twitter.

Traffic to American Humane’s website spiked after White’s passing. Ganzert said donations, too, have increased. The nonprofit is waiting to reveal by how much until more gifts flood in, including sizable donations it’s expecting from some donors.

During the decades in which White was involved with the organization, she made fundraising appeals and served on its board and as a presenter and judge on its televised show featuring “hero” dogs. During tapings of “The Pet Set” in the early 1970s, Ganzert said, White would have American Humane representatives on set to ensure that animals were safe. In 2012, the nonprofit honoured her with its highest award, the National Humanitarian Medal.

Ganzert would also give White a photo book each year of the animals the organization helped.

“She kept those out on her coffee table,” Ganzert said. “And (it) always touched me whenever we would visit.”

Best Friends Animal Society, a Utah-based animal welfare organization, has raised $25,000 in donations made in White’s name, according to the group’s chief mission officer Holly Sizemore. The group has promoted the #BettyWhiteChallenge broadly across its social media channels to drum up support both for its work and other organizations.

“That’s the beauty of animal welfare,” Sizemore said. “There’s something for everyone to support. There’s so much good work happening and so much opportunity, particularly right now, to make the world a better place for people and animals.”

Sizemore hopes that Monday will bring plenty of donations and attention to animal welfare.

“What an incredible opportunity to honour Betty White’s legacy — to come together as a nation and celebrate something that she was so passionate about, her love for animals,” she said.

Maintaining that connection with #BettyWhiteChallenge donors is the main test for animal welfare nonprofits after Monday. Viral fundraising efforts can bring in a stream of money, but experts say donations tend to drop off quickly.

Sarah Newhall, the chief strategy officer of the fundraising firm MissionWired, says charities can best capitalize on these moments if they already have a strong foundation in place to engage new donors — whether through emails, a website, social media or other methods.

“What it allows them to do is really use that tent-pole moment to get in front of an audience they might not otherwise have gotten,” Newhall said. But, she added, retaining these donors can be an uphill battle because the push to give is tied to one day, and the motivation to one person. Animal groups might also become overshadowed by other organizations soliciting donations during Martin Luther King Jr. Day, which also falls on Monday.

North Shore Animal League America, a no-kill animal rescue and adoption organization, plans to engage new #BettyWhiteChallenge donors through a mix of social media appeals and invitations to visit its adoption centre in Port Washington, New York, said Joanne Yohannan, the organization’s senior vice president of operations. It is also dedicating its next 100 animal rescues to White in honour of her 100th birthday.

The organization has received a donation from the Hallmark Channel in honour of White, part of a tribute that also includes a “Golden Girls” marathon and her Hallmark movie “The Lost Valentine” on Jan. 17.

“It’s about raising awareness for the plight of homeless animals and what can be done to help them, including volunteering and adopting,” Yohannan said.

Baldwin: ‘Someone is responsible for shooting; not me'

Lawsuit: Baldwin had no reason to fire gun

Britney under investigation over battery of staff

Meat Loaf, ‘Bat Out of Hell’ rock superstar, dies at 74