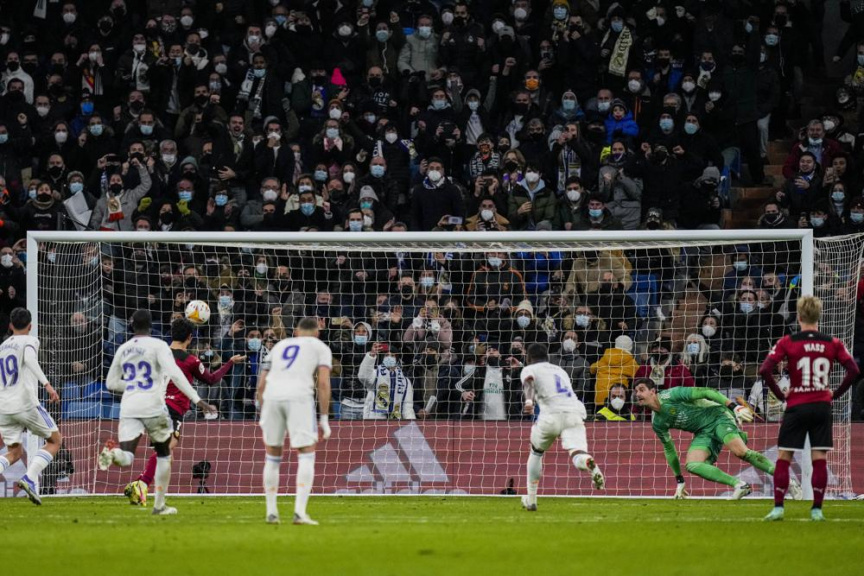 MADRID (AP) — Despite the absence of key players, Sevilla is not slowing down in its fight to win the Spanish league for the first time in nearly 80 years.

Atlético Madrid’s hopes of repeating as champion took another hit when it couldn’t manage more than a 2-2 draw at Villarreal despite Ángel Correa’s beautiful goal from near the midfield line.

Rafa Mir scored the winner in the first half to move Sevilla within five points of Madrid with a game in hand. Madrid beat Valencia 4-1 at home on Saturday.

It was the fifth victory in the last six matches for Sevilla, with its only setback a draw against Barcelona when Sevilla played most of the second half with 10 men.

The triumph came despite Sevilla playing without several key players because of injuries and international duty. Among those unavailable Sunday were goalkeeper Yassine Bounou and strikers Youssef En-Nesyri and Munir El Haddadi, who are with Morocco at the African Cup of Nations. The team also lost defender Jules Koundé at halftime because of an injury.

“I just hope there’s nothing serious with Koundé,” Sevilla coach Julen Lopetegui said. “We need to start recovering players. We’ve been playing the last two months without almost 10 players because of injuries.”

Seeking its first league title since its lone triumph in 1945-46, Sevilla is unbeaten in the league since a loss at Madrid in November.

“We’ll try to keep this dynamic match after match and then we’ll see what happens when it’s all over,” Mir said.

Getafe had stunned Madrid 1-0 in the last round. It was unbeaten in six straight rounds — a run that moved the team out of the relegation zone after a poor start to its season. It stayed in 16th place, two points from the relegation zone.

It was Sevilla’s sixth straight league win against Getafe, all without conceding.

The hosts opened the scoring at the Ramón Sánchez-Pizjuán Stadium with Mir’s neat back-flick goal from close range in the 22nd minute after a nice run by Lucas Ocampos through the right flank.

Mir redirected Ocampos’ cross and the ball just barely got past the legs of a defender and went underneath the hands of Getafe goalkeeper David Soria.

“I didn’t expect Mir to get to the ball and I was late trying to reach for it,” said Soria, a former Sevilla goalkeeper. “It was an unfortunate mistake. It happens.”

Atlético was held at Villarreal after taking an early lead with Correa’s superb goal from in front of the midfield line.

He intercepted a poor pass by Villarreal midfielder Dani Parejo and fired a booming shot over goalkeeper Gerónimo Rulli.

“I know Rulli well, I know that he likes to play away from the net,” said Correa, Rulli’s teammate at the Argentine national team.

Villarreal equalized through Pau Torres’ goal in the 29th and took the lead thanks to Alberto Moreno in the 58th before Geoffrey Kondogbia equalized in the 67th. Kondogbia was sent off in stoppage time.

Villarreal was awarded a penalty kick in the first half for a handball but Parejo’s goal off the rebound of Jan Oblak’s save was disallowed because of another handball.

Atlético moved to fourth place but stayed 16 points behind Madrid with a game in hand. Villarreal, which had won four straight league games, was eighth.

Third-place Real Betis held on to a 1-1 draw at Rayo Vallecano despite playing a man down from the 33rd following a controversial red card for defender Álex Moreno.

Betis loudly complained against the straight card shown to Moreno for what was considered to be a dangerous foul. Moreno kicked the head of Isi Palazón as he lowered his head to try to reach for the ball.

“Real Betis have always been absolutely respectful with the referees and their decisions, but what we have seen today is incomprehensible,” the club said on Twitter. “The job of a referee is to be fair and just, not the disgrace we have seen today at Vallecas (Stadium.”

Rayo had entered the match with the league’s best home record, with eight wins and one draw.

Betis is 10 points behind Seville rival Sevilla. Rayo is seventh.

Athletic Bilbao drew 0-0 at Alavés in a Basque Country derby, while Osasuna won 2-0 at home against Cádiz.

After this round, Atlético and Athletic will join Madrid and Barcelona in the Spanish Super Cup that will be staged in Saudi Arabia.

Arsenal out of FA Cup, Liverpool and Spurs avoid upsets