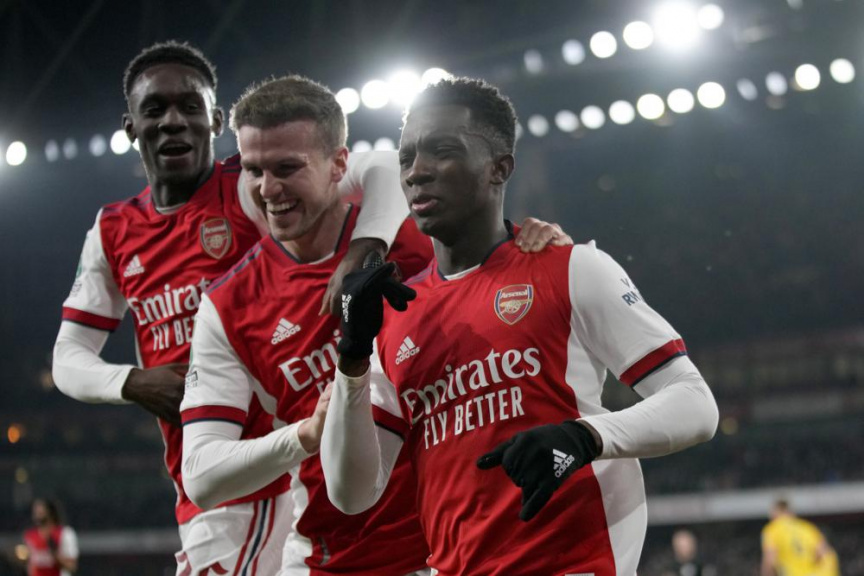 LONDON (AP) — Even after scoring a hat trick for Arsenal, Eddie Nketiah was momentarily upstaged by another academy graduate. It’s not often a teenager scores on his debut.

Eleven minutes after coming off the bench, Charlie Patino completed a 5-1 victory over Sunderland to send Arsenal into the semifinals of the League Cup on Tuesday.

The stoppage-time goal at Emirates Stadium saw the 18-year-old midfielder prod in a shot after Nicolas Pépé rolled the ball into the penalty area.

Pépé was also Arsenal’s second scorer in the first half after Nketiah netted the opener from close range in the 17th minute against the third-tier side.

After Nathan Broadhead pulled one back, Nketiah’s back-heeled flick restored Arsenal’s two-goal advantage four minutes into the second half. Nketiah completed his treble in the 58th minute after getting on the end of Pépé’s cross.

It’s another encouraging result for Arsenal, which is fourth in the Premier League as it tries to end a five-season exile from the Champions League.

“When you win football matches everything looks much better,” manager Mikel Arteta said. “We have to be consistent with the decisions that we make, keep trying to improve all the time the way we play, perform better and better and the results will come. They are coming right now and now it is about consistency. There are a lot of games coming up and we want to maintain that form.”

“We’re going to need him and he’s going to play more minutes,” Arteta said. “He wants to be the best and works all the time to do that. He’s a player that has come through our system and that’s why we want to keep him.”