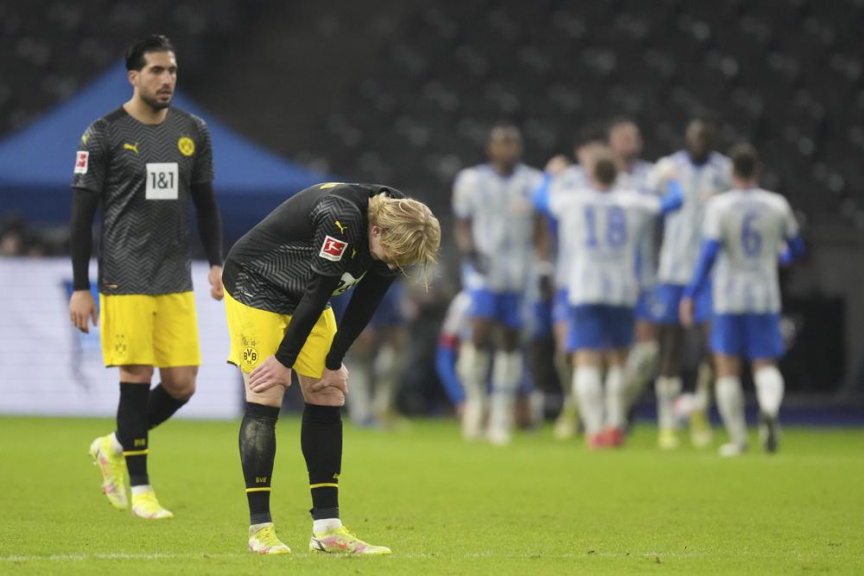 BERLIN (AP) — Hertha Berlin finally delivered the performance its long-suffering fans were waiting for by coming from behind to beat Borussia Dortmund 3-2 in the Bundesliga on Saturday.

Former Bayern Munich youth player Marco Richter scored twice to give Hertha fans an early Christmas present and do his old team a favor. Bayern was left nine points clear at the top at the halfway stage, the league’s winter break.

Just, there were few fans in Berlin’s Olympiastadion to see it. Capacity was capped at 5,000 due to restrictions against the coronavirus. Hertha’s players celebrated with those lucky enough to attend, while Mariah Carey singing “Merry Christmas” blasted around the mostly empty 74,000-capacity stadium.

It was arguably Hertha’s best performance of the season, and it gave new coach Tayfun Korkut his second win from four games in charge since taking over from the fired Pál Dárdai. Korkut’s players were clearly keen on atoning for Tuesday’s lackluster showing in the 4-0 loss in Mainz.

Myziane Maolida had the home fans celebrating early when he guided Peter Pekarik’s cross inside the far post. But the goal was ruled out through VAR for an offside.

Julian Brandt added to Hertha frustration with the opener in the 31st, a brilliant chip taking the ball over Hertha goalkeeper Alexander Schwolow and inside the far post.

Hertha forced the initiative and Ishak Belfodil equalized with a fine individual goal in the 51st, outpacing Axel Witsel down the left before prodding the ball under Marwin Hitz in the Dortmund goal.

Richter rewarded the home team’s endeavor with another goal in the 57th, curling his shot inside the far post after Maolida laid the ball back.

Thorgan Hazard thought he equalized at the other end, but Erling Haaland was just offside in the buildup.

Richter fired in his second goal from a rebound after Hitz saved Belfodil’s shot in the 69th. Steffen Tigges pulled one back with a header to Raphael Guerreiro’s cross in the 83rd, but Hertha managed to hold on.

Leipzig’s hopes of a fresh start under a new coach are fading after losing at home to 10-man Arminia Bielefeld 2-0.

Japanese midfielder Masaya Okugawa scored the visitors’ second goal in the 75th minute, not long after Fabian Klos was sent off for a bad challenge on Leipzig defender Willi Orban.

Janni Serra put Bielefeld in front from a rebound in the 57th, and Leipzig was unable to make its undoubted attacking prowess count.

It was the first loss in three games for new Leipzig coach Domenico Tedesco, who took over this month after the club dismissed Jesse Marsch.

Hoffenheim defender Kevin Akpoguma scored in injury time to deny Gladbach its first win after a run of four defeats. Breel Embolo had the visitors on their way to victory, but they failed to stop Akpoguma equalizing in the 91st for 1-1.

A brilliant early goal from Max Kruse was enough for Union Berlin to finish the year on a high after winning at Bochum 1-0. Kruse got married on Thursday but showed no ill effects from the honeymoon in the 16th minute when he met Grischa Prömel’s layoff with a half volley inside the top left corner.

Union climbed to sixth, level on points with fifth-placed Eintracht Frankfurt, which defeated Mainz 1-0 in their derby.