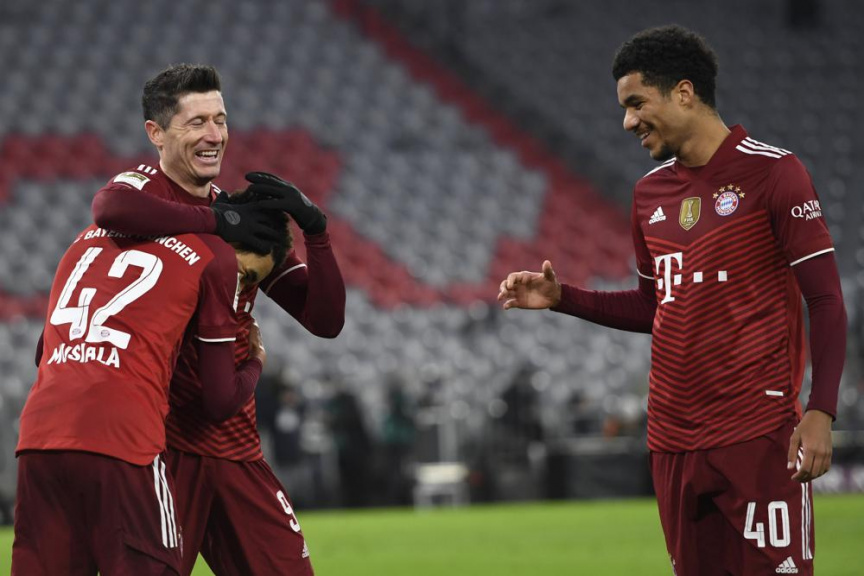 The Poland star scored his 43rd Bundesliga goal of the year to cap a 4-0 win for Bayern over Wolfsburg and eclipse the previous best mark for goals in a calendar year set in 1972 by “Der Bomber.”

Lewandowski, who broke Müller’s 49-year-old Bundesliga record for goals in a season with his 41st last May in the last minute of a 5-2 win over Augsburg, again left it late to score on Friday. He met Jamal Musiala’s layoff acrobatically to grab the next record in the 87th minute.

“It was a wonderful goal,” Bayern coach Julian Nagelsmann said. “Upa (Dayot Upamecano) chipped the ball and Jamal made a good run. The goal itself was very difficult to score.”

Nagelsmann noted that Lewandowski scored with his “weaker” left foot. Asked if the forward had a weaker foot, the Bayern coach replied, “Apparently not.”

Müller didn’t live to see Lewandowski take another of his records. The Bayern great died aged 75 in August. He remains the Bundesliga’s top scorer with 365, all for the Bavarian powerhouse. Lewandowski has 296 including 74 for Borussia Dortmund.

Thomas Müller – no relation to Gerd – celebrated his 400th Bundesliga game by scoring one goal and setting up another to help Bayern open a nine-point lead before the rest of the 17th round. Upamecano and Leroy Sané also scored against Wolfsburg.

Müller got Bayern off to a flying start in the seventh minute when he tapped home the rebound after Koen Casteels stopped Serge Gnabry’s effort from range.

Wout Weghorst almost replied at the other end but Manuel Neuer was equal to the Dutch forward’s shot. Weghorst was to have another chance later despite Bayern’s domination of possession.

Lewandowski came closest with a header that was little trouble for Casteels to gather, but Bayern emerged with renewed vigor against the deep-sitting visitors after the break.

Müller set up Upamecano for the team’s second goal in the 57th, three minutes before Sané scored with a fine strike.

Gnabry did his best to set up Lewandowski, who fired over and was then thwarted by Casteels. When it was starting to look like he might finally have to just share a record with Gerd Müller, Lewandowski scored to claim it for himself.

The Poland star had already scored 18 times in the league this season – one more than the entire Wolfsburg team had – and he scored 23 goals in 20 previous Bundesliga games against Wolfsburg – more than against any other team.

Wolfsburg’s run of defeats stretched to seven games across all competitions.