Russia sets out tough demands for security pact with NATO 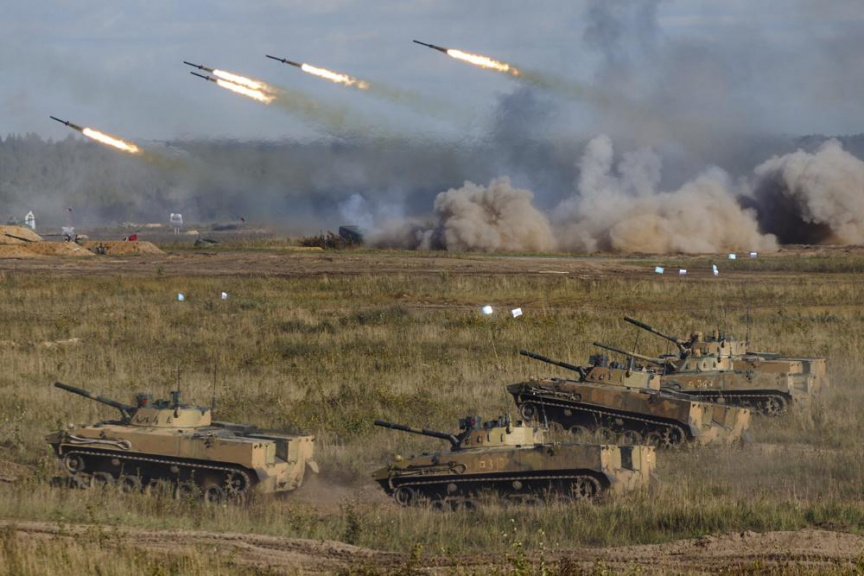 In this photo released by the Russian Defense Ministry Press Service, a view of the joint strategic exercise of the armed forces of the Russian Federation and the Republic of Belarus Zapad-2021 at the Mulino training ground in the Nizhny Novgorod region, Russia, Saturday, Sept. 11, 2021.(Vadim Savitskiy/Russian Defense Ministry Press Service via AP, File)

MOSCOW (AP) — Russia on Friday published draft security demands that NATO deny membership to Ukraine and other former Soviet countries and roll back the alliance’s military deployments in Central and Eastern Europe — bold ultimatums that are almost certain to be rejected by the U.S. and its allies.

The proposals, which were submitted to the U.S. and its allies earlier this week, also call for a ban on sending U.S. and Russian warships and aircraft to areas from where they can strike each other’s territory, along with a halt to NATO military drills near Russia.

The demand for a written guarantee that Ukraine won’t be offered membership already has been rejected by the West, which said Moscow doesn’t have a say in NATO’s enlargement.

NATO’s secretary-general responded Friday by emphasizing that any security talks with Moscow would need to take into account NATO concerns and involve Ukraine and other partners. The White House similarly said it’s discussing the proposals with U.S. allies and partners, but noted that all countries have the right to determine their future without outside interference.

The publication of the demands — contained in a proposed Russia-U.S. security treaty and a security agreement between Moscow and NATO — comes amid soaring tensions over a Russian troop buildup near Ukraine that has raised fears of an invasion. Moscow has denied it has plans to attack its neighbor, but is seeking legal guarantees precluding NATO expansion and deploying weapons there.

Deputy Foreign Minister Sergei Ryabkov said Russia’s relations with the U.S. and NATO have approached a “dangerous point,” noting that alliance deployments and drills near Russia have raised “unacceptable” threats to its security.

Moscow wants the U.S. to start talks immediately on the proposals in Geneva, he told reporters.

NATO Secretary-General Jens Stoltenberg said the alliance had received the Russian documents, and noted that any dialogue with Moscow “would also need to address NATO’s concerns about Russia’s actions, be based on core principles and documents of European security, and take place in consultation with NATO’s European partners, such as Ukraine.”

He added that the 30 NATO countries “have made clear that should Russia take concrete steps to reduce tensions, we are prepared to work on strengthening confidence building measures.”

White House press secretary Jen Psaki noted that strategic security talks with Moscow go back decades, adding that “there’s no reason we can’t do that moving forward to reduce instability, but we’re going to do that in partnership and coordination with our European allies and partners.”

“There will be no talks on European security without our European allies and partners,” Psaki said. ”We will not compromise the key principles on which European security is built, including that all countries have the right to decide their own future and foreign policy free from the outside interference.”

Moscow’s draft also calls for efforts to reduce the risk of incidents involving Russia and NATO warships and aircraft, primarily in the Baltic and the Black seas, increase the transparency of military drills and other confidence-building measures.

A senior U.S. official said some of the Russian proposals are part of an arms control agenda between Moscow and Washington, while some other issues, such as transparency and deconfliction, concern all 57 members of the Organization for Security and Cooperation in Europe, including Ukraine and Georgia.

The official, who briefed reporters on the condition of anonymity in order to talk about the proposals, said the U.S. is looking at how to engage every country whose interests are affected in prospective talks on European security issues and will respond to Moscow sometime next week with concrete proposals after consulting with the allies.

President Vladimir Putin raised the demand for security guarantees in last week’s video call with U.S. President Joe Biden. During the conversation, Biden voiced concern about a buildup of Russian troops near Ukraine and warned him that Russia would face “severe consequences” if Moscow attacked its neighbor.

U.S. intelligence officials say Russia has moved 70,000 troops to its border with Ukraine and is preparing for a possible invasion early next year. Moscow denies any intention to attack and accused Ukraine of planning an offensive to reclaim control of rebel-held eastern Ukraine — an allegation Kyiv has rejected.

Fighting between Ukrainian forces and Russia-backed separatists in eastern Ukraine began after Russia’s 2014 annexation of Ukraine’s Crimean Peninsula. It has killed over 14,000 people and devastated Ukraine’s industrial heartland, known as the Donbas.

The Russian demands would oblige Washington and its allies to pledge to halt NATO’s eastward expansion to include other ex-Soviet republics and rescind a 2008 promise of membership to Ukraine and Georgia. The alliance already has firmly rejected that demand from Moscow.

Moscow’s documents also would preclude the U.S. and other NATO allies from conducting any military activities in Ukraine, other countries of Eastern Europe and ex-Soviet republics in the Caucasus and in Central Asia.

The Ukrainian Foreign Ministry commented on Moscow’s proposals by emphasizing that it’s up to the alliance and Ukraine to discuss NATO membership prospects, adding that the same relates to Ukraine’s military cooperation with other countries.

“The Russian aggression and the current Russian escalation along the Ukrainian border and on the occupied territories is now the main problem for the Euro-Atlantic security,” said its spokesman Oleg Nikolenko.

The Russian proposal also ups the ante by putting a new demand to roll back NATO military deployments in Central and Eastern Europe, stating that the parties agree not to send any troops to areas where they hadn’t been present in 1997 — before NATO’s eastward expansion started — except for exceptional situations of mutual consent.

The draft proposals contain a ban on the deployment of U.S. and Russian warships and aircraft to “areas where they can strike targets on the territory of the other party.”

Moscow has long complained about patrol flights by U.S. strategic bombers near Russia’s borders and the deployment of U.S. and NATO warships to the Black Sea, describing them as destabilizing and provocative.

Russia’s draft envisages a pledge not to station intermediate-range missiles in areas where they can strike the other party’s territory, a clause that follows the U.S. and Russian withdrawal from a Cold War-era pact banning such weapons.

The Russian draft also calls for a ban on the deployment of U.S. and Russian nuclear weapons on the territory of other countries — a repeat of Moscow’s longtime push for the U.S. to withdraw its nuclear weapons from Europe.

Dmitri Trenin, the director of the Carnegie Moscow Center, noted that the publication of the Russian demands signals that the Kremlin considers their acceptance by the West unlikely.

“This logically means that Russia will have to assure its security single-handedly” using military-technical means, he said on Twitter.