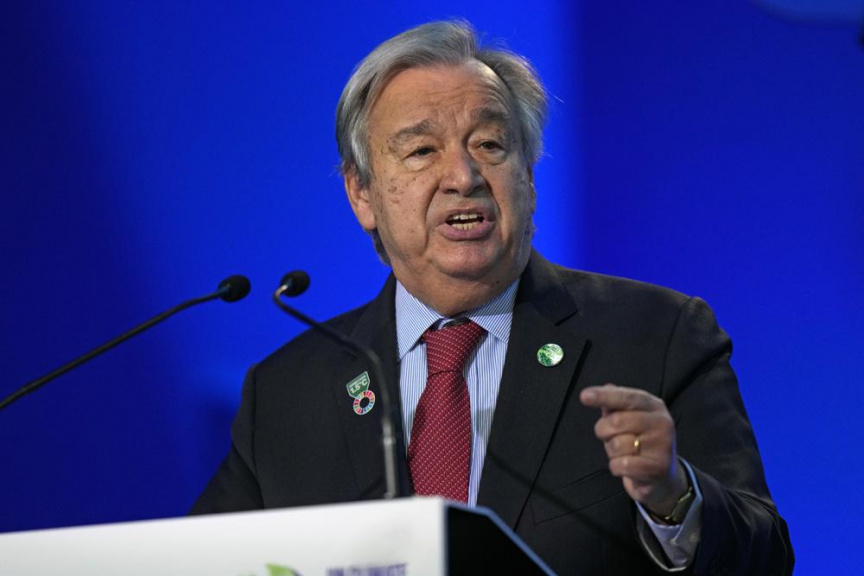 NEW YORK (AP) — U.N. Secretary-General Antonio Guterres exhorted the world Thursday to make “concrete” progress within days toward a now-distant goal of vaccinating 40% of the global population against COVID-19 before the year ends.

“Vaccine inequity is giving variants a free pass to run wild,” Guterres — working from home because of exposure to the coronavirus — told reporters by videoconference as countries grappled with the spread of the virus’ omicron variant.

Scientists have long warned that patchy vaccination raises the risk of worrisome coronavirus variants emerging. That’s because the more the virus spreads, the more chances it has to mutate.

While there are many unknowns about the new omicron variant, the World Health Organization says it’s spreading faster than any other variant to date.

“All countries, especially those that have potential of responsibilities, must take concrete action in the coming days to make greater progress” toward the year-end goal, Guterres said. He added that they need to “be far more ambitious” in moving toward the WHO’s next benchmark: inoculating 70% of the world by the middle of next year.

The head of the vaccine alliance Gavi, which is leading a U.N.-backed push to get COVID-19 vaccines to developing countries, told The Associated Press on Tuesday of early signs that omicron fears are prompting rich countries to start withholding donations to the public-private partnership, which is the lead manager of the U.N.-backed COVAX program.

Roughly 10 billion vaccine doses have been delivered worldwide, the vast majority of them to rich countries. COVAX has delivered just over 700 million.

It initially aimed to distribute 2 billion doses by the end of this year but trimmed the goal in September to 1.4 billion.

'Expired vaccines will not be administered'