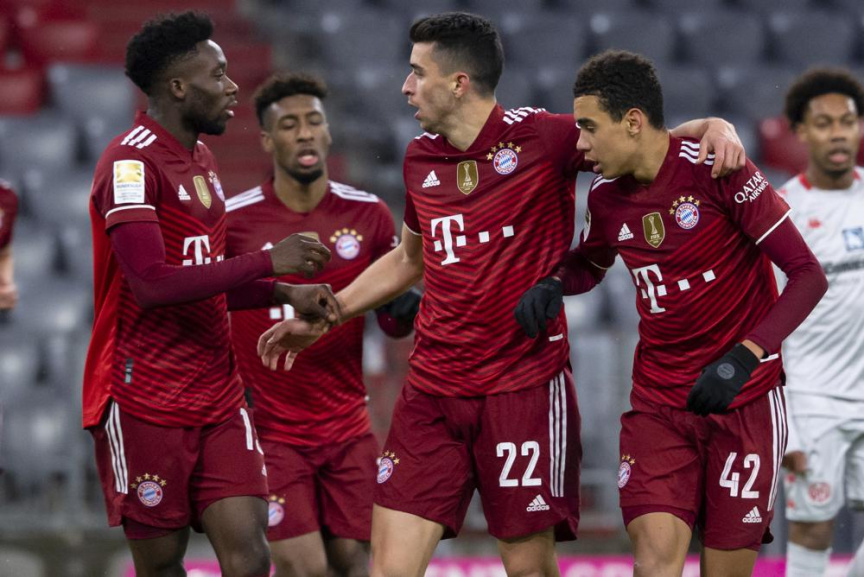 BOCHUM, Germany (AP) — Bayern Munich extended its lead in the Bundesliga to six points after Jamal Musiala scored in a come-from-behind 2-1 win over Mainz and Borussia Dortmund was held by local rival Bochum to 1-1 on Saturday.

Karim Onisiwo headed Mainz into a surprise lead in the 22nd minute in a stadium empty because of coronavirus restrictions, but Kingsley Coman evened the score for Bayern just after the break. The 18-year-old Musiala earned Bayern the win with his sixth goal of the season in the 74th after finding space in a crowded penalty area.

Bayern’s win restored a commanding lead in its pursuit of a 10th consecutive Bundesliga title and all but ensured the team will take the symbolic prize of being top at the Christmas break, with two games to go.

The Bundesliga no longer has the Ruhr Derby rivalry between Dortmund and Schalke after relegation for Schalke last season, but smaller neighbor Bochum proved more than competitive enough to trouble Dortmund.

Dortmund was left aggrieved by the refereeing in its 3-2 Klassiker loss to Bayern last week — midfielder Jude Bellingham was fined for questioning the referee’s integrity and coach Marco Rose received a touchline ban. Dortmund was on the losing side of some more crucial calls on Saturday.

Referee Matthias Jöllenbeck immediately pointed to the spot when Dortmund goalkeeper Gregor Kobel rushed out to intercept Christopher Antwi-Adjei shortly before halftime and sent the winger flying. Sebastian Polter converted the spot kick, sending Kobel the wrong way. Marius Wolf thought he leveled for Dortmund in the 53rd but a video review spotted Bellingham offside and in the goalkeeper’s line of sight.

Hosting local rival Dortmund for the first time since March 2010 after promotion, Bochum leaned heavily on goalkeeper Manuel Riemann for a string of key saves, and was helped by some wayward shooting from Dortmund striker Erling Haaland. Julian Brandt finally salvaged a draw in the 85th off a cross from Haaland.

Bochum ended the day ninth after what coach Thomas Reis called a “bonus point” from a game his team was widely favored to lose.

Leipzig had a winning start to life under new coach Domenico Tedesco with a 4-1 win over struggling Borussia Mönchengladbach. Tedesco’s team ended the three-game losing streak in the Bundesliga which helped cost coach Jesse Marsch his job last week.

Leipzig defender Josko Gvardiol opened the scoring off a free kick from Angelino in the 22nd — his first goal for the team — and forward André Silva doubled the advantage 11 minutes later. Ramy Bensebaini gave Gladbach brief hope of a comeback with a goal in the 88th but Christopher Nkunku and Benjamin Henrichs each scored for Leipzig in added time.

Defeat left Gladbach 13th and heaped more pressure on coach Adi Hütter. He delighted fans with a 5-0 demolition of Bayern in the German Cup in October but the team — in the Champions League only last season — has lost seven of 15 Bundesliga games under Hütter and was humbled 6-0 by Freiburg last week.

United States defender Chris Richards scored the winning goal in stoppage time as Hoffenheim won at Freiburg 2-1 to move up to fourth and into the Champions League places.

Wolfsburg lost its fifth consecutive game in all competitions 2-0 to Stuttgart. Coach Florian Kohfeldt won his first three games when he was hired in October but hasn’t won since. Wolfsburg slipped to 10th and was eliminated from the Champions League.

Stuttgart moved away from the relegation zone to 15th.