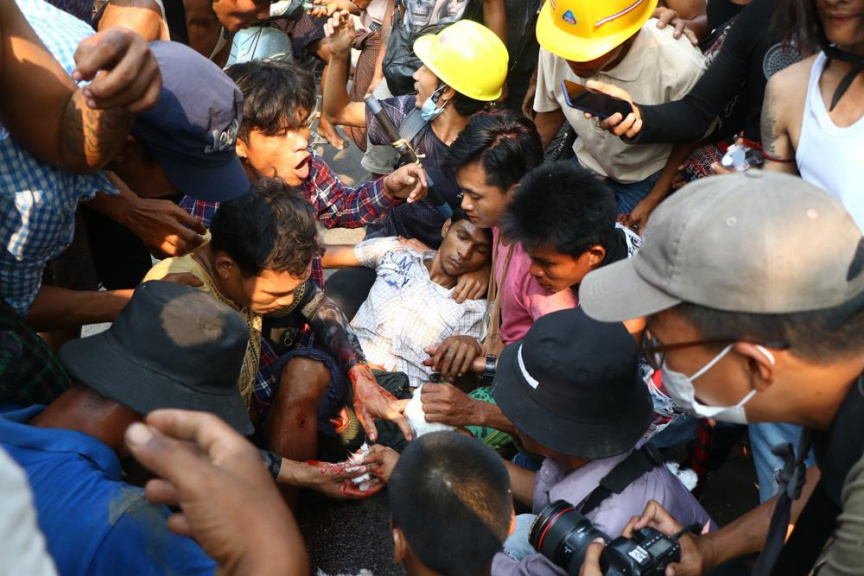 BANGKOK (AP) — The killing of at least 65 protesters in Myanmar’s biggest city on March 14 this year was planned and premeditated, and the perpetrators must be brought to justice, a rights watchdog said in a report released Thursday.

Human Rights Watch accused security forces of deliberately encircling and using lethal force against crowds in Yangon’s working class neighborhood of Hlaing Tharyar that were demonstrating against the military’s Feb. 1 seizure of power from the democratically elected government of Aung San Suu Kyi.

“Soldiers and police armed with military assault rifles fired on trapped protesters and on those trying to assist the wounded, killing at least 65 protesters and bystanders,” said the New York-based organization.

The military-installed government, which imposed martial law in the area after the violence, has described the protesters as “rioters” who burned down garment factories and blocked firefighters. Human Right’s Watch said no action is known to have been taken against any members of the security forces. No government official was immediately available for comment.

“It’s necessary to make sure that such figures are made aware that they can be tried and held to account at a later time,” she said.

Human Rights Watch said it based its findings on interviews with six witnesses and analyses of 13 videos and 31 photographs of the violence posted on social media.

“We can prove, through testimonies and digital forensics, that in videos posted by security forces, and images that show security forces pointing their weapons – assault rifles and automatic weapons - against civilians, that this was planned and coordinated,” Manny Maung said.

The report mentions a video posted on TikTok by a police officer that shows riot police preparing to advance on protesters.

“As they discuss the weapons they were going to use, one officer says to the others, ‘You guys will handle Hlaing Tharyar.’ Another replies: ‘I will show no mercy for these people,’” it says.

In the months immediately following the army’s takeover, largely peaceful demonstrations nationwide were met with increasingly brutal suppression by the security forces. In response, some protesters began using homemade weapons in self-defense.

“Some protesters used weapons, such as rocks, slings, and Molotov cocktails, in response to the security forces firing on them, but no security force casualties were reported,” the report cited witnesses as saying.

Human Rights Watch urged the international community to “respond to ongoing human rights violations and crimes against humanity in Myanmar by supplementing, strengthening, and coordinating international sanctions against the junta leadership and military.” The United States and other nations already maintain diplomatic and economic sanctions.

Since the army’s takeover, at least 1,300 protesters and bystanders have been killed, according to a detailed tally kept by the Assistance Association for Political Prisoners, which documents political repression.

“The point is that violations are continuing,” said Manny Maung. “The point of raising this now is to prove that whatever happened even nine months ago is still important because we can and we will hold these people to account and we can prove that they did this with intent.”