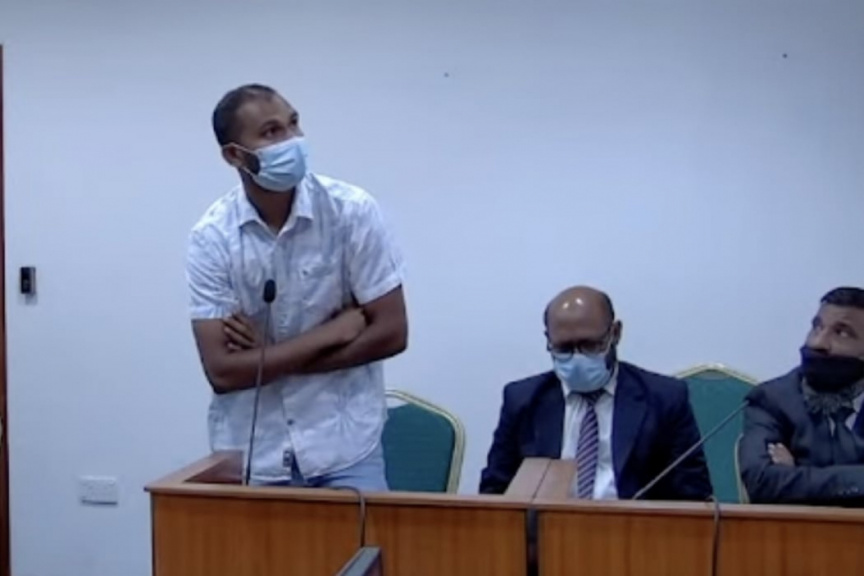 A capture from the hearing held regarding Ali Waheed's sexual misconduct allegations trial on November 28, 2021.

Criminal Court has decided that should former Tourism Minister Ali Waheed fail to appear before them in 72 hours, State Minister for Youth Assad Ali (Adubarey), who signed as his guarantor for his return within the four-month period granted by the court for his travel overseas – which expired last June – will be penalized.

Ali Waheed, currently on trial for multiple sexual offenses, had a travel ban order issued against him on July 12, 2020, by the Criminal Court. Following a review, the order was canceled on February 9, 2021, and his passport was released.

Criminal court had canceled the order and released his passport after listening to the testimony of Ali Waheed’s doctor who was summoned to court to brief the judge regarding his condition, as well as to confirm that he needed to go abroad for medical treatment. The doctor had explained that Ali Waheed’s life may be at risk, if he undergoes surgery in the Maldives.

Following the doctor’s testimony, the State had withdrawn the objections raised regarding allowing Ali Waheed to travel abroad for medical treatment.

Therefore, the Court made the decision to lift the travel ban as he had also submitted a guarantor for his return. His guarantor is Adubarey.

Ali Waheed promptly left for the UK, the same day the Criminal Court canceled a travel ban issued against him in connection to the case.

Ali Waheed’s lawyers and Adubarey were summoned to a hearing held at the Criminal Court today in connection to the case.

With reference to the Supreme Court’s order against holding online hearings in the case, the judge said that adequate time has been given for Ali Waheed’s medical treatment – therefore, ordering his appearance at the court within the next 72 hours. The judge also said that Adubarey will be penalized should Ali Waheed fail to appear.

Although the hearings in Ali Waheed’s case were held closed-doors prior to this, today’s hearing was open for the public.