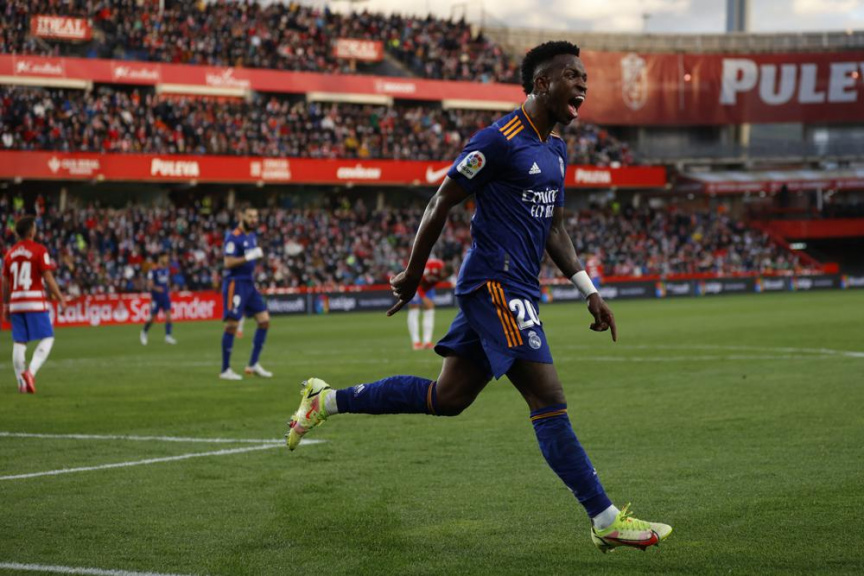 MADRID (AP) — Real Madrid kept its momentum from before the international break by winning its fourth game in a row and getting back to the top of the Spanish league.

Madrid cruised to a 4-1 win over 10-man Granada on Sunday after dominating from the start to reclaim first place.

Marco Asensio, Nacho Fernández, Vinícius Júnior and Ferland Mendy all scored to give Madrid its fourth straight victory in all competitions.

Carlo Ancelotti’s team reached 30 points from 13 league matches, one more point than Real Sociedad, which was held to a 0-0 draw at home against Valencia. Madrid is two points in front of Sevilla, which drew 2-2 at home against Alavés on Saturday.

Granada played a man down from the 67th as midfielder Ramón Rodríguez was sent off for a hard sliding tackle on Vinícius Júnior. Granada coach Robert Moreno was later sent off for complaining.

The victory extended Madrid’s unbeaten streak to seven matches in all competitions ahead of its Champions League visit to Sheriff on Wednesday.

Ancelotti took some of his key players out of the match in the second half to give them some extra rest, including Luka Modric, Karim Benzema, Vinícius Júnior and Toni Kroos.

“After the international break it’s always hard to regain momentum, but the team was focused and in general we played a great match,” Asensio said. “We got the three points, which was the most important thing.”

It was the 13th straight league win by Madrid over Granada, which has won only two of its 13 league matches this season. It sits in 17th place with 11 points, inside the relegation zone.

Asensio put Madrid ahead from inside the area in the 19th minute after a pass by Kroos, who also set up Nacho’s goal in the 25th. Vinícius Júnior added to the lead after passes by Benzema and Modric in the 56th, and Ferland Mendy closed the scoring from inside the area after an assist by Casemiro in the 76th.

Granada’s lone goal came in the 34th when a low shot by forward Luis Suárez from outside the area deflected off Nacho before going in.

Ancelotti was without Gareth Bale and Eden Hazard after they returned from the international break with health issues. Bale hurt a leg muscle with Wales, while Hazard had a stomach virus.

Sociedad missed its chance to take over the league lead after a home draw against Valencia, a result that extended its unbeaten streak to 17 matches in all competitions.

The hosts were reduced to 10 players in the 76th because of a red card for defender Aritz Elustondo.

Sociedad’s only loss this season came in its opener at Barcelona in August.

Real Betis ended its three-game losing streak in all competitions with a convincing 3-0 win at relegation-threatened Elche.

Juanmi Jiménez, Willian José and Nabil Fekir scored a goal each in the first half-hour for Manuel Pellegrini’s team.

Betis played a man down from the 67th because of a red card for defender Hector Bellerín.

Elche, in 18th place with 11 points from 14 matches, fired coach Fran Escribá after the match, which extended its winless streak to six straight games.

Getafe beat Cádiz 4-0 at home to move off the bottom of the table.

It was the second victory for Getafe this season after it started with seven straight losses. Its only other win was at Espanyol two rounds ago, also at home.

The result moved the Madrid club two points ahead of last-place Levante, which drew 0-0 against Athletic Bilbao at home on Friday.

Cádiz, which was unbeaten in three league matches, stayed in 16th place, one point from the relegation zone. It hosts defending champion Atlético Madrid in the next round.

Barca squanders lead in 3-3 draw before Xavi takes over

Xavi Hernández to return to Barcelona as its new coach

Aguero out at least 3 months after heart tests