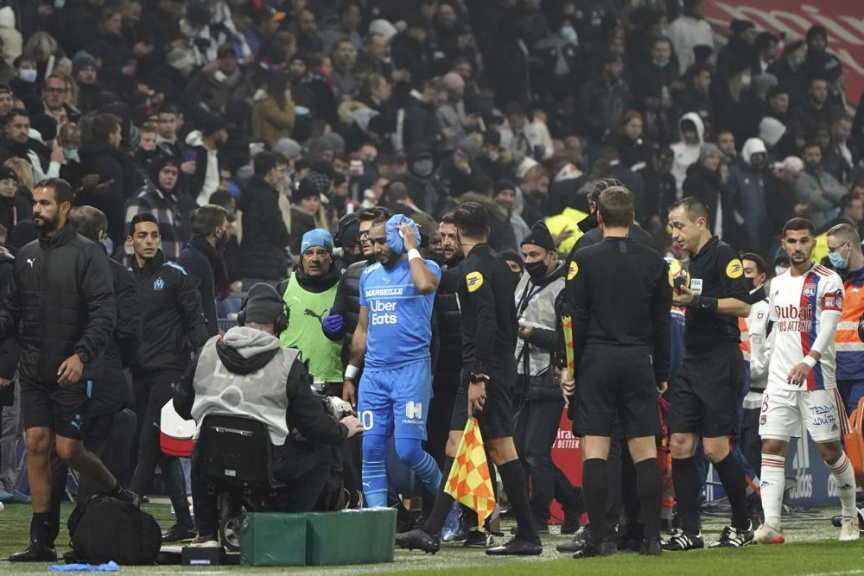 Marseille's Dimitri Payet, center, is surrounded by his staff as he leaves the field after being injured by an object thrown by a Lyon's supporter during the French League One soccer match between Lyon and Marseille, in Decines, near Lyon, central France, Sunday, Nov. 21, 2021. (AP Photo/Laurent Cipriani)

In the latest round to be marred by fan violence, a game in Lyon was abandoned with the score at 0-0 after Marseille midfielder Dimitri Payet was hit on the head by a bottle of water thrown from the stands while taking a corner kick. Payet collapsed to the ground in the fifth minute but was able to get up after receiving treatment.

The referee ordered players to head back to the locker room with play suspended. After a wait of about 75 minutes, a stadium announcement said play would resume but Marseille players stayed in their dressing room. About two hours after kickoff, it was announced that the game had been abandoned.

Against Clermont, Nice winger Gouiri equalized with a volley in the 77th. He then raised his tally to eight league goals this season by controlling a corner in the 82nd before guiding the ball into the far corner.

Clermont had a fourth straight loss to fall into the relegation zone. The hosts had dominated the first half and took the lead in the 17th when Florent Ogier headed in a free kick from Jason Berthomier.

Nice goalkeeper Walter Benitez limited the damage by saving efforts from Vital Nsimba in the fifth minute, Jim Allevinah in the seventh, Johan Gastien in the 12th and Salis Abdul Samed in the 40th.

“It was one of our worst games in terms of performance. We still managed to grind out a positive result,” Nice defender Jean-Clair Todibo told Canal Plus television. “Now if we keep playing like this, we won’t stay in second place for long.”

Also Sunday, Brest earned a third straight win in the French league by stunning Lens 4-0 to move away from the relegation zone. Lens dropped to fourth place, two points behind Nice.

Brest captain Brendan Chardonnet doubled the lead in the 13th by diverting in a corner with his back.

Romain Faivre notched his fifth goal this season with a curling shot from the edge of the box to make it 3-0 in the 33rd.

Le Douaron put the result beyond doubt in the 69th by holding off Kevin Danso to fire into the top corner.

Lens was down to 10 men in the 74th when substitute Arnaud Kalimuendo was sent off for a tackle from behind on Ronael Pierre-Gabriel.

Brest couldn’t win any of its first 11 games this season but recently turned a corner, defeating Monaco and Lorient.

“That victory against Monaco did a lot of good for us,” Faivre told Amazon Prime Video. “We feel the players are more confident. We play forward much more. We also have a defensive solidity, we are much more compact. There’s a better balance.”

Angers moved into sixth place by edging Lorient 1-0 with a penalty from Thomas Mangani in the 67th.

Strasbourg equalized with the last kick of the game in a 1-1 draw with Reims as substitute Jean-Ricner Bellegarde curled home a free kick in the seventh minute of stoppage time.

Saint-Etienne remained in the relegation zone despite beating Troyes 1-0 with a powerful long-range strike from Peru defender Miguel Trauco in the 61st.

Opa Nguette came off the bench and scored twice to help bottom side Metz rally from a 2-0 deficit and draw 3-3 with Bordeaux. Nguette capitalized on a corner to net from close range in the 52nd before scoring the equalizer with a looping header in the 71st. Metz midfielder Farid Boulaya was sent off in the 68th for a poor challenge on Yacine Adli.

On Saturday, Lionel Messi scored his first goal in the French league by leading PSG to a 3-1 win over Nantes. Rennes snatched third place by downing Montpellier 2-0.

On Friday, defending champion Lille drew 2-2 with Monaco to stay in the bottom half of the table.