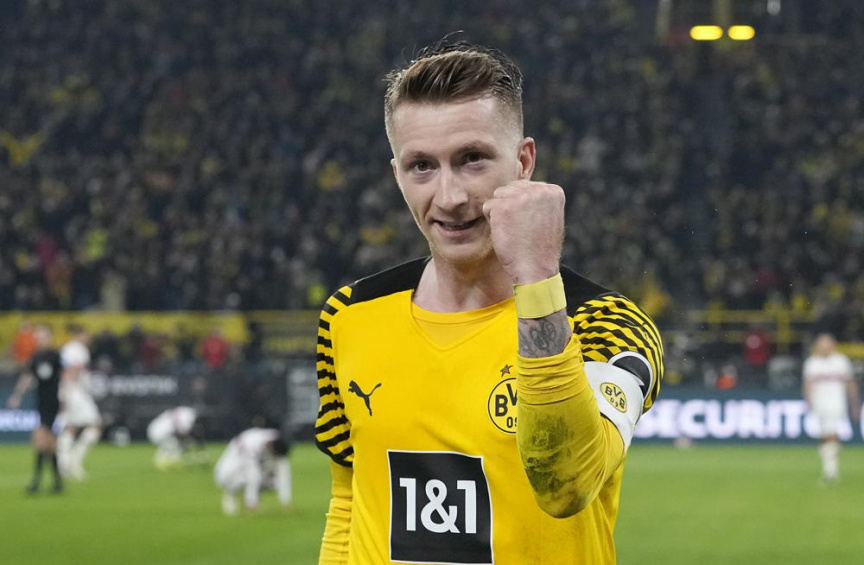 BERLIN (AP) — Borussia Dortmund captain Marco Reus scored late to cut the gap on Bundesliga leader Bayern Munich to a point with a 2-1 win at home against Stuttgart on Saturday.

Dortmund looked set for disappointment as it struggled to take advantage of Bayern’s shock 2-1 loss at Augsburg the night before, but Reus grabbed the home team’s winner in the 85th minute when he tapped in the rebound after Florian Müller had saved Thorgan Hazard’s initial effort.

Dortmund was again without injured star forward Erling Haaland, who watched from the stands.

Dutch striker Donyell Malen scored his first Bundesliga goal since joining Dortmund in the offseason from PSV Eindhoven, but Stuttgart fought back through Roberto Massimo before Reus had the final say.

“We stayed at it and were rewarded with the goal,” Dortmund coach Marco Rose said.

Basking in the novelty of a sold-out stadium, Union Berlin defeated crosstown rival Hertha Berlin 2-0 in a largely peaceful derby and climbed to fifth.

First-half goals from Taiwo Awoniyi and captain Christopher Trimmel were enough for Union to claim the unofficial title of “Stadtmeister” (city champion) and leave Hertha floundering in 13th place, far from the European qualification spots it has targeted.

“We could have won 3-0 or even 4-0. A fully deserved derby win,” Union defender Marvin Friedrich said.

It was the first time since the coronavirus pandemic began that Union was permitted to sell out its 22,012-capacity stadium, and the first time that fans could attend the Berlin derby since November 2019.

Memories of trouble at that game meant a large police presence around the stadium. Berlin’s police said on Twitter that around 1,000 officers were on duty to “protect the game, the city, and of course the fans.”

On their previous visit to the eastern borough of Köpenick, Hertha supporters shot fireworks onto the field and at Union fans. Union goalkeeper Rafał Gikiewicz confronted his own team’s angry supporters to stop them reaching Hertha fans after the game.

There was only a brief interruption to the game this time, from a solitary firework when it was already apparent that Union would win.

Awoniyi opened the scoring in the eighth minute, taking advantage of a defensive mistake from Márton Dárdai and tucking his shot inside the left post. It led to an eruption of sound. Journalists in the press area shielded their laptops as some fans jettisoned their drinks.

The visitors lacked the cutting edge to trouble Andreas Luthe in the Union goal.

It proved the difference between the sides as Trimmel scored the second goal off a corner when he let fly from distance and saw his shot go past several players and inside the far post in the 30th.

Hertha had a good chance on a counterattack after the break when it had three forwards against just two defenders, but Marco Richter’s cross went over all his teammates. It summed up the visitors’ game.

“The chances we had were harmless,” Hertha coach Pál Dárdai said.

Only fans who showed proof of vaccination or recovery from COVID-19 were allowed to attend under restrictions meant to limit the risk of infection. No alcohol was served at the game. Germany is going through a fourth wave of coronavirus infections and the national rate has been climbing every day.

Union beats Leipzig 2-1 to climb to 4th in Bundesliga