MACL: No circumstances would arise for a scheduled flight to be cancelled 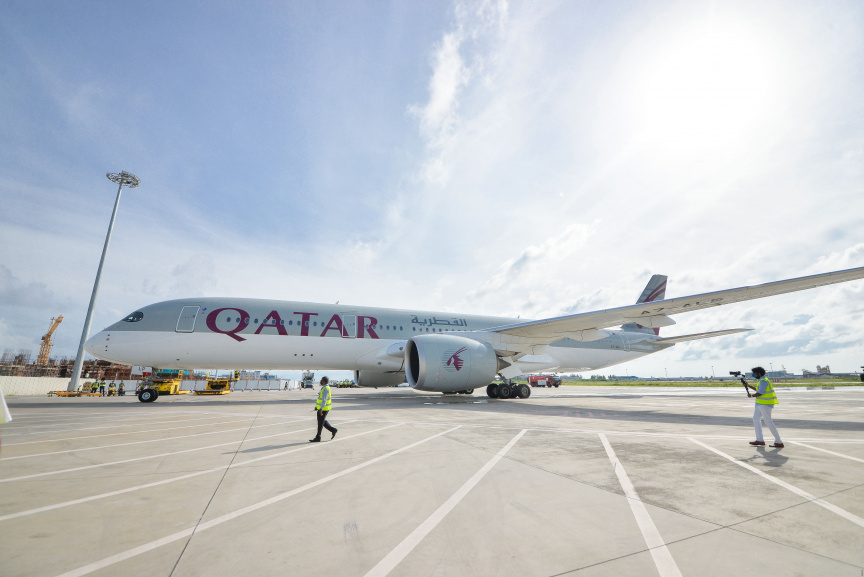 A Qatar Airways flight at Velana International Airport on July 15, 2020. The flight is the first commercial flight to operate to Maldives after the coronavirus pandemic lockdown in 2020. (Sun Photo/Fayaz Moosa)

Maldives Airports Company Limited (MACL) has stated that the circular being released briefing how flights to Velana International Airport will be managed during this year’s peak season, otherwise known as winter season – has not led to a situation where a scheduled flight of an airline has had to be cancelled.

In a statement released by MACL following a report made by a media in reference to their circular, claiming that flights were cancelled due to it – MACL said that the same circular has been released by them consecutively every year, since 2018. They further added that the circular is released for the purpose of briefing airlines on how to prepare for the peak season.

The report that flights would have to be cancelled was made by a Swiss media outlet. The report claimed that some scheduled flights to the Maldives by the Swiss airline, Edelweiss Air, had to be cancelled due MACL’s circular.

In a statement released by MACL to clarify the matter, they said that airlines are allocated slots based on international regulations.

“The airport has always allocated slots for all airlines when they request for it as per international regulations. Prior to the pandemic, Edelweiss had scheduled flights to the Maldives on every Thursday, Friday and Saturday. Amidst the pandemic, they cancelled the scheduled flights for Thursday and Friday,” the statement read.

MACL said that when Edelweiss put in the request for additional slots later on, discussions were held between both parties, after an agreement was come to – to allow them to operate flights three days per week.

MACL further stressed that slots given to a particular airline will not be transferred to another, unless the slot-holding airline cancels it. They also noted that airlines requesting additional slots will be allocated such as the capacity allows them to.

Additionally, MACL said that its goal is to provide exemplary services up to international standards without discriminating between airlines.