A decade after New Zealand mine explosion, bodies are found 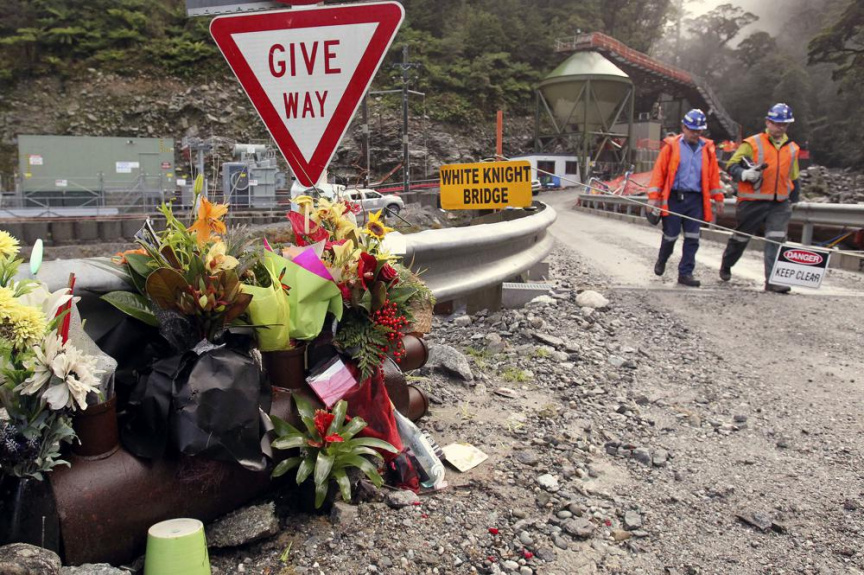 Workers walks past a bouquet of flowers for victims of mine explosion at the Pike River mine at Greymouth, New Zealand on June 28, 2011. (Ian McGregor/Pool Photo via AP, File)

WELLINGTON, New Zealand (AP) — More than a decade after a methane explosion killed 29 workers at a New Zealand coal mine, police said Wednesday they have finally found at least two of the bodies thanks to new camera images.

But authorities say the main part of the Pike River mine remains too dangerous to enter so they will not be able to recover the remains.

Police have been investigating the disaster for years, with some family members of the miners hoping they will eventually file criminal charges.

Police Detective Superintendent Peter Read said they had located at least two bodies and possibly a third after a camera was sent down a newly dug hole. He said the bodies were found at the far end of the mine, where methane levels remain high.

Read said imaging technology had improved markedly since the disaster, which helped them make the discovery.

He said they hadn’t yet been able to identify the bodies, although they were working with forensic experts to see if that was possible. He said they had previously identified the six or eight miners believed to have been working in that area at the time.

“This is only two days away from the eleventh anniversary of the mine explosion, and we’d like to acknowledge the families of all the men,” Read told reporters. “It’s a really stark reminder of the pain and the loss.”

He said the discovery would help their investigation.

Read said police wouldn’t be releasing the images out of respect to the families and declined to describe the conditions of the bodies.

“It’s what you might expect after 11 years, but I’m not really going into any details of what the images show,” he said.

Anna Osborne, whose husband Milton was killed in the explosion, said she’d been preparing for the 11th anniversary and was initially shocked by the announcement. She wondered at first if one of the bodies could be her husband but then realized he would have been elsewhere in the mine.

She said she felt some pride because the families had pushed hard for authorities to re-enter a safer part of the mine, which they had finally done in 2019. She said that helped reinvigorate the police investigation.

“I think that our men deserve justice,” she said.

Osborne said it was unfortunate the bodies couldn’t be retrieved.

“They all died together and they will all stay together,” she said.

An earlier investigation concluded the Pike River Coal company had exposed miners to unacceptable risks as it strove to meet financial targets. The report found the company ignored 21 warnings that methane gas had accumulated to explosive levels before the disaster.

The company, which went bankrupt, didn’t contest labor violation charges against it.

Labor violation charges against former chief executive Peter Whittall were dismissed after he and the company made a financial settlement, a development that angered many of the grieving families.