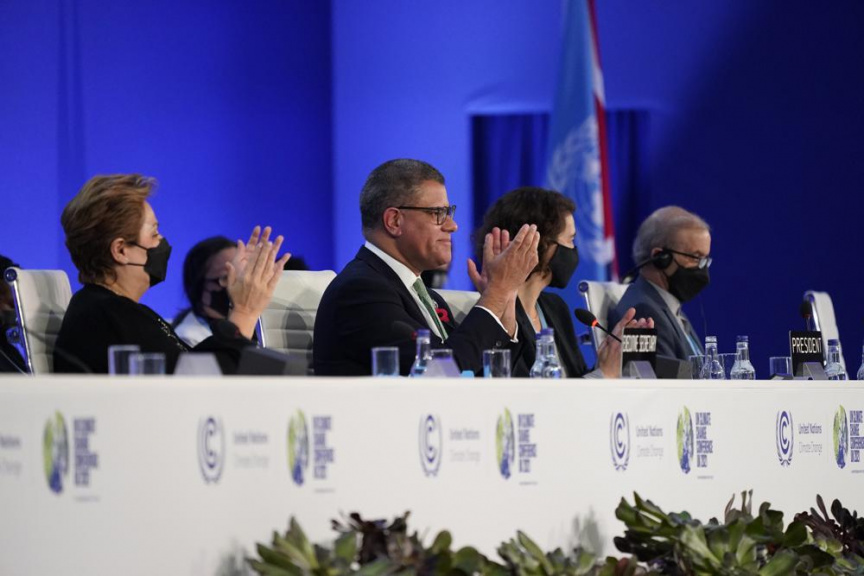 Several countries, including small island states, said they were deeply disappointed by the change promoted by India to “phase down,” rather than “phase out” coal power, the single biggest source of greenhouse gas emissions.

“Our fragile planet is hanging by a thread,” United Nations Secretary-General Antonio Guterres said in a statement. “We are still knocking on the door of climate catastrophe.”

Nation after nation had complained after two weeks of U.N. climate talks in Glasgow, Scotland, about how the deal did not go far or fast enough. But they said it was better than nothing and provided incremental progress, if not success.

In the end, the summit broke ground by singling out coal, however weakly, by setting the rules for international trading of carbon credits, and by telling big polluters to come back next year with improved pledges for cutting emissions.

But domestic priorities both political and economic again kept nations from committing to the fast, big cuts that scientists say are needed to keep warming below dangerous levels which would produce extreme weather and rising seas capable of erasing some island nations.

Ahead of the Glasgow talks, the United Nations had set three criteria for success, and none of them were achieved. The U.N.’s criteria included pledges to cut carbon dioxide emissions in half by 2030, $100 billion in financial aid from rich nations to poor, and ensuring that half of that money went to helping the developing world adapt to the worst effects of climate change.

“We did not achieve these goals at this conference,” Guterres said. “But we have some building blocks for progress.”

U.S. climate envoy John Kerry said governments had no choice but to accept India’s coal language change: “If we hadn’t done that we wouldn’t have had an agreement.”

But he insisted the deal was good news for the world.

“We are in fact closer than we have ever been before to avoiding climate chaos and securing cleaning air, safer water and healthier planet,” he said later at a news conference.

Many other nations and climate campaigners criticized India for making demands that weakened the final agreement.

“India’s last-minute change to the language to phase down but not phase out coal is quite shocking,” said Australian climate scientist Bill Hare, who tracks world emission pledges for the science-based Climate Action Tracker. “India has long been a blocker on climate action, but I have never seen it done so publicly.”

Others approached the deal from a more positive perspective. In addition to the revised coal language, the Glasgow Climate Pact included enough financial incentives to almost satisfy poorer nations and solved a long-standing problem to pave the way for carbon trading.

The agreement also says big carbon polluting nations have to come back and submit stronger emission cutting pledges by the end of 2022.

Negotiators said the deal preserved, albeit barely, the overarching goal of limiting Earth’s warming by the end of the century to 1.5 degrees. The planet has already warmed 1.1 degrees Celsius (2 degrees Fahrenheit) compared to preindustrial times.

Governments used the word “progress” more than 20 times Saturday, but rarely used the word “success” and then mostly in that they’ve reached a conclusion, not about the details in the agreement. Conference President Alok Sharma said the deal drives “progress on coal, cars, cash and trees” and is “something meaningful for our people and our planet.’’

“It’s meek, it’s weak and the 1.5 C goal is only just alive, but a signal has been sent that the era of coal is ending. And that matters,” said Greenpeace International Executive Director Jennifer Morgan, a veteran of the U.N. climate talks known as the Conferences of Parties.

Former Irish President Mary Robinson, speaking for a group of retired leaders called The Elders, said the pact represents : the pact represents “some progress, but nowhere near enough to avoid climate disaster....People will see this as a historically shameful dereliction of duty.”

Indian Environment Minister Bhupender Yadav argued against a provision on phasing out coal, saying that developing countries were “entitled to the responsible use of fossil fuels.”

“For heaven’s sake, don’t kill this moment,” Timmermans pleaded. “Please embrace this text so that we bring hope to the hearts of our children and grandchildren.”

Helen Mountford, vice president of the World Resources Institute think tank, said India’s demand may not matter as much as feared because the economics of cheaper, renewable fuel is making coal increasingly obsolete.

“Coal is dead. Coal is being phased out,” Mountford said. “It’s a shame that they watered it down.”

Kerry and several other negotiators said that good compromises leave everyone slightly unsatisfied and that countries had more work ahead of them over the coming years.

“Paris built the arena and Glasgow starts the race,” the veteran U.S. diplomat said. “And tonight the starting gun was fired.”

“I think our biggest success is to finalize the rulebook,” Zhao told the Associated Press. “Now we can start implementing it and delivering it on our achieved consensus.”

Among those highlighting the cost of failure was Aminath Shauna, the Maldives’ minister for environment, climate change and technology.

Shauna pointed out that to stay within the warming limit nations agreed in Paris, the world must cut carbon dioxide emissions essentially in half in 98 months — a formidable task.

“The difference between 1.5 and 2 degrees is a death sentence for us,” she said.

Yassmin Fouad Abdelaziz, Egypt’s environment minister, said next year’s talks to be held in the Red Sea resort of Sharm el-Sheikh would focus on aid and compensation for poor countries.

As negotiators left the final session after congratulating themselves, they passed a young lone protester who sat silently with red blood-like writing on crossed arms that said: “We are watching.”

All-female aquanaut crew on mission to save Maldives