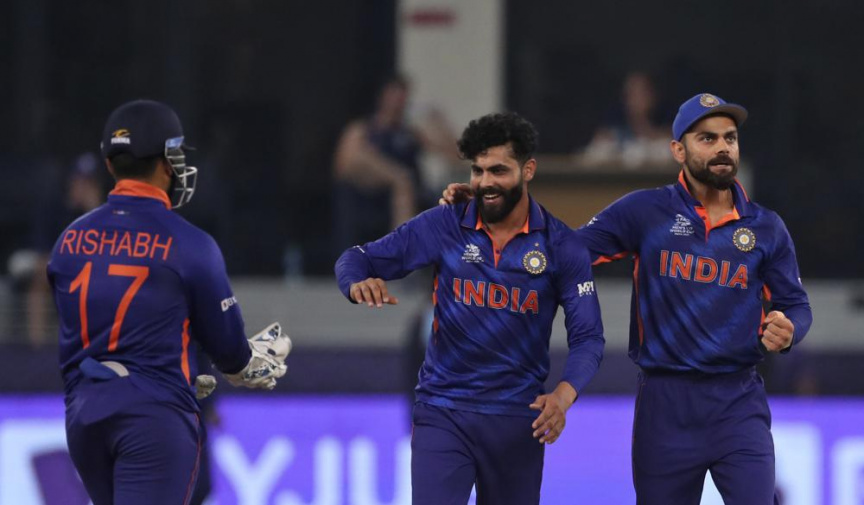 DUBAI, United Arab Emirates (AP) — India couldn’t afford to lose at the T20 World Cup and it didn’t on Friday when it thrashed Scotland by eight wickets.

In doing so, the one-time champion kept alive its slim chance of reaching the semifinals next week.

India squared its win-loss record at 2-2 with a last group game on Monday against Namibia. But it will be for naught if New Zealand beats Afghanistan on Sunday to advance.

Scotland was forced to bat first and was dismissed for 85 in 17.4 overs. India achieved the winning target at 89-2 in only 6.3 overs, improving its net run rate above New Zealand’s and Afghanistan’s.

“We’re glad to be back in our mojo,” India captain Virat Kohli said. “We spoke about (conceding to Scotland) 100, 120 max but we restricted them to a total that allowed us to leapfrog everyone else.”

India’s decision to make the Scots bat first turned out better than it hoped for.

The rout was started and finished by Jasprit Bumrah, who bowled captain Kyle Coetzer in a wicket maiden third over, and bowled Mark Watt to end Scotland’s innings and become India’s leading wicket-taker in T20s, eclipsing Yuzvendra Chahal’s 63.

Coetzer’s opening partner, George Munsey, responded by hitting three consecutive boundaries in Ravichandran Ashwin’s first over. But Munsey was gone for 24 after mistiming Mohammed Shami and falling to a diving catch by Hardik Pandya.

Ravindra Jadeja took the next three wickets to reduce Scotland to 58-5 in the 12th over.

“The first wicket was the special one,” Jadeja said. ”Whenever you get a batter out on a turning ball, it’s special.”

The 16th over bowled by Shami was eventful: In three consecutive deliveries, Calum McLeod’s off stump was knocked off, new batsman Safyaan Sharif was run out too easily, and Alasdair Evans was yorkered.

India knew it could better the net run rate of its immediate group rivals if it reached the target within 7.1 overs.

Openers KL Rahul and Rohit Sharma made it look easy.

Rahul hit three boundaries off Brad Wheal in the second over.

Sharma asked for a new bat midway through the fourth over after hitting three boundaries and a six over midwicket. With the new bat, he caught up to Rahul on 26.

Their partnership of 70 in five overs ended when Sharma was lbw to Wheal, after 30 off 16.

Needing only four runs to win and going for it, Rahul was caught at long on for 50 off 19 balls. He smashed six boundaries and three sixes.

“We were outclassed in every department,” captain Coetzer said. “But the only way we’ll improve is going through games like that and seeing it head on.”

Shane Warne, one of cricket’s icons, dies at 52

Xavi Hernández to return to Barcelona as its new coach