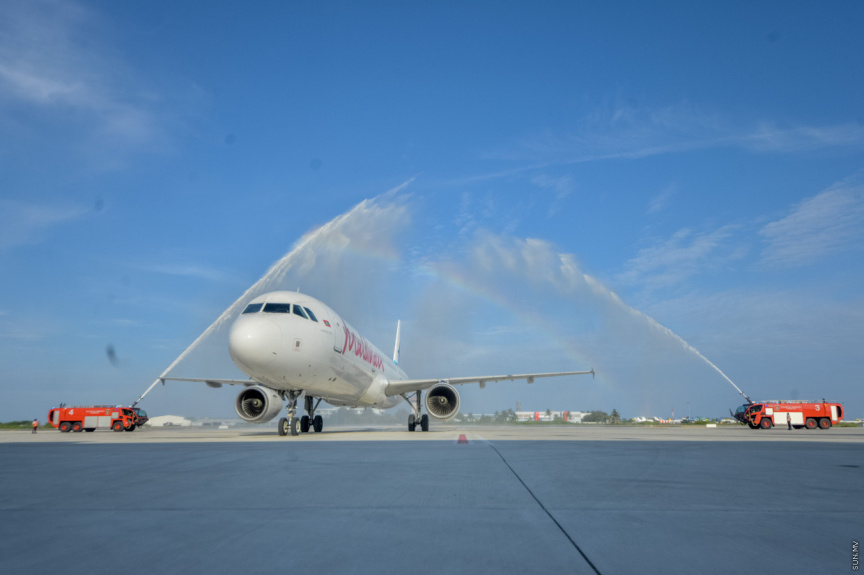 The new apron constructed at Velena International Airport (VIA) under major development project worth MVR 1.2 billion – has been officially inaugurated.

The newly developed ‘Apron 3B’ was inaugurated this evening at approximately 16:08pm. During the inauguration ceremony – an aircraft of the national airline, Maldivian, had parked in the new apron.

As the first aircraft to land at the new apron – Maldivian’s Airbus A321 was welcomed with a water salute.

The inauguration ceremony of the new apron at VIA was attended by the airport’s operator, Maldives Airports Company Limited’s CEO, Managing Director Gordon Andrew Stewart.

Speaking to the media after the inauguration ceremony – Gordon said that the new apron will bring further easements to passengers, adding that it was constructed in order to provide their services even faster.

“Apron 3B is situated right in front of the domestic terminal. Passengers departing and arriving will see a lot of easements due to this. Moreover, our services will become speedier for sure. We will be increasing security and safety features at this apron. This will enhance passengers’ airport experience,” he had said.

Speaking further – Gordon revealed that MACL is seeking additional employees with the number of tourist arrivals to the Maldives increasing. On this note – he said that there are plans to handpick over 700 new employees.

Citing that MACL is working on identifying the instruments lacking to serve passengers during the peak season – Gordon said that thousands of dollars would be invested to procure such instruments identified.

In addition to this – Gordon also revealed plans of introducing electronic checking counters at VIA in mid-next year.

Maldives currently sees the arrival of 4,494 tourists daily on an average - with total arrivals for this year surpassing one million.