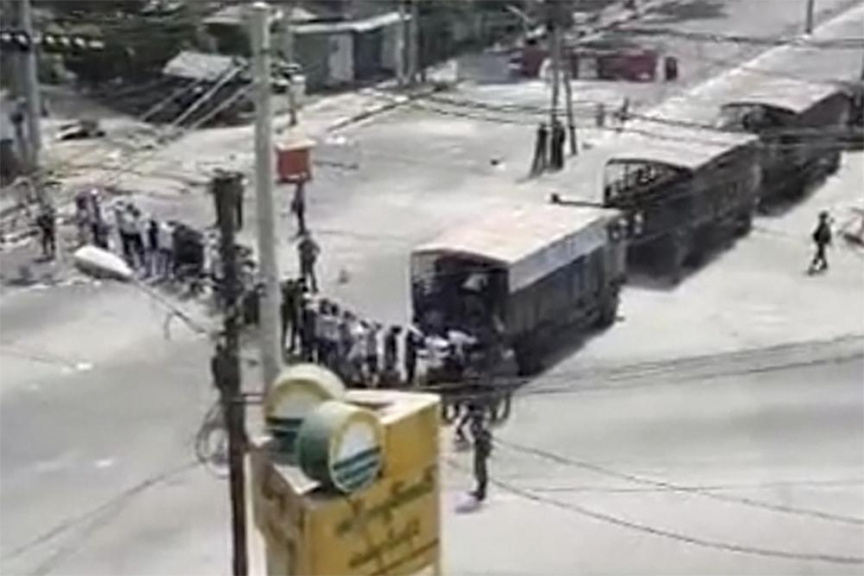 FILE - In this image from video obtained by The Associated Press, soldiers line up arrested protesters in Yangon, Myanmar on March 3, 2021. (AP Photo/File)

SYDNEY (AP) — The U.S. State Department expressed outrage and demanded an investigation on Friday after The Associated Press reported that Myanmar’s military has been torturing detainees in a systemic way across the country.

The United Nations’ top expert on human rights in Myanmar also called for strong international pressure on the military. And lawmakers in Washington urged Congress to act in the wake of AP’s investigation, which was based on interviews with 28 people, including women and children, imprisoned and released since the military took control of the government in February.

“We are outraged and disturbed by ongoing reports of the Burmese military regime’s use of ‘systematic torture’ across the country,” the State Department said, using Myanmar’s other name, Burma. “Reports of torture in Burma must be credibly investigated and those responsible for such abuses must be held accountable.”

AP’s report, which included photographic evidence, sketches and letters from prisoners, along with testimony from three recently defected military officials, provides the most comprehensive look since the takeover into a highly secretive detention system that has held more than 9,000 people. The AP identified a dozen interrogation centers in use across Myanmar, in addition to prisons and police lockups, based on interviews and satellite imagery.

Security forces have killed more than 1,200 people since February, including at least 131 detainees tortured to death.

The AP found that the military, known as the Tatmadaw, has taken steps to hide evidence of its torture. An aide to a high-ranking commander told the AP that he watched security forces torture two prisoners to death. Afterwards, he said, soldiers attached glucose drip lines to their corpses to make it look like the men were still alive, then forced a military doctor to falsify their autopsy reports.

“The AP’s investigation sheds important light on the scope and systemic nature of the junta’s criminal torture campaign,” U.N. special rapporteur on Myanmar, Tom Andrews, said in a statement. “The confession of military personnel who directly witnessed detainees being tortured to death will be important for accountability efforts, as well as the AP’s uncovering of torture and interrogation center locations.”

Given the military’s efforts to hide its abuses, Andrews said the accounts in AP’s report are “very likely just the tip of the iceberg.”

U.S. Rep. Michael McCaul of Texas, the top Republican on the House Foreign Affairs Committee, urged the House to hold a vote on the BURMA Act in light of the findings. The legislation would authorize additional targeted sanctions against the military.

While the U.S., United Kingdom and European Union have already placed sanctions on high-ranking Myanmar military members and state-owned enterprises, they have yet to sanction American and French oil and gas companies working in Myanmar. That has allowed the military to maintain its single-largest source of foreign currency revenue, which the Tatmadaw uses, in part, to purchase weapons.

“The disturbing reporting by the Associated Press on the sadistic torture and horrific violence committed by the Burmese military junta are sadly the latest in a long string of their atrocities, including genocide against the Rohingya,” McCaul said in a statement, referring to the military’s mass slaughter and rape of thousands of Rohingya Muslims in 2017.

“I condemn the Burmese military’s unconscionable treatment of detainees, allegedly including victims as young as 16 years old, in the strongest possible terms,” Meeks said in a statement.

The administration is considering sanctions that could impact Myanmar’s oil and gas industry but has yet to make a decision, according to officials familiar with the process. These officials say privately that there is great internal debate among the National Security Council, the State Department and Treasury about how best to ensure that any sanctions imposed do not negatively affect the people of Myanmar.

“The AP’s searing and expansive investigation sheds light into the black-box of the Myanmar military’s detention facilities. The Tatmadaw’s methodical torture regime – and attempts to hide it from public view – demand immediate global acknowledgement and action,” said Susannah Sirkin, director of policy at Physicians for Human Rights. The group concluded that the wounds seen in photographs sent by the AP of three torture victims were consistent with deliberate beatings by sticks or rods.

The military did not respond to a request for comment on AP’s report. Earlier this week, it dismissed questions from the AP about its findings as “nonsense.”