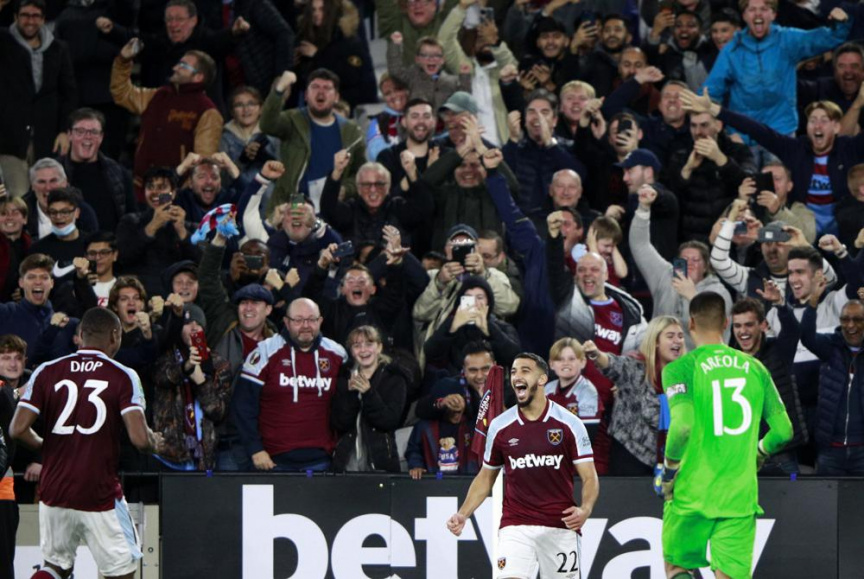 West Ham's Said Benrahma, center, celebrates after scores the winning penalty in a penalty shootout at the end of the English League Cup fourth round soccer match between West Ham United and Manchester City, at the London Stadium, in London, Wednesday, Oct. 27, 2021. (AP Photo/Ian Walton)

City lost 5-3 to West Ham in a penalty shootout in the last 16 on Wednesday after the game finished 0-0 after 90 minutes at the London Stadium.

That condemned City to its first elimination in the League Cup since losing to Manchester United at the same stage five years ago. Pep Guardiola’s deep squad had won the competition every season since the 2017-18 campaign, with six of the last eight editions going to City.

“Nothing is eternal,” Guardiola said. “We fought a lot to win and win this competition. Today it’s finished, and next season we’ll be back to win it again.”

It marked a brilliant Manchester double for West Ham, which eliminated Man United at Old Trafford in the last 32.

“We were playing against a City second team that could fight for the (Premier League) title,” West Ham captain Mark Noble said.

“What a night for the club.”

City might have rested a slew of key players including Ederson, Ruben Dias and Bernardo Silva, but stars like Kevin De Bruyne, Ilkay Gundogan and Raheem Sterling were in the team while Foden and Jack Grealish were among the substitutes who entered in the second half.

The League Cup has been regarded as a significant competition for City, with Guardiola using it to give fringe players some playing time and to build up his haul of trophies at the club since joining in the offseason of 2016.

Now the competition is open, with Liverpool, Tottenham and Leicester joining the quarterfinal lineup on Wednesday that also contains Chelsea and Arsenal.

Liverpool continued its unbeaten start to the season in all competitions by beating second-tier Preston 2-0, with Takumi Minamino and Divock Origi scoring in the second half.

Origi’s goal in the 84th minute was the highlight. The Belgium striker reacted to a loose ball just outside the six-yard box by flicking it with his heel over the goalkeeper and into the net.

Liverpool manager Jurgen Klopp named a completely different team to the one that started the 5-0 win over Man United on Sunday, with replacement right back Neco Williams having a hand in both goals.

In another penalty shootout, Leicester beat Brighton 4-2 in an all-Premier League encounter at King Power Stadium taking place on the three-year anniversary of a helicopter crash that killed the club’s chairman, Vichai Srivaddhanaprabha. There was a minute’s silence before kickoff.

The game finished 2-2, with Leicester going ahead twice — through Harvey Barnes and Ademola Lookman — only for Adam Webster and Enock Mwepu to score equalizers.

While Leicester scored all of its penalties in the shootout, Neal Maupay struck a spot kick against the crossbar for Brighton before Mwepu’s shot was saved by Danny Ward.

Lucas Moura scored Tottenham’s goal in a 1-0 win at Burnley, and Ivan Toney scored one goal and set up another for Brentford in a 2-1 win at second-tier Stoke.

Chelsea, Arsenal and third-tier Sunderland advanced to the quarterfinals on Tuesday.

The draw for the last eight takes place on Saturday.

Man U beats Forest 3-0, closes in on League Cup final